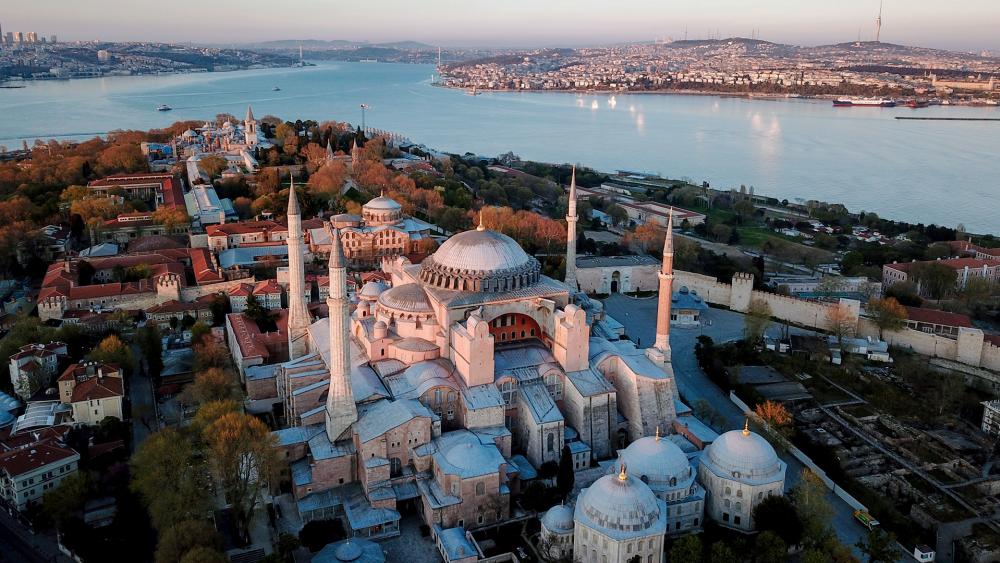 The Hagia Sophia Museum was once the main Christian cathedral of the Byzantine Empire.
6170813379001
Turkey's President Turns Historic Christian Hagia Sophia Site Into a Mosque - Muslims Chanting 'Allah Is Great'

Turkey's highest administrative court, the Council of State, ruled on Friday that the government can convert the historically Christian cathedral called Hagia Sophia into a Muslim house of worship. Turkish President Recep Tayyip Erdogan immediately took action to reconvert the site into a mosque.

It has long been the hope of many Turkish Muslims for the Hagia Sophia museum to be turned back into a mosque. Immediately after the ruling, dozens of people celebrated outside the Hagia Sophia, chanting “Allah is great!”

In its more than 1,400-year existence, the Hagia Sophia in Istanbul, Turkey served as the Byzantine Empire's main cathedral before being captured and turned into a mosque under the Ottoman Empire. Up until today, it had been a neutral museum, but Turkish President Erdogan had waged a campaign to turn it back into a mosque, despite worldwide opposition to that plan.

The massive structure had been changed from a mosque into a museum by the founder of modern Turkey, Mustafa Kemal Ataturk.

"Ataturk established Hagia Sophia as a museum to underline his vision of secularizing Turkey," says Soner Cagaptay, author of Erdogan's Empire. "And nearly 100 years later, Erdogan is trying to do the opposite."

The coronavirus outbreak has made Turkey's already weak economy even worse, with trade and tourism dropping dramatically.  And some suspect President Erdogan is using the Hagia Sophia issue to shore up his political base and distract attention from the poor economy.

"So, it's not about prayer space, it's not about building a mosque or providing a mosque where one does not exist," says Cagaptay. "It's rather using an issue of what I call 'Muslim nationalism' or emphasizing Turkey's Islamic identity at the expense of others to mobilize his right-wing and conservative base."

Pro-Erdogan leader Yunus Genc said, "Of course, someone who is Christian would be against Hagia Sophia reopening as a mosque, this is natural. But we're Muslim. And we want this monument to serve as a mosque in Istanbul where Muslims are a majority."

The Patriarch of Constantinople, Bartholomew I has warned that turning the museum into a mosque could bring "confrontation and conflict."

The European Parliament has also gone on record opposing the re-conversion. Even some Russian parliament members are upset. And the United States Commission on International Religious Freedom has demanded the plans be withdrawn.

First built in 360 AD, destroyed by riots and then rebuilt under Emperor Justinian, the Hagia Sophia has undergone several name changes and even had its dome replaced after an earthquake.