US Christians Help Rebuild Church as Raqqa Recovers from ISIS Terror: 'I Feel Like I Am a New Christian' 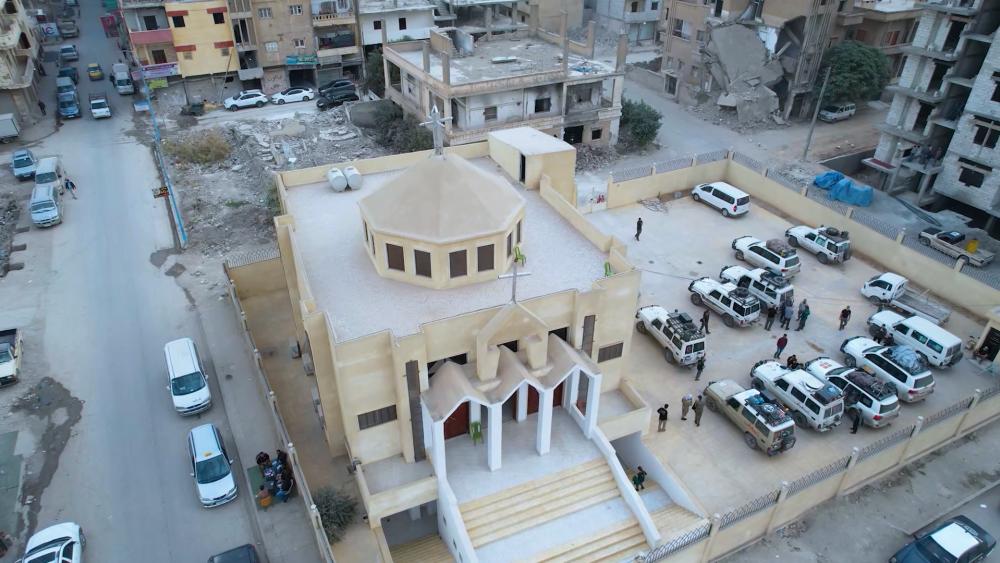 Image source: CBN News
6287139811001
Church Rebuilt as Raqqa Recovers from ISIS Reign of Terror: 'I Feel Like I Am a New Christian'

RAQQA, Syria – When the Islamic State seized Raqqa in 2014, Christians and other minorities who had lived in the Syrian city for generations paid a heavy price. Many were killed and thousands fled. Now that ISIS has been defeated there, people are picking up the pieces and doing their best to resume normal life.

Before Syria's 10-year civil war, thousands of Armenian and Syriac Christians lived here in Raqqa, and many attended the city's two main Christian churches. Then ISIS seized Raqqa and made the city its capital, forcing most believers to flee. Those who stayed faced brutality in the form of beheadings, crucifixions, and sexual slavery.

Syrian Democratic Forces backed by the United States eventually defeated ISIS in 2017, opening the city to humanitarian relief.  When the aid group called the Free Burma Rangers first made it to Raqqa, the city lay in ruins. The former Armenian Church of the Forty Martyrs was just a shell of a building.

Dave Eubank, founder of the Free Burma Rangers, said in a video at that time, "It's four February 2018 in Raqqa, and this is the remains of one of the churches in Raqqa, and our prayer is that it will rise again.  Thanks for praying."

"I am friends with David Eubank, and he told me he was going to Iraq and Syria and I asked him if he had any needs. And one was particularly rebuilding the church in Syria, and that captured my heart and I wanted to be part of that," Pastor Tae said.

His church raised $60,000 to help rebuild the church facility. This year, Tae got to come to Syria to see it rededicated, and CBN News was able to visit the site as well.

Before ISIS took over Raqqa in 2014, there were about 150 families that used to attend this church. Now there are really only about 12 Christian believers left here. But the building has been rebuilt, and with the help of the Free Burma Rangers and many people who donated money, this remnant of believers was able to rededicate their new building to God and pray that He will send more believers to fill the pews.

One Armenian man told us, "After many years we can finally return to being Armenians. I feel like I am a new Christian all over again. Praise God we now have a place to come and worship and make the sign of the cross!"

This CBN News reporter visited the now liberated square where ISIS notoriously drove in and did donuts in their tanks. ISIS also used to behead their victims and put their heads on a sculpture right here, and it wasn't that long ago. While people here are relieved that ISIS is gone, some of the fear remains.

Threats remain with terrorist cells still operating in the city. On the night we visited, a car bomb went off just a few blocks away from the church. Even so, residents here remain optimistic.

Commander Aram Hanna, an Armenian Christian, told us, "We are few in Raqqa but it is something...a miracle for us to see us together again. We are 12 people, yes, but we are power, we are strength, we have each other and we will start again."

For their part, the Free Burma Rangers are continuing to help the people of northern Syria, bringing the love of Jesus in the form of food distributions and games for the kids.

A Syrian teacher named Abu said, "All the village are glad for you come because you made their children happy and you support them spiritually."

The Rangers give God all the glory for what he's doing here.

Eubank explained, "That's how it was, this is how it is now. Thank you all you brothers and sisters in Jesus in America who prayed that this would happen, and people all over the world that prayed. Thank you. Look what happened. Look what God did!"