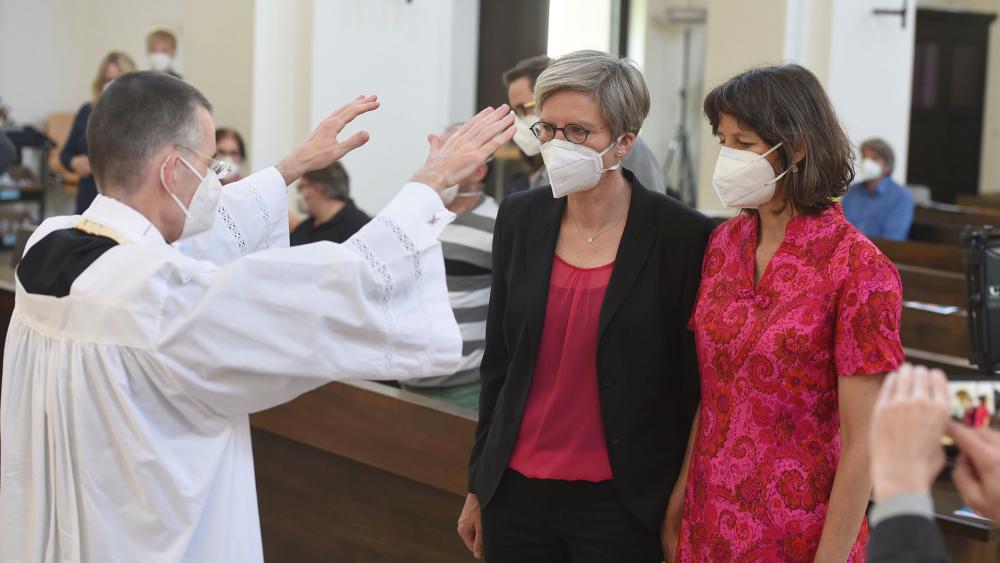 Vicar Wolfgang Rothe, left, blesses the couple Christine Walter, center, and Almut Muenster, right, during a Catholic service with the blessing of same-sex couples in St Benedict's Church in Munich, Sunday, May 9, 2021. (Felix Hoerhager/dpa via AP)

Germany's powerful Catholic progressives are openly defying a recent pronouncement from the Roman Catholic Church that priests cannot bless same-sex unions by offering such blessings at services in about 100 different churches all over the country this week.

The blessings at open worship services are the latest pushback from German Catholics against a Vatican document released in March.

The two-page explanation, published in seven languages and approved by Pope Francis, distinguished between the church's welcoming and blessing of gay people, which it upheld, but not their unions.

The Vatican holds that gays must be treated with dignity and respect, but that gay sex is "intrinsically disordered." Catholic teaching holds that marriage between a man and woman is part of God's plan and is intended for the sake of creating new life.

Since gay unions are not intended to be part of that plan, they cannot be blessed by the church, the document said.

"The presence in such relationships of positive elements, which are in themselves to be valued and appreciated, cannot justify these relationships and render them legitimate objects of an ecclesial blessing since the positive elements exist within the context of a union not ordered to the Creator's plan," the document said.

God "does not and cannot bless sin: He blesses sinful man, so that he may recognize that he is part of his plan of love and allow himself to be changed by him," it said.

Pope Francis has endorsed providing gay couples with legal protections in same-sex unions, but that is in reference to the civil sphere, not within the church.

Could Part of the German Church Leave the Catholic Church?

The dozens of German church services celebrating blessings of gay unions are the latest escalation in tensions between conservatives and progressives that have already sparked alarm that part of the German church could break with the Vatican.

Germany is no stranger to religious division. Martin Luther launched the Reformation there 500 years ago.

Pope Francis, who has championed a more decentralized church structure, has already reminded the German hierarchy that it must remain in communion with Rome during its reform process, known as a "synodal path."

In Berlin, the Rev. Jan Korditschke, a Jesuit who works for the diocese preparing adults for baptism and helps out at the St. Canisius congregation, will lead blessings for LGBTQ couples at a worship service on May 16.

"I am convinced that homosexual orientation is not bad, nor is homosexual love a sin," Korditschke told The Associated Press. "I want to celebrate the love of homosexuals with these blessings."

The 44-year-old said it is important that homosexuals can show themselves within the Catholic Church and gain more visibility long-term.

The head of the German Bishops Conference last month criticized the grassroots initiative for gay blessings which is called "Liebe Gewinnt" or "Love Wins."

Limburg Bishop Georg Baetzing said the blessings "are not suitable as an instrument of church political manifestations or political actions."

But, Germany's powerful lay organization, the Central Committee of German Catholics, or ZdK, which has been advocating for gay blessings since 2015, positioned itself once more in favor of them. It called the document from Rome "not very helpful" and explicitly expressed its support for LGBTQ blessings.

"These are celebrations of worship in which people express to God what moves them," Birgit Mock, the ZdK's spokeswoman for family affairs, told the AP.

The ZdK has been taking part in the "synodal path" meetings for more than a year with the German Bishops Conference. They are due to conclude in the fall. The meetings include talks about allowing priests to get married, the ordination of women, and a different understanding of sexuality, among other reforms. The process was launched as part of the response to revelations of clergy sexual abuse.

The Catholic News Agency reports a German Catholic group has appealed to the country's bishops to unite with Rome and stop the blessing of same-sex unions planned by some priests to begin this week.

In a statement, Clara Steinbrecher, leader of the Maria 1.0 group said: "The planned blessing celebrations are a targeted provocation in the direction of Pope Francis and should therefore be omitted by the priests."