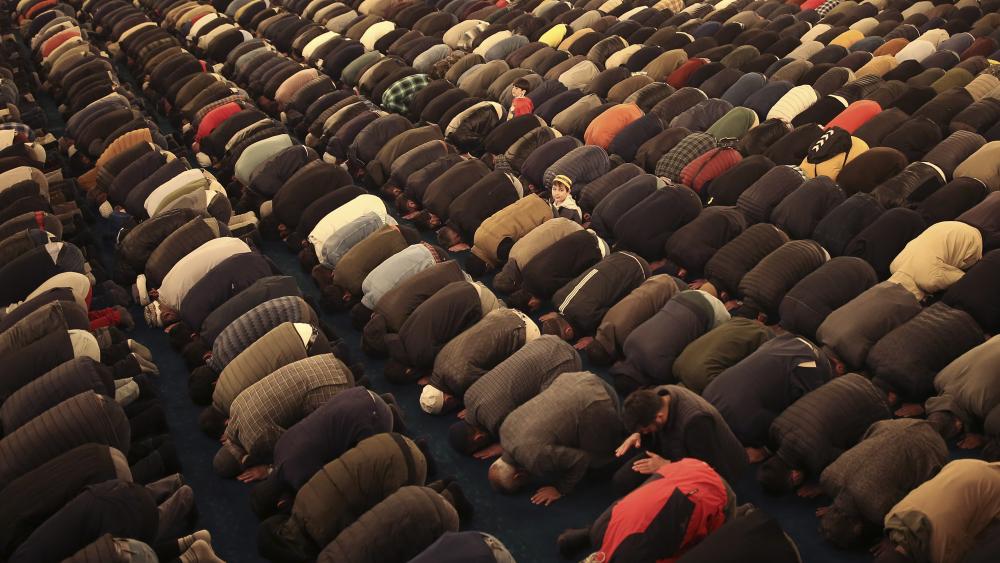 Muslim worshippers perform a night prayer called 'tarawih' during the eve of the first day of the Muslim holy fasting month of Ramadan in Turkey at Hagia Sophia mosque in Istanbul, Turkey, Friday, April 1, 2022. (AP Photo/Emrah Gurel)
6303711572001
Ex-Muslim Points to Jesus as Big Crowd of Muslims Takes Over Times Square for Ramadan Prayer

Muslims around the world began their month-long time of fasting and prayer called Ramadan last week. During the past two years, because of the COVID pandemic, many corporate prayer and community Iftar gatherings – meals ending the daily fast – were canceled.

This year is different. Public gatherings resumed around the world in places like Cairo, Jakarta, and of course, Mecca in Saudi Arabia.

In Istanbul, Turkey, Muslims celebrated the first Ramadan call to prayer at the Hagia Sophia since it was converted into a museum in 1934. Two years ago, the Turkish government had decided to re-convert the majestic, 1,500-year-old Christian cathedral into a mosque.

Five thousand miles away there was another first – this one in New York City. Muslims gathered for the first time to pray publicly in Times Square.

Some Christians complained that Muslims left their mosques to pray outdoors in the popular, tourist spot to stake a spiritual claim and territorial victory in America's financial capital.

Others say the Muslims conducted Ramadan prayers there because they wanted to show the world they are a religion of peace and tolerance.

Street preacher Samer Mohammed, a former Muslim that CBN News has featured in several news stories over the years, decided to respond peacefully with prayers of his own.

And because of his loud prayers, some people attending the Ramadan gathering peacefully confronted Samer, urging him to be quiet or leave Times Square.

The immigrant Christian reminded them that he has the right to free speech in America.

"You have the freedom to do, I have freedom to do if I want to do," he said. "You seem to be very ignorant," a Muslim replied. "No, I just said Jesus is Lord," Samer said.

CBN's The Global Lane asked Samer Mohammed to share with us how Christians should pray for Muslims during Ramadan. "We need to pray for this month of Ramadan that the Lord Jesus Christ open the eyes of the Muslim and he can come to the light of the Lord," he explained.

"We need to pray for all the Muslims in all the world. Let the peace of God come to them and show them what is the truth. Because only Jesus he's the truth and the way and the life. We pray for here, for America, for all the students, for the refugees. Let the Gospel come to them. And to know the truth," he said.

And let's remember our suffering brothers and sisters in Christ in Muslim countries, persecuted simply because they desire to worship Jesus freely, or profess their faith openly to others.

And let's pray for peace during Ramadan and for the upcoming Easter week. Often militant Muslims commit acts of violence against Christians and churches during this time.

Finally, let's pray that the scales will drop from blinded eyes, that people will see and feel the peace and joy that only Christ can give them, not only during Ramadan and Easter but for eternity.

Be sure to follow The Global Lane on the CBN News and NRB channels, social media, and our broadcast affiliates.