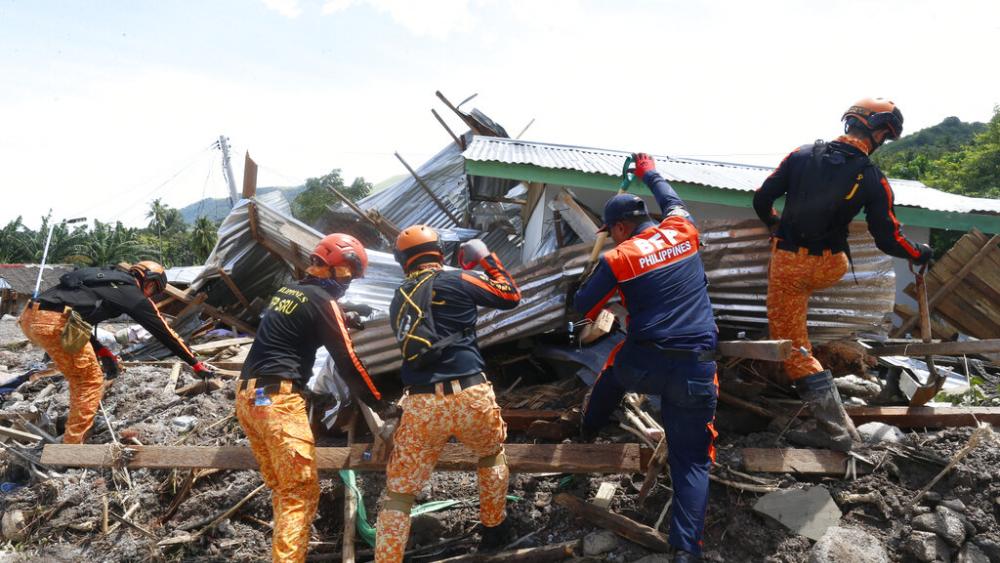 CAVITE, Philippines - At least 150 people were killed and dozens more are missing after Tropical Storm Nalgae lashed the Philippines. The destructive storm has affected more than a million Filipinos.

As it made landfall in the Philippines, Melissa Calisnao suddenly went into labor while fleeing the storm. Melissa and her husband, Joseph were so thankful that a midwife was present in the community hall where they evacuated. She gave birth to a baby boy on an office table that was immersed in floodwater.

Melissa's husband told CBN News, "I rushed my wife and 3-year-old son to the community hall, but we did not expect that she will give birth because she is only on her 8th month. I think she was so nervous."

Melissa said, "I was shocked to see my older son's clothes already wet because the floodwater already reached our bed. I quickly jumped out of bed with my son and rushed to the nearby hall. Then I felt the labor pains. It was so hard but I was so relieved and so happy to see my baby."

Flooding from Typhoon Nalgae affected thousands around Metro Manila and nearby provinces, including Miracle Mendez and her family. The strong current swept away the wall of the first floor of their house.

"When we felt our house trembling and the water already reached our chest, we rushed to the second floor, went out the window and crossed to the roof of our neighbor. We stayed there, my 3 kids and my parents from midnight until 6 in the morning when the floodwater started to recede," recalled Miracle.

All that Miracle could think of at that time was to save her three children and elderly parents.

She tearfully told CBN News, "We did not have food. There was nowhere to buy food because the water was still waist-deep. And that is why when my neighbor told me to list my name for Operation Blessing, we were given food last night. That was our first meal after the storm."

Thanks to Operation Blessing's One Step Ahead Program, many families were able to receive much-needed food bags right after the storm.

"Thank you very much, Operation Blessing. We immediately cooked the rice, noodles and the canned goods that you gave us," said Miracle.

Aside from physical food, Miracle and her family also received the best miracle as they prayed to receive Jesus in their lives.