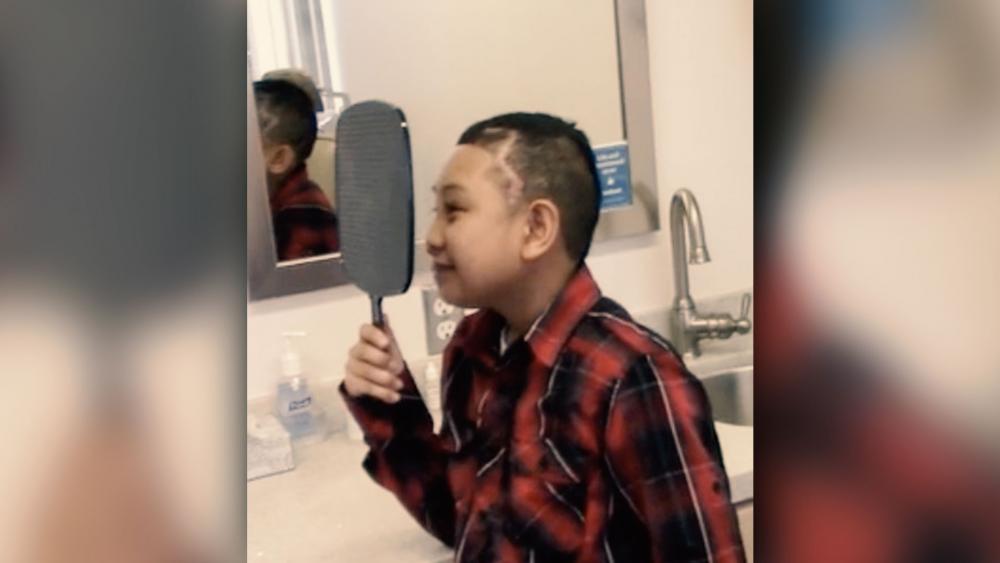 Abandoned at birth with a rare facial deformity, 11-year-old Ryder Reddig had never smiled before – until now, that is.

A North Dakota based family who adopted this sweet boy just posted a touching video (see below) that chronicles his trip to have reparative surgery, and shows the very moment he sees his new face – and smile – for the first time.

Ryder was obviously stunned – he'd been abandoned by his birth mother, bullied at school – and now, in an instant everything was different. This is what hope looks like, and it's absolutely beautiful. His mother had to stop the camera to hug him because it was an "overwhelming, emotional moment."

Ryder was born with a congenital defect which is a sac of brain tissue and fluid protruding from his skull, the Ryder's Hope fundraising page said.

At the age of five, Ryder was abandoned by his birth mother and was placed in a private orphanage. A place that was able to provide him with the love and care he needed through the sponsorship of a family in the United States.

Ryder participated in a Gillette, Wyoming hosting program designed for "hard to place" children, and that's where he and the Reddig family connected.

The family of four traveled to Wyoming from their home state of North Dakota and fell in love with the young boy immediately.

The list of Ryder's medical needs were long and they still continue to be. But because of his adoption, he's been able to get wonderful medical care stateside and a home with a family he's always dreamed about and prayed for.

But according to Alyson Reddig, the road has not been easy. Her son has been a victim of bullying because of his differences. So she hopes that these surgeries will build his confidence.

Since May of 2016 when the child arrived, the surgery list has been extensive. One on the list included brain surgery and also one for a prosthetic eye.

Ryder needed a new eye because of the rare facial deformity known as encephalocele which has left him blind, deaf and faced with paralysis on the right side of his face.

But on the upside, the next multistep procedure will lead to the young man having a full smile.

Dr. Babak Azizzadeh with The Facial Paralysis Institute in Beverly Hills, Calif. will be doing the surgery and he's excited about the opportunity.

Azizzadeh told ABC 7,"Once that nerve is activated and it takes anywhere from three to six months, we will then go get a muscle from his inner thighs. It's called a gracilis muscle. It's a very teeny muscle that we get." Then this will be attached to both nerves and blood vessels.

For Ryder to get his dream smile it will take roughly 18 months and cost the family thousands of dollars.

To raise funds to offset the expenses the family has started a fundraising page, so they can collect $5,000.

On the page the couple also lists out how you can help:

If God Called Your Entire Family to Mosul, Would You Go? This One Did…