Blast Off! How One Sick Little Boy's Dream to Go to Saturn Came True 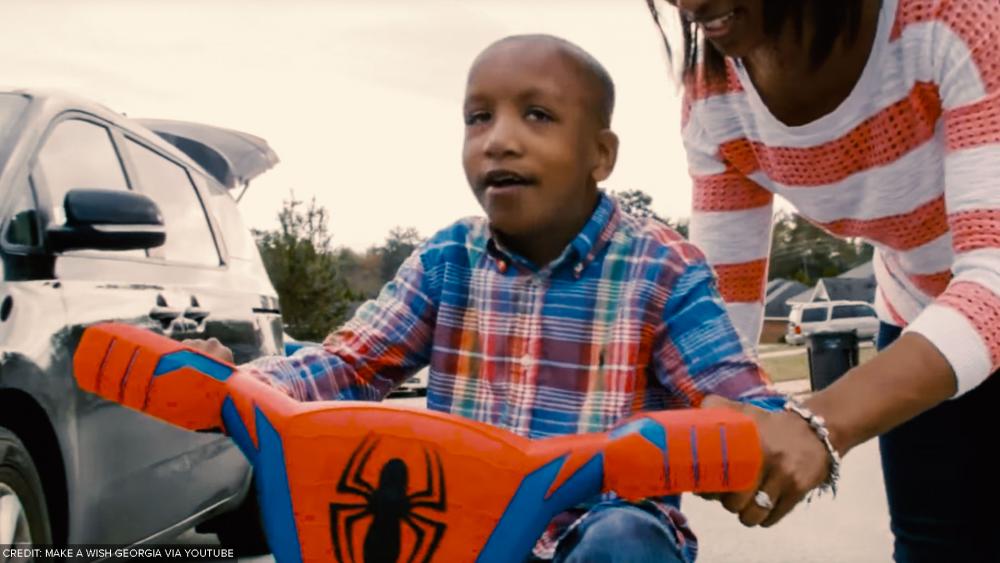 A seven-year-old with a congenital heart defect had one wish – to blast off to Saturn inside of a red rocket ship.

Now Zayden Wright's wish has come true with the help of virtual reality, thanks to the Make-A-Wish Foundation.

Zayden, who is from Augusta Georgia, made history as the first person to ever have their wish granted from the foundation using virtual reality.

But his path has not been an easy one.

At only two weeks old, Zayden underwent his first open heart surgery, and then had three more during his short life so far.

His mom Shonda Wright says her son has always had a fascination with "the stars, the sky and the moon."

"Ever since he was able to talk he would always say, 'Look up to the sky and make a wish,'" Wright said.

But when Zayden told Make-A -Wish he wanted to fly to Saturn, the foundation panicked.

"We went, 'We can't send a 7-year-old boy to Saturn,'" recalled Amy Alvarez, the chapter's vice president of marketing and communications.

"Traditionally we'd look at this wish and send them to space camp, but what's really important about Zayden is he has sensory issues so that wouldn't have worked," she explained.

Instead, Make-A-Wish leaders partnered with TRICK 3D, an Atlanta-based animation studio, to bring Zayden's exact vision of Saturn to life through the use of virtual reality.

TRICK 3D took Zayden's gift a step further using a recording of him describing to his mom what he imagined Saturn to look like, in order to build his virtual reality planet.

He described seeing a friendly alien on Saturn, so the virtual reality landscape included an alien named Beeebo, who is green with yellow antennas.

Chiao is known for making history in 2004 as the first NASA astronaut to vote in a presidential election from space.

He first met Zayden through a video in January when he learned about the plans to make his dream come true. He flew from Texas to Georgia to present the little boy with his astronaut suit.

The red rocket ship Zayden saw in his virtual reality headset was called the Zayden 7. His family along with 40 servicemen and women and the team who made it happen, were nicknamed "Zayden's squadron."

"It became so much bigger than we could have ever imagined because this little boy is so creative and imaginative," Alvarez said. "This special little boy has given us all so much hope and the true belief that if you can imagine anything, it can be possible if you just believe."

Zayden's mother said it was a tearjerker for she and her husband.

"There's times where we have to kind of tell him, 'OK Zayden, let's come back to reality,' because he can go so farfetched with his imagination," she said. "This was awesome."

"It was a tearjerker just to see our son being able to experience something like this, for him, just for him," Wright said. "He can't do everything the average kid does."