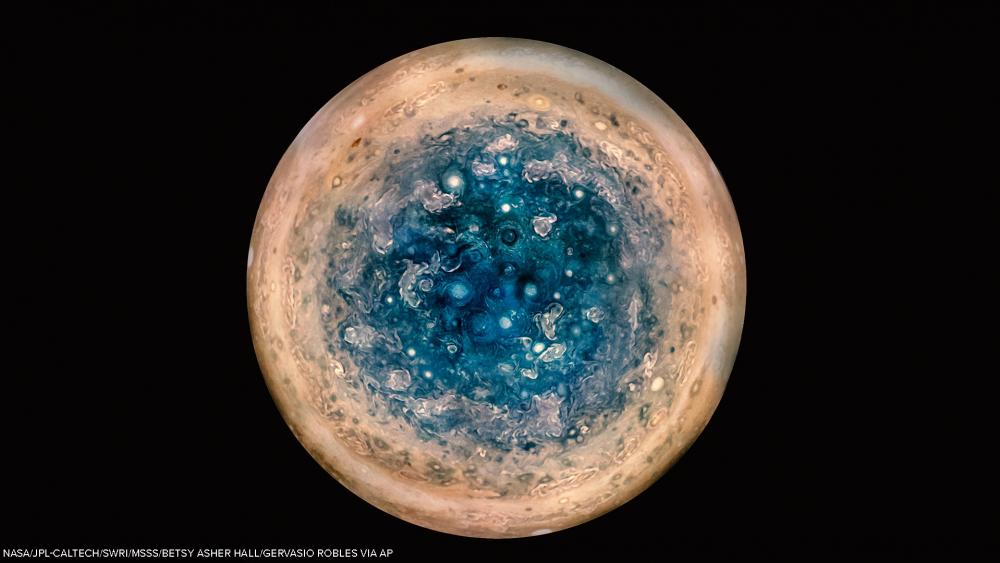 The Guardian reports the $1.1 billion probe went into orbit last July on a mission to get images from Jupiter and learn about its impact on other planets in the solar system.

"We were all jumping up and down with excitement when the images came down," said Fran Bagenal, a planetary space physicist at the University of Colorado.

Bagenal has been a part of the Juno mission for more than a decade.

"You've got to be patient, but the rewards are fantastic," Bagenal added.

The spacecraft survived an almost six-year voyage across space to reach Jupiter where it went under the planet's radiation belts and swept into an orbit that loops over the planet's north and south poles.

Juno's camera was able to get images of tall, white storm clouds above the planet as well as flashes of lightning that illuminate the sky.

"The weather is dramatic," said Bagenal. "What we thought we knew about Jupiter, we underestimated. It's more variable, there are more features, there is much more detail the closer you look."

Scott Bolton from the Southwest Research Institute in San Antonio describes it as the "planet on steroids."

Jupiter is described as an enormous gas giant made from hydrogen and helium. All of the other planets, asteroids and comets would fit within Jupiter. It is 11 times wider than Earth.

The time-lapse images showed them to be huge cyclones, rotating counter-clockwise in the northern hemisphere.

The storms reached up to 1,400 km wide, which is more than ten times the size of the largest cyclones on Earth. Scientists also found evidence for what they called an "equatorial plume," which is defined as a massive and unexpected overturning of gas driven by a steady upward stream of ammonia from around the planet's equator.

"It looks like a band that goes all the way round the middle of Jupiter," said Bagenal. The question is where does it go down?"

Juno also measured the magnetic field of the planet and found it to be twice as strong as scientists expected and ten time greater than the field that surrounds Earth.

In the next few months the spacecraft will build an unprecedented map of the planet's interior before it ends its mission.

One of the mysteries scientists are trying to solve is whether Jupiter has a solid core.