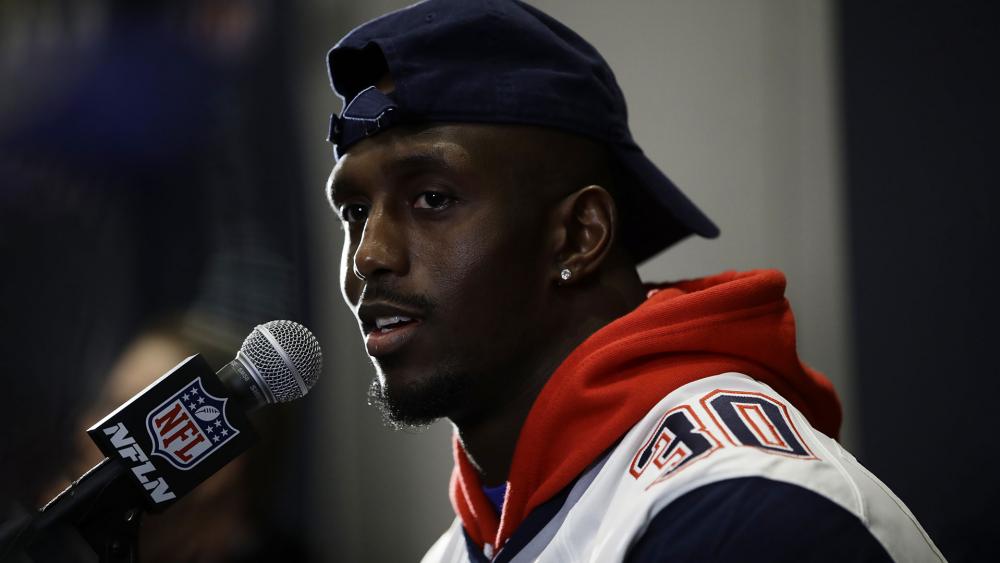 Football fans are gathering in Atlanta for the Super Bowl standoff between the New England Patriots and Los Angeles Rams.

Stories of faith have emerged from the pack of players on both teams in recent days, but CBN Sports has followed the story of the Patriots' Safety Devin McCourty for years. Devin has a twin brother, Jason, a cornerback who also plays on the Patriots. But that's not the main reason Devin has stuck with this team – it's because God told him to stay put several years ago.

The Patriots' victory over the Atlanta Falcons in Super Bowl LI was the biggest comeback in Super Bowl history. For McCourty, it was his second championship in three seasons with the team. But even with all of the celebration going on around him, his mind was on other things.

"My wife was pregnant. Probably really cutting it close for her to even be at the Super Bowl, all the emotions and the excitement. But, you know, finishing, hitting the parade, you know, getting to hang out with the guys for a night. Then we rush home before a snowstorm. We went to our house in New Jersey and we had nothing set up, no crib, no toys, no things to sleep in, bassinets," he recalls. "It turned into dad mode at home, assembling a bunch of different things that I didn't know about and just trying to prepare to be a father."

Growing up, Devin didn't have a dad. He and his twin brother Jason, were three when their father Calvin died from a heart attack. That left their mother, Phyllis to raise them and their older brother Larry alone. Most of what they knew about their dad came through stories told by family and friends.

But the stories were never enough because they couldn't replace their dad physically being there.

"Father's Day was always a tough one just because we always did something in school. You know, it was always something for Father's Day, whether it was to draw a card in class or, you know, some type of event that included sons and fathers."

As Devin and Jason got older, sports became a way to relate to their father.

"I truly believe, you know, when you don't have a ton of memories, but all you keep hearing about is how great of an athlete your father was, to me, and Jason too, sports was our connection," said Devin.

Though they didn't have a dad around, what they did have was a mom who loved them. Who even after she was injured on her job and had to go on disability, was able to provide for them.

"I'd be lying if I said, you know, it just felt so hard every day, it was—like honestly, growing up my mom made sure we had everything we needed," said Devin.

Most importantly, she took them to church, there Devin learned to lean on God for strength and guidance. Which carried him through high school, five years at Rutgers University and into the NFL in 2010. But after three successful seasons with the Patriots, he started depending more on himself, and less on his faith in God.

"I didn't rely on it all the time. I would say I still felt like, you know, I had a good amount of control. Like I can control what happened and, you know, God's given me strength so now I got to use the strength to control and do, you know, this is God here but this is me," said Devin.

Devin realized he needed to reconnect with God, but didn't feel like he could – even going to Bible study seemed out of reach.

"I was just like man, I'm not – I'm not a good enough Christian to be in Bible study. Just that guilty feeling," said Devin. "I would go out and, you know, drinking and, you know, partying. And it wasn't like I was the worst person in the world. But just, you know, I feel like – I feel like dang, everybody there's perfect and I'm not perfect."

He eventually pushed aside his guilt and made it to a team Bible study lead by the team chaplain. The message was just what he needed to hear.

"He's talking about that guilty feeling, there's nothing we can do to earn the right to be Christians and earn what Christ has done for us. Like you can't earn that. You know, that's given to you. You know, that's His mercy. And it just happened to be the day I walked in there and went. And it was kind of everything I was feeling that I was lacking. And was like it's right there, you know," said Devin.

Devin re-dedicated his life to Jesus Christ, giving Him full control. Now with God as a top priority, Devin learned to go to his Heavenly Father for big decisions. Like in 2014, when he became a free agent and was contemplating leaving the team.

That's when Devin began praying about whether to stay in Foxborough or move on to another team and city.

"You know, I was just praying. 'God, show me the way. Show me what's important for my life right now.' Not just money, not just winning. Show me what's important. And uh, the one thing that kept sticking out was what I felt I built here. I think that was God signaling to me, you know, this is –this is the place, you know. He's like football's great here. You love it, you've been here. He was like 'Let Me show you the next steps of your life.'"

He decided to stay in Foxborough, and his choice paid off big as he helped the franchise win their fifth title.

And now that he's married and has a daughter, he's got it everything in perspective, depending on "God the Father" to help him be the man, husband and father he needs to be.