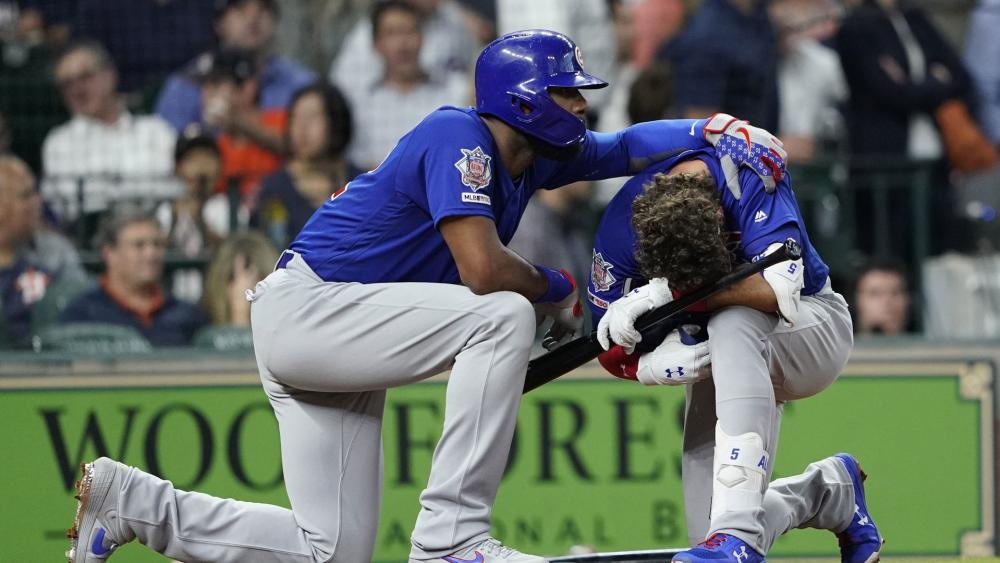 Chicago Cubs' Albert Almora Jr., right, is comforted by Jason Heyward after hitting a foul ball into the stands that struck a little girl in the head on May 29, 2019, in Houston. (AP Photo/David J. Phillip)

Chicago Cubs player Albert Almora Jr. was left guilt-ridden and gutted when his line-drive collided with a toddler in the crowd at the Houston Astros Stadium. The child was sitting behind third base when she was struck by the foul ball, causing her to let out a blood-curdling scream and plunging the entire stadium into an eerie silence.

Watching his ball strike the little one at lightning pace, Almora immediately sunk to his knees and burst into tears outside the batter’s box.

“As soon as I hit it, the first person I locked eyes on was her,” he said, according to the BBC.

"I'm speechless, at a loss for words. Being a father of two boys." Albert Almora speaks after scary foul ball incident: https://t.co/wIl0a3TxAr pic.twitter.com/ONxuzw85jA

Inconsolable and anxious to hear news of the girl’s condition, Jason Hayward and Cubs manager Joe Maddon comforted Almora as he attempted to compose himself and return to the game.

After returning to the bat, he struck out and walked off the field sobbing. In a break between innings, the Cubs star was seen asking a female security guard about the girl, before bursting into tears on her shoulder.

After Albert Almora Jr. struck a young fan with a foul ball, in between innings he went immediately over to that section to ask about the situation. You can see he is overwhelmed with emotion as him and the security guard have a moment. This is just a terrible & sad situation. pic.twitter.com/Yh3wWmDjhx

“It was kind of a blur, the rest of that at-bat, then after that half inning I went over to the stands… I just couldn’t hold it anymore,” he said. “I’m just praying, I’m just speechless, at a loss for words. Being a father for two boys – God willing I will be able to have a relationship with this little girl for the rest of my life.”

According to witnesses, while the girl was hurt, she was not seriously injured. David LeVasseur, the man who caught the stray ball, said that there were no traces of blood on it

“All we heard was screaming," he told the Houston Chronicle. “We saw this dad pick up a child and run up the stairs. He took off running.”

“I came upstairs and see the first-aid guys up there and the dad is holding the girl. She [was] alert, she’s conscious, she’s fine,” she added. “I was just going to give somebody in the family the ball. They kind of, naturally, shook it off. I asked the first-aid guy if she was OK and he said he didn’t know.”

Following the game, the Astros released a statement on the incident. “The young fan that was struck by a foul ball during tonight’s game was taken to the hospital,” the team noted. “We are not able to disclose any further details at this time. The Astros send our thoughts and prayers to the entire family.”

They added that the ball managed to go “through the protective netting.”

On social media, well-wishes poured in for the girl, along with messages of appreciation for the batter’s compassionate reaction.

“I’ve never seen a reaction like that before. Albert Almora has heart,” one person tweeted. “Shows he’s human and he cares. My heart goes out to him and the injured fan.”

“I want teammates with hearts like Almora,” another added.