FAITH-FILLED WEEKEND: That Time Tebow's John 3:16 Verse Went Viral, Then God Did Something Even Wilder 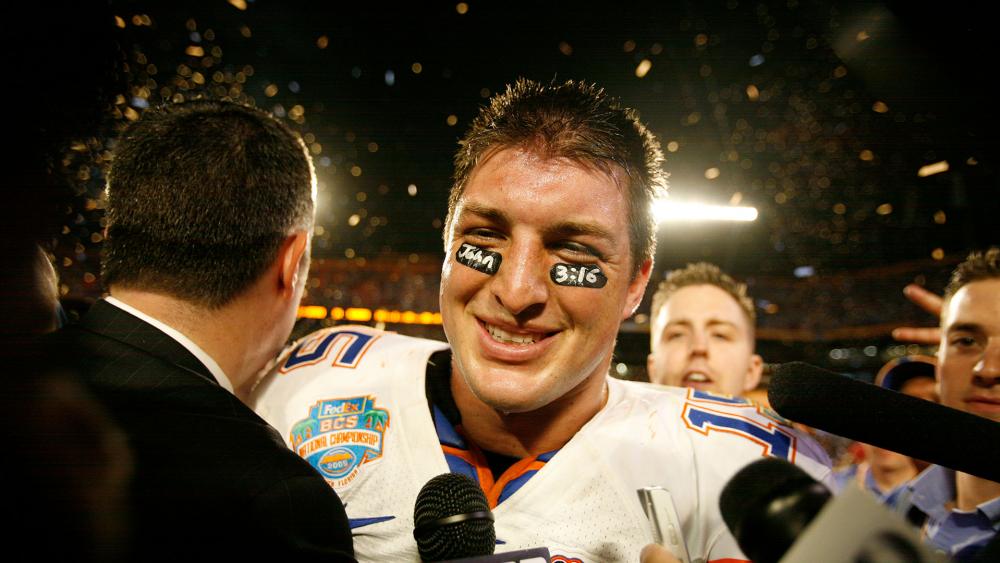 It's time for a CBN News Faith-Filled Friday.

It may not be news at this point, but if you haven't heard this story yet, be prepared to be blown away. More than nine million people have now seen a viral video of Tim Tebow recalling a powerful story from his football days that can't be explained by human understanding.

Tebow was a HUGE success in his college football years. The year was 2009 and he was weeks away from competing in the highly televised national championship football game.

Tebow said God led him at that point to change his regular Bible verse - the one he painted under his eyes - from Philippians 4:13 to John 3:16 for all the world to see while he played.

He points out John 3:16 contains the essence of the Bible's salvation message, so he felt God was calling him to share it on this big platform he was being given.

"For God so loved the world, that he gave his only begotten Son, that whosoever believeth on him should not perish, but have eternal life." - John 3:16

After the game, Tebow found out his new message had a huge impact. "During that game 94 million people Googled John 3:16," he recalls learning.

He says it taught him a lesson about how big God really is, and that God really wants to do big things through us because He can use one act of obedience in one moment in time to reach 94 million people with the gospel.

Tebow recalls, "We just happened to be playing the Pittsburgh Steelers in the first round of the playoffs... I didn't think of John 3:16 one time, so I can't take credit, I had nothing to do with it."

Then something truly wild happened. You might even call it supernatural.

After Tebow led the Broncos to beat the Steelers in that game, his PR guy came up to him and said, "Timmy did you realize what happened? This is exactly 3 years from the time you put John 3:16 under your eyes... you don't realize, during the game you threw for 316 yards. Your yards per rush were 3.16. Your yards per completion were 31.6. The time of possession was 31.06. And the ratings for the night were 31.6. And during the game, 90 million people Googled John 3:16, and it's the number one thing on all social media right now."

"And I was just standing in the hallway thinking, 'God I didn't know that you were doing anything. I thought that was like three years ago. But it's amazing how big the God is that we serve," he says.

"God has an awesome plan. He has an awesome plan, and you might not even see what He's doing. You might not even know how He's working. But the amazing thing is that when we step out and show a little courage, we step out and show a little boldness, what God can do with it in our lives, through our lives. But He's a big God," Tebow says.

"He's a big God and He can perform miracles," he says. "You have to understand, the God of this universe loves you so much that He sent His son to die for you. If He loves you that much, is He not gonna fight for you, is He not gonna come through for you?"

"That doesn't mean that life is gonna be easy. It's not. But it means that it's gonna be worth it."

What faith step is God asking you to make today? It's a question we can ask Him every day. Remember, God always has a plan. We're welcome to join Him at any time.

BELOW: More Than 9 Million People Have Watched Tim Tebow Sharing This Amazing Testimony