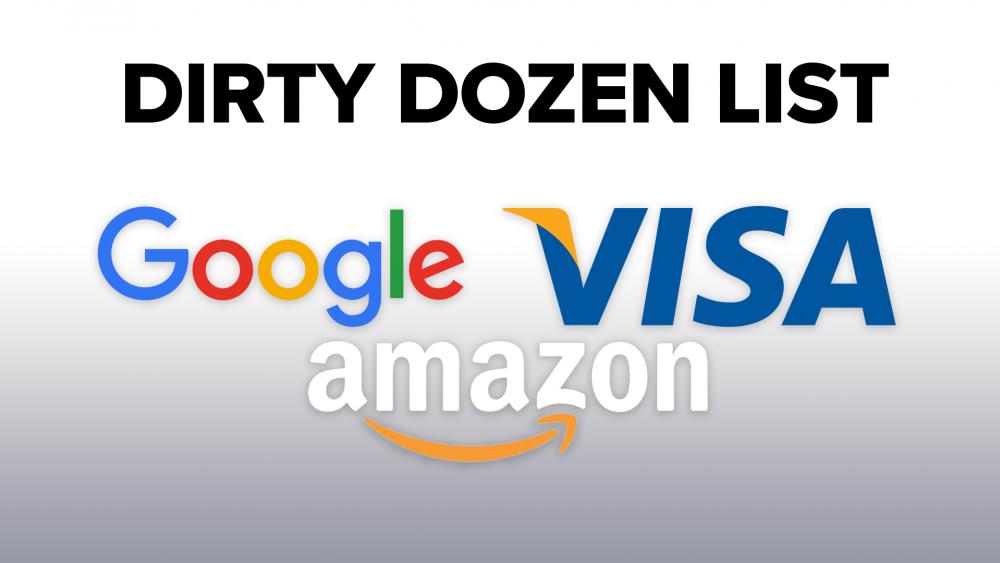 In an attempt to pull back the curtains and shame them, the National Center on Sexual Exploitation (NCOSE) releases its Dirty Dozen List each year.

The 2020 list includes such famous internet entities as Twitter, Google and Amazon, but also corporations like Visa, Wyndham Hotels & Resorts and Massage Envy. Sports Illustrated's Swimsuit Issue and the state of Nevada with its legalized prostitution are also noted.

Not Just About Tweets

"Most of us are on it. Unfortunately, they allow pornography on their site. And they're actually, because of that, facilitating sex trafficking accounts and prostitution accounts, often using pornography to advertise the sale of real people offline," McNamara said.

"A number of these pornography websites that Visa partners with have videos of sex-trafficked women and children and videos uploaded documenting child sexual abuse," she noted.

Visa Doesn't Have to do This

McNamara added, "Now Visa does have a choice in this. Even just this last year, PayPal stopped processing money for the pornography industry.  So we're calling on Visa to follow their example."

Spokesperson Jo Youngerman reached out for Visa to CBN News to answer NCOSE's charges, saying the company had this statement to offer: "Visa only permits transactions on the Visa network for the purchase or sale of lawful products and services.   We categorically prohibit transactions involving child pornography and human trafficking.  As a founding member of the Financial Coalition Against Child Sexual Exploitation, Visa works together with our coaltion partners to identify potentially illegal merchants or illegal activities and bar them from the Visa network."

Pointing a Finger at Wyndham

General Counsel Benjamin Bull told CBN News, "There are a lot of prominent national organizations that are facilitating sex trafficking and being used by sex traffickers."

Then he zeroed in on Wyndham, stating, "If you Google 'prostitution' and 'Wyndham,' you'll find several hundred complaints and allegations and lawsuits and criminal prosecutions against Wyndham for allowing sex trafficking to happen on the premises involving children."

As for Google, McNamara warned it hasn't stopped pedophiles creeping around on YouTube, and that's just one of many problems.

For instance, "Google Images often features hard-core pornography on the first page of results, even for scientific or basic search terms," she explained.

McNamara also went after Amazon, telling CBN News, "Not only do they have a web service that helps the pornography industry, but they also sell incest-themed, eroticized pornography books. They also sell sex dolls. So they're really normalizing actual, real-life abuses, trying to eroticize them and fetishize them."

"They make their profits off the backs of countless vulnerable and exploited and abused individuals," she added.

"In a world that's awash with the public health harms of pornography, we shouldn't have mainstream corporations providing infrastructure to the pornography industry," Hawkins concluded.

Other companies on this year's list include Massage Envy, America's largest massage chain, accused by hundreds of women of not taking adequate measures to prevent some of its massage therapists from sexually assaulting or harassing customers.

NCOSE also targeted Seeking Arrangement, a dating website with more than 20 million members. It pushes college students weighed down by student debt to pair up with well-off older men. NCOSE says this teaming up of "sugar babies" with "sugar daddies" – labeled "sugar dating" -- is "a system of thinly veiled prostitution."

"We believe that no student should have to barter sexual access in exchange for an education," McNamara said.

The popular gaming platform Steam made the list for its more than 3,900 sexually exploitative games. The site has more than 90 million active users, some 35 million of them being minors.

With more than 150 million users worldwide, Netflix made the list because, as NCOSE put it in a statement, "Netflix often produces media portraying gratuitous nudity, graphic sexual acts, and even graphic depictions of sexual assault."

Rounding out the list are Tik Tok and the shopping website and app Wish, both with half a billion users.  NCOSE blasted Tik Tok for facilitating "a space for sexual grooming by abusers and sex traffickers," and Wish for its sale of "child-like sex dolls, spycams marketed for filming women nude without their permission, and misogynistic apparel featuring female nudity that minimizes women as two-dimension sex objects."