The Christians Doing Battle in the NFC Championship Game 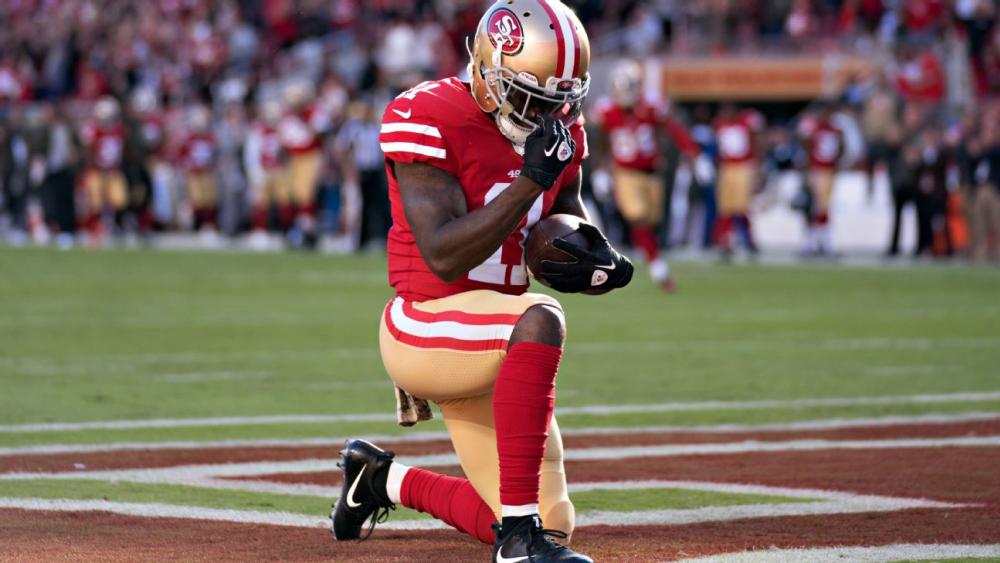 As the San Francisco 49ers and Green Bay Packers took the field Sunday with a trip to the Super Bowl on the line, it was a chance for some of the players to put their faith on display.

The mainstream media doesn’t usually report on the faith of various players, but thankfully, we do! Just like the faith-filled Eagles talked openly about Jesus during their remarkable trip to the Super Bowl, we’re praying many of these players get the chance to do the same.

On the 49ers, backup QB CJ Beathard has perhaps the most gut-wrenching story. His 22-year-old brother Clayton was stabbed to death this past December the same day San Francisco was set to play the L.A. Rams.

Coach Kyle Shanahan addressed the team after they ended up winning the game, revealing for the first time that the last thing CJ said to him before the game was “go win that game” and sure enough, they did.

For the Beathard family pic.twitter.com/Td26FyOEND

According to Sports Spectrum, Beathard’s faith routine is consistent:

Back when Beathard was quarterbacking Iowa to a 12-2 record in 2015, he struck up a friendship with a 14-year-old Hawkeye fan named Jay Knabe who traveled with his parents and lived in an RV. After meeting at Iowa’s spring game, the two reconnected and Beathard asked Knabe to send him a verse of the Bible before every game that season.

“I read Bible scriptures in the hotel before we get on the bus,” Beathard told hawkcentral.com in 2015. “And there’s a book called ‘Jesus Daily’ that I read a page from before each game.”

Beathard reached the NFL as a third-round pick of the 49ers in 2017, where his faith was again on display. When the quarterback ahead of him on the depth chart, Jimmy Garoppolo, tore his ACL in 2018, Beathard was nothing but supportive.

“I told him I would be praying for him and that I love him,” he said.

Marquise Goodwin made headlines when he suffered the tragic loss of their premature son just hours before a game, but he and his wife remained strong in their faith, leaning on God in the difficult trial.

This whole week has taken an emotional toll on my husband and I, Struggling to keep our healthy baby safe in my womb. However, God had other plans for us. Today, I had to deliver my precious baby boy early this morning due to preterm labor. Despite our loss, my hubby kept grinding, scored his son a touchdown & got our first “W” of the season. He had a wonderful game today. I️ appreciate everyone who kept us in their prayers and constantly checked in on us. This was truly and an amazing experience and it was also a tragic experience. But that’s okay because we won’t stop fighting and we won’t give up on what God has in store for us. It’s just important for us to remember that things happen for a reason, even though we may question ourselves “why us.” Our faith is strong. I just ask that you let us mourn in peace and ask that you not try and call/blow our phone up. #RIPBabyGoodwin #PretermLabor #PregnancyLoss #StayingStrong

The couple also lost unborn twins the following year. A difficult time for anyone, and it’s certainly incredible to see someone’s faith tested and remain strong through it all.

Former Eagles WR Jordan Matthews hasn’t seen a ton of field time this year, but he’s also built his foundation on Christ and isn’t phased by living life on the roster bubble. The SF Chronicle has the answer:

During a recent 40-minute interview, Matthews, 27, discussed his faith and how it has helped him navigate his humbling career nosedive. He became a Christian in 2015, his second season with the Eagles, largely because he was inspired by the example of two teammates, tight end Trey Burton and safety Chris Maragos.

Matthews observed how each player, both fierce competitors, maintained joy during a turbulent 7-9 season in which head coach Chip Kelly was fired. Matthews, whose happiness and self-worth were determined by his on-field performance, wanted what they possessed.

“The common denominator is both of them were Christians and had a hope that transcended this lifetime,” Matthews said. “And it was real. I could feel it every time I was around them.”

Matthews says his faith explains how a bad practice doesn’t devastate him, even while he’s on the 49ers’ roster bubble.

On the other side of the field, star QB Aaron Rodgers grew up in a Christian family, although he recently raised some eyebrows when speaking about his close relationship with Rob Bell.

Rodgers, while saying he’s abandoned what he was taught growing up and has famously had a falling out with his family, hasn’t specified his beliefs but says he no longer identifies with any particular “organization.”

Star running back Aaron Jones is the model teammate and while he hasn’t spoken at length about his faith, one profile on his family indicates his parents taught him faith growing up. “His parents told him he had everything he needed – talent in his body, air in his lungs and God in his heart. Those ideals stay with him in both victory and defeat,” according to Packers.com.

He’s praised God for allowing his parents to make it to the games. “Honestly, I just thank God to allow my parents to be in a position to make it to all the games. Everywhere I go feels like home because I have them there,” he told Packers.com recently.

Punter JK Scott has been pretty open about his testimony and faith in the Lord. He expanded on his background and personal story in this wide-ranging interview:

“We should be overflowing with thankfulness with what Jesus has done for us,” Scott said during the interview, which showed quite a depth of knowledge about the faith and a clear desire on Scott’s part to seek and follow the Lord.

We’ll be on the lookout for any other players on either team making bold faith statements with the platform they’ve been given.