'Competing to Represent a Country She Despises': Olympian Gwen Berry Under Fire for Snubbing US Anthem 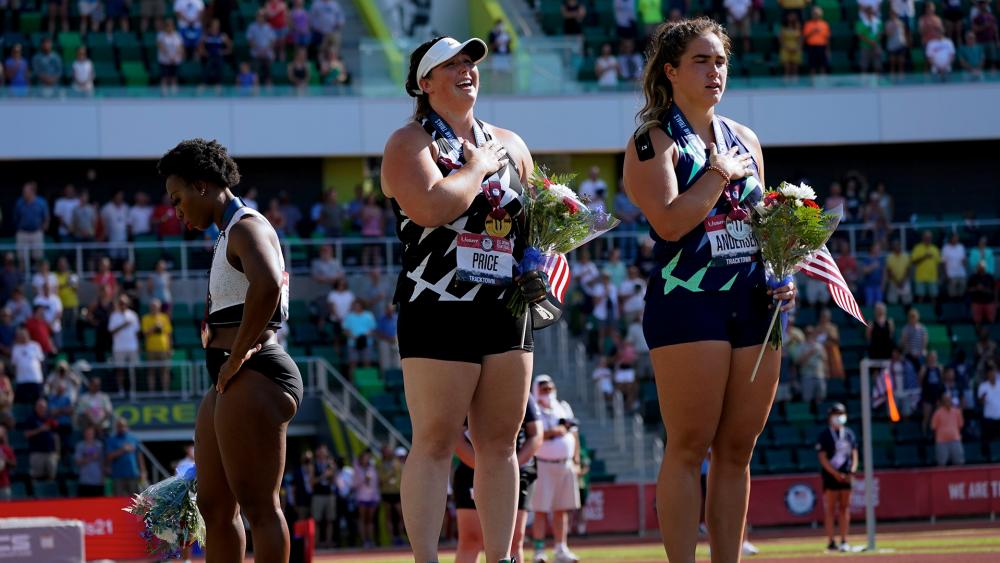 Gwendolyn Berry, left, looks away as DeAnna Price and Brooke Andersen stand for the national anthem after the finals of the women's hammer throw at the U.S. Olympic Track and Field Trials Saturday, June 26, 2021, in Eugene, Ore. (AP Photo/Charlie Riedel)

Last week, they played the national anthem one time a night at the U.S. Olympic track and field trials.

On Saturday, the song happened to start while outspoken activist Gwen Berry, was standing on the podium after receiving her bronze medal in the hammer throw.

While the music played, Berry placed her left hand on her hip and shuffled her feet. She took a quarter turn, so she was facing the stands, not the flag. Toward the end, she plucked up her black T-shirt with the words "Activist Athlete" emblazoned on the front and draped it over her head.

Berry's other two teammates, gold and silver medalists DeAnna Price and Brooke Anderson faced the flag, placing their right hands over their hearts.

"They had enough opportunities to play the national anthem before we got up there," she said, according to The New York Post.

Berry, who qualified to be a part of the U.S. Olympic team for the second time, called out event organizers for being inconsiderate to her, despite her questionable behavior while her nation's anthem – the country she will represent next month in Tokyo, Japan in front of the entire world – was played.

"It was real disrespectful," she said.

'"I didn't really want to be up there," Berry said. "Like I said, it was a setup. I was hot, I was ready to take my pictures and get into some shade."

"They said they were going to play it before we walked out, then they played it when we were out there," she said, according to the Post. "But I don't really want to talk about the anthem because that's not important. The anthem doesn't speak for me. It never has."

A USA Track and Field spokeswoman disagreed with Berry's claim that it was just set up to embarrass her.

"The national anthem was scheduled to play at 5:20 p.m. today. We didn't wait until the athletes were on the podium for the hammer throw awards," said Susan Hazzard. "The national anthem is played every day according to a previously published schedule."

Berry's gestures drew virtually no reaction from the still-filling stands, but two years ago, she was sanctioned by the U.S. Olympic and Paralympic Committee for raising her fist on the podium after winning at the Pan-Am Games. This time around, U.S. officials have said they will not punish athletes who raise fists or kneel at the trials or in Tokyo.

However, the International Olympic Committee has said it will enforce its Rule 50 that bans demonstrations inside the lines. It's the same prohibition that got sprinters Tommie Smith and John Carlos sent home from the Mexico City Games in 1968.

Berry's antics didn't sit too well with many Americans who expressed their anger on social media.

"We're going to see more of this. It's going to make patriotic Americans cheer for foreign competitors and against the anti-American Americans," author Dinesh D'Souza tweeted.

One user replied, "It's going to affect networks covering these events and people deciding to not watch them, that will then affect advertising $$. People have turned off NBA and NFL for all their activism."

Another Twitter user commented, "GWEN should NOT be competing to represent a country she despises. Perhaps she'd be more comfortable somewhere else."

One user tweeted, "When you're not that good.. but you want all the attention."

When you're not that good.. but you want all the attention https://t.co/OKdC7buagI

"She should be removed from the team. The entire point of the Olympic team is to represent the United States of America," Crenshaw said. "That's the entire point. So, it's one thing when these NBA players do it, OK. Fine. We'll just stop watching. But now, the Olympic team? It's multiple cases of this. They should be removed. That should be the bare minimum requirement is that you believe in the country you're representing."

Dan Crenshaw calls for Gwen Berry to be removed from the Olympic team because she turned away from the flag pic.twitter.com/c2xWKLXPPJ