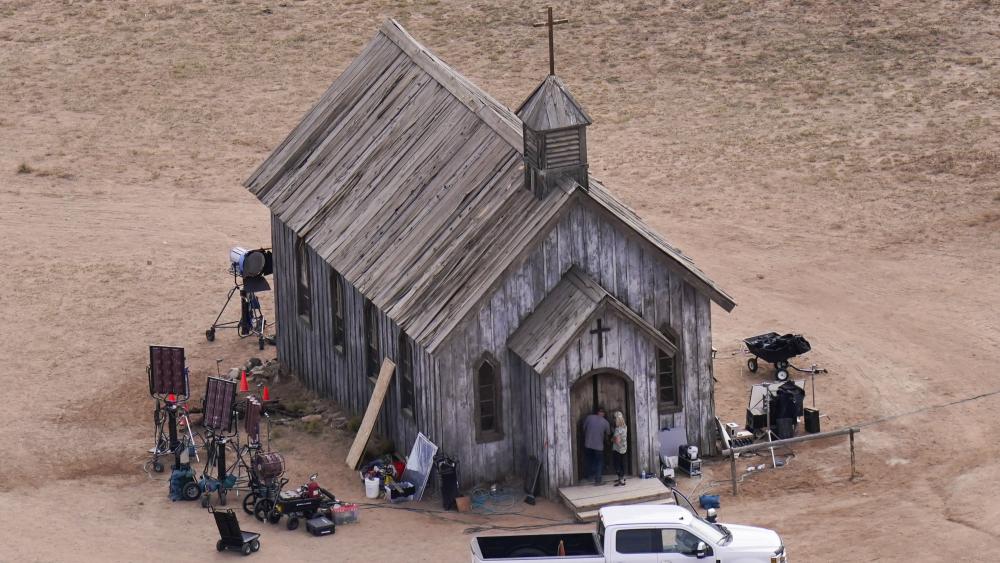 This aerial photo shows a film set at the Bonanza Creek Ranch in Santa Fe, N.M., Saturday, Oct. 23, 2021. Actor Alec Baldwin fired a prop gun on the set of a Western being filmed at the ranch on Thursday, Oct. 21. (AP Photo/Jae C. Hong)

Hollywood star Alec Baldwin says his “heart is broken” after he tragically discharged a “prop gun” that fatally injured cinematographer Halyna Hutchins while on the set of his forthcoming Western-style film.

Baldwin, 63, shot and killed Hutchins and wounded director Joel Souza — who is in critical condition — while filming for “Rust.” According to reports, the actor accidentally fired at the two crew members with a “prop gun” from the movie.

“There are no words to convey my shock and sadness regarding the tragic accident that took the life of Halyna Hutchins, a wife, mother, and deeply admired colleague of ours,” said Baldwin. “I’m fully cooperating with the police investigation to address how this tragedy occurred and I am in touch with her husband, offering my support to him and his family.”

“My heart is broken for her husband, their son, and all who knew and loved Halyna,” he added.

The incident occurred at Bonanza Creek Ranch in Santa Fe, New Mexico, where they were filming scenes for “Rust.”

A spokesperson for the Santa Fe Sheriff’s Office, Juan Rios, said the law enforcement agency is “treating this as we would any other investigation,” noting deputies are still working to determine if what happened was an accident, according to the Santa Fe New Mexican.

The outlet reported seeing a very distraught Baldwin in tears on the phone outside the sheriff’s office late Thursday evening. Starring in the film as well as serving as one of its producers, Baldwin willingly went to the sheriff’s office and provided a statement to deputies.

In her final Instagram post, Hutchins noted the “perks” of filming a Western is getting to ride horses:

Rust Movie Productions said production for the film “has been halted for the time being,” adding that “the safety of our cast and crew remains our top priority.”

Fran Drescher, president of the Screen Actors Guild-American Federation of Television and Radio Arts, and the union’s National Executive Director Duncan Crabtree-Ireland issued a joint statement saying they are “devastated by this tragic news.”

“Our hearts go out to the family of Director of Photography Halyna Hutchins, who passed away, and to Director Joel Souza, who is injured and hospitalized,” they said. “This is still an active investigation and we do not yet have all the facts. We will continue to work with production, the other unions, and the authorities to investigate this incident and to understand how to prevent such a thing from happening again.”

Hutchins, for her part, was born in Ukraine and grew up on a Soviet military base in the Arctic Circle. Her other film credits include “Archenemy,” “Blindfire,” and “Darlin’.”