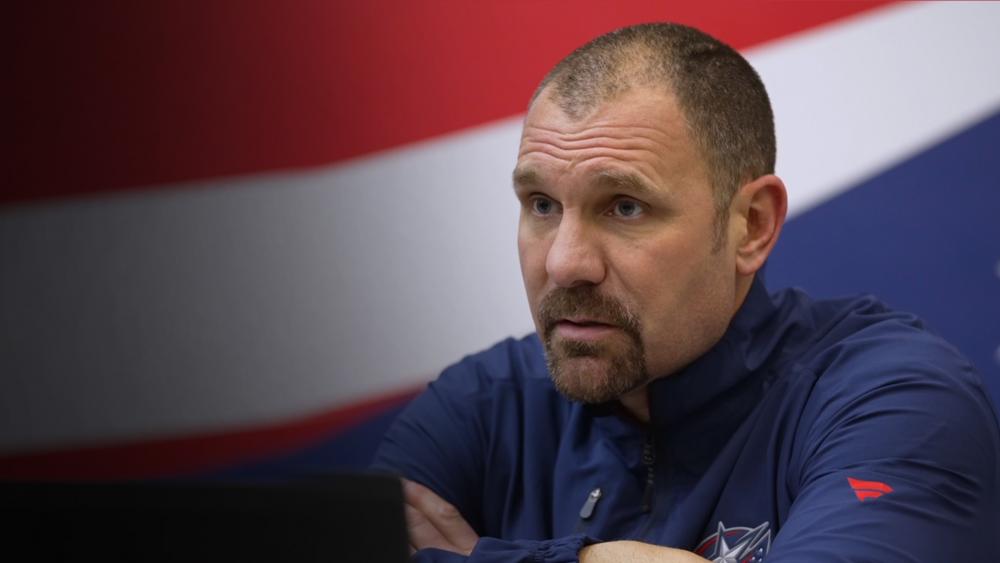 The Columbus Blue Jackets' Brad Larsen is one of just 32 National Hockey League head coaches in the world, and while he's an "ultra-competitor," his life is grounded on faith in Christ.

He treasures a scripture that resonates with him, reciting it as, "'Haven't I commanded you be strong and courageous, do not be discouraged or dismayed for the Lord your God is with you wherever you go.'"

The former player, assistant coach and two-time cancer survivor has exemplified a rare, transparent blueprint of depth for the Blue Jackets. Brad inspires contagious strength from his own personal transformation.

Coach Brad Larsen: "Yeah! To me, it represents being bold and you have nothing to fear. Good, bad, everything in between. He's with you. Always! As I've started those coaching moments and you get higher up, is it stressful? It's not! Not because I'm doing it perfect but it gives me perspective on why I'm doing it and who am doing it for."

Question: "Brad, how did scripture move from simply reading it to where it's embedded into who you are?"

Larsen: "Morning time is my time. We get in, I bring my dog to work with me and she curls up on the coach and I have my quiet time with the coffee and that kind of sets my day, to do a job that I'm deeply passionate about! I do believe God has placed me here for a reason. It's a lot of hours. My time with my family is very important, my wife needs a husband, my kids need a father. And so, in quietness and by yourself is when I connect the greatest. It's got to be priority and getting into the Word and just reading the scripture, that's real important to me."

John Davidson is the Blue Jackets Vice President of Hockey Operations who affirms his head coach with this: "His way of treating the world is the right way! He is strong-willed, he's motley honest. Players love honesty! And then he has a great deal of compassion to go with it! And Brad's always there for everybody. He's an amazing guy that way!"

Question: "Blue Jackets hockey, what is their identity?"

Coach Brad Larsen: "When I got interviewed for the job, the three words that were put on my heart were love, care, and trust. I was told by a good friend that, 'you're probably the only one doing that.' But that's what I believe in. You're gonna hear a lot of words of integrity, and humility and not words maybe you hear a lot. There's so many layers to humility, about being selfless and team first attitude and just in life in general. On the hockey side of it, I want us to be a very relentless competitive team, hard to play against, tenacious. But I want them to do that because they've embraced each other. You've got to care about them, and they got to see it and feel it. And then that builds trust. Patience is required. It takes time."

Question: "What is it about creating a team culture that is most necessary?"

Larsen: "Humility, again, is a word that keeps coming back. Humility means it's not about you. And in this world now, in this culture now, it's really hard to take the focus off yourself. You have the social media and it's instant kind of feedback all the time. I share this with my players a lot; it's, 'Whose opinion matters?' You got to be really careful about that! Who's feeding you? And there's a lot getting thrown at them. Individual results, I need them because guys bring certain skill sets, but it's always about the team!"

Question: "Whose opinion matters most to you?"

Larsen: "May 22nd, 2011, I gave myself to the Lord! It changes your life and for 30-plus years in my life I had zero faith and I didn't know who that God was and what that looked like. So, you build your whole life of this, almost a facade of who you are or what you want to represent. And I'm not that man, you know, I don't want to be that man anymore. So, change is required. To change you have to change."

Question: "You viewed this game for a long time as a fan, as an assistant coach, as a player. But now you're the head coach. How does that view look different?"

Larsen: "Once you become the head coach, you're worried about everybody. It's a huge responsibility and one that I never take lightly. I love it! I love just trying to help people and not just in the game, but away from the rink. And I'm ultra-competitive and I want to win every game and I understand the business I'm in. It's wins and losses and that's how we're judged. Embrace the struggle and go, okay. I come back to John 3:30 where He must become greater and greater and I must become less and less. I'll get out of His way and see where He wants to take it."

Question: "You self-acknowledged as an ultra-competitor. Jesus Christ, is He a competitor?"

Larsen: "He's like the ultimate warrior. When I understand what Jesus gave up, what He went through, there's nobody tougher than Jesus. At any time, He could have brought in the cavalry and made it go away. But He didn't. It is incredible. When you think about the purpose that Jesus came and did it for. I mean when you see that kind of love and grace, that grabs your attention!"

Question: "You're a two-time cancer survivor over a span of three years. What did that fight draw out of you?"

Larsen: "I wasn't a believer then. I had an athlete's mentality at that point when I found out I was stage 2, almost stage 3 melanoma, you know, we were very fortunate. And then a year and a half later I had testicular cancer going into the playoffs and it was on my daughter's first birthday, having surgery and went through radiation. We caught it early. It wasn't that I was thinking about dying, it was 'why am I here' and to understand, it's not about you!"

Question: "You reached a place – urgency, desperation, great vulnerability. How did you confront uncertainty?"

Larsen: "Well, confronting is – it came down to surrendering it. I can say this with total conviction that I don't live in fear. I don't coach in fear. It's Proverbs 16:9, it says, 'I can make my plans, but God determines the steps,' right? When you start to embrace it and understand that our time here is short, and then go back to what I was talking about...purpose. Yeah, I want to win Stanley Cup, but I think there's a much bigger responsibility to try and impact people in a positive way."