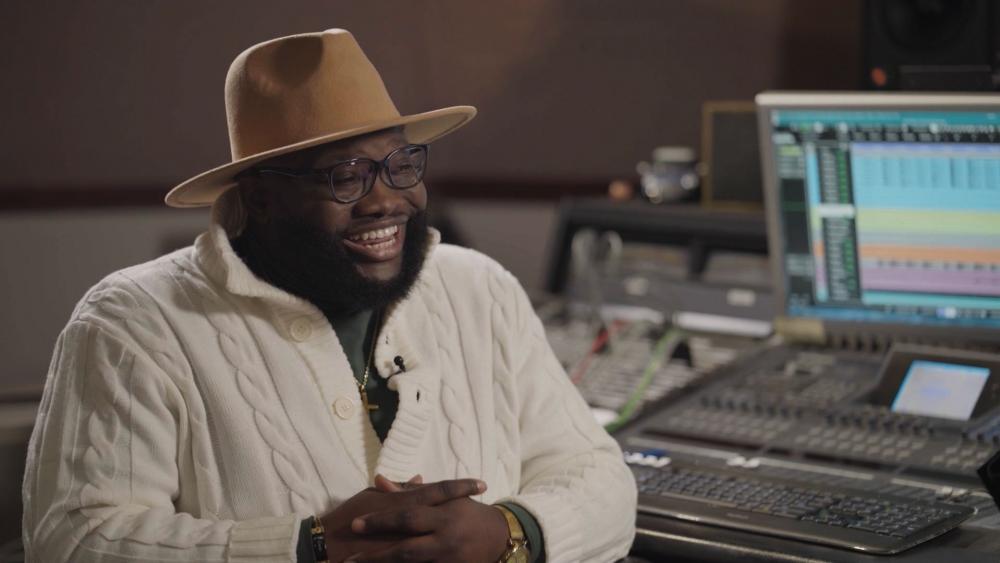 Award-winning singer and songwriter Titus Showers began his music career as the lead singer of his family's music group, The Showers. But he's enjoyed a solo career since 2018, and despite his busy schedule, he makes time for family traditions, especially during this season. Christmas is all about family for Titus, his nine siblings and their parents.

"Wow. You really need a TV camera to capture the tree. We have a 10-foot tree at Mom's. We go to our house for Christmas Eve. It's just a big blessing. The trees that are real high with gifts all through the hallway. Wonderful fellowship, wonderful eating. And man it's a time. It's a sight to see," he continued.

"The tradition is to make sure we are at mom's house for Christmas Eve. That's the big tradition. And we know, we are singing, carols. She's trying to implement some karaoke, some new things. So, trying to implement that. We want to start on time because on Christmas Day, we have a one-hour Christmas service that starts at 9:00," he told CBN News.

"And we are free to go mingle with our families, with our other friends and all of that stuff. So that's why you want to order at a specific time at 6:00 and we'll be there all night. We are there all night," Titus continued.

"We are always trying to get him to slow down. And so, his motto is, 'I would rather wear out than to rust out.' So, he wants to keep going. He never wants to stop. He wants to preach his heart until the Lord says, 'My son, that's enough,'" Titus said.

"My main man, he's so strategic in his planning man. He spends time on Tuesdays mostly when he gets his sermon prepared for the following Sunday, for the sermon Sunday that's coming up. He spends a whole lot of time in the study which we put on the other side of the house, you know, away from all the noise, the grandkids, and everything in their game room," he told CBN News.

"So, a witness, we can have total isolation, total concentration. And God is just blessing him. His preparation is just amazing. Everything seems to be new. Each time he speaks, he'll pull, and it kicks in. I was like, he found this. This is what the Lord said here. Wow. And that comes from preparation and dedication and hard work with our Lord and Savior Jesus Christ, and making sure he feeds his flock what the Lord has given him," he continued.

His father's ministry gift in evident in all 10 of his children.

"Big brother is a pastor, by which I was junior, and we all definitely are tied into the word of God, you know. But there's only two ministries in the family and I minister too so, you know, I put those scriptures out, and I pull from his texts when he preaches. I will study that," he said.

"I write songs, from his sermons, a song that's on my new album entitled 'You're Way Out, Way Up There' from my dad's motto, which is 'Do what you supposed to do and not what you want to do,' because many times we do what we want to do and blame everything on the devil. That's not what it is; you brought that upon yourself. So, we need to own His understanding, no matter how old, then we'll be so much better off," he continued.

He told CBN News what he did to give birth to the new single "Holy."

"I was writing on the album, me and my producer, Mr. Zulu's and Mr. Lucius Hoskins. We came up with those lyrics over Zoom and we wanted a chant that can bless the people of God, even if you don't have any music there, you know? I flew out to Houston on Thursday, and we were able to record that record and share with the people of God on my new album," he said.

He describes his process as a solo artist.

"It's been a blessing, man. It started off slowly because I miss my family. You know, I'm number five, in the middle and just having a family on the road with you, you can't beat that. And then I was traveling by myself. Now, the Lord has blessed me to have all managers and then have friends and brothers in different states that would take care of me and accommodate my wishes," Titus continued.

"It's definitely been a dream come true to go into places, even in the airport, in stores, and hear my music. The people of God and people know who Titus is, you know, what a blessing from God. Just that transition from a family to solo act man and it's a blessing. They are my biggest supporters, so I must throw that out," he told CBN News.

"We are just definitely on this journey and seeing what the Lord has in store for us in the near future."