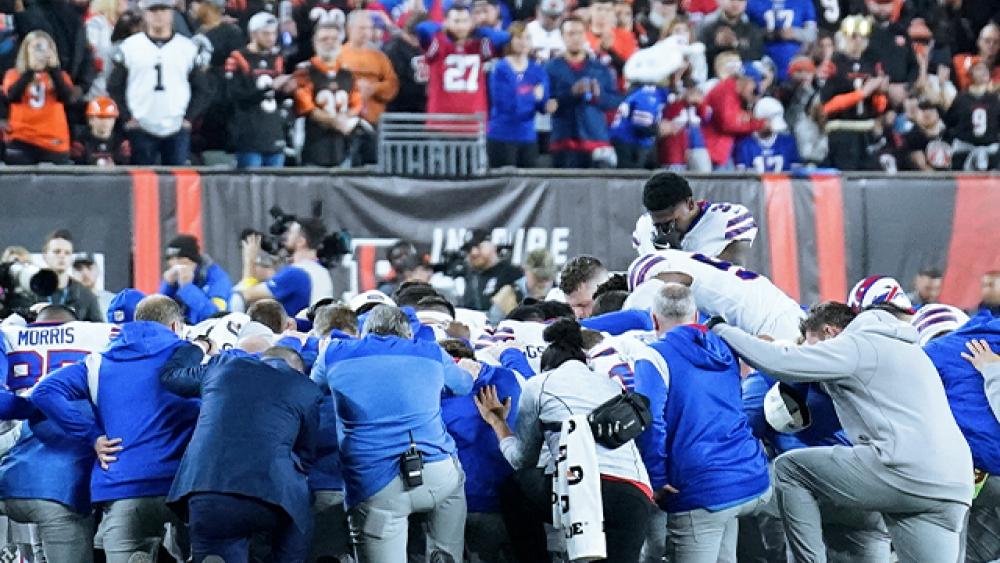 ABOVE: Former NFL player Benjamin Watson appeared on the Tuesday edition of CBN News' Faith Nation to talk about Damar Hamlin's medical emergency in Monday's game and the power of prayer.

A "terrifying" scenario played out on live television during Monday night football. Buffalo Bills defensive back Damar Hamlin collapsed after making a tackle during the high-profile game against the Cincinnati Bengals.

The 24-year-old appeared to have been hit in the chest by the helmet of Bengals wide receiver Tee Higgins during the tackle. He initially jumped back up, but after taking two steps, he collapsed.

According to an overnight statement from the Bills, Hamlin went into cardiac arrest, but CPR performed on the field was able to restart his heart. He is now sedated and in critical condition. His doctors say the next 12-24 hours are critical, so as his team, fans, and other supporters wait for more news, they're praying.

Players on the field dropped to their knees in a prayer circle as the ambulance carrying Hamlin drove off the field, and then another prayer circle of fans formed outside of the University of Cincinnati Medical Center where he was taken.

And Tee Higgins also tweeted out a message of prayerful support:

My prayers and thoughts go out to @HamlinIsland the Hamlin Family. I’m praying that you pull through bro. Love

The Bills posted this montage of more prayer flooding in online.

Fans have also been donating to causes Hamlin cares about as they wait to hear more about his condition. He recently posted to raise money for a toy drive. That site had a $2,500 goal – overnight they quickly surpassed $3 million.

Doctors say a key factor in Hamlin's recovery will be the length of time he was on the field with no cardiac activity.

A quote from Hamlin himself during his college football days at the University of Pittsburgh is now ringing true for this situation as well. He said, "My faith is in God. So whatever He has planned for me, that'll be it."

Here's more of the prayer reaction on social media:

Father, I come right now and lift up Damar Hamlin. We bring Damar under your authority and covering. We ask for continued healing over them. Full and complete healing in Jesus name over Damar.

“Sending our thoughts and prayers to Damar” — Cincinnati Bengals on Twitter.

“Damar Hamlin is the best of us. We love you, 3. Praying for you.” — University of Pittsburgh, where Hamlin played his college ball.

“This is about Damar Hamlin and His Health. I must say this though another aspect of why this game should be postponed is because of the type of focus it takes to play a professional football game is as intense as it gets and I truly don’t believe these men can get that back. IMO.” — Former NFL player and current ESPN analyst Marcus Spears on Twitter.

“Offering up prayers and strength for Damar Hamlin of the @BuffaloBills. The game should be postponed immediately.” — former tennis star Billie Jean King on Twitter.

“Prayers up for Damar Hamlin and his family. This game should’ve been called, nobody is concerned about football right now." — Arizona Cardinals quarterback Kyler Murray on Twitter.

“I’m asking all New Yorkers to join me in praying for Damar Hamlin, his family, his teammates, and our brothers and sisters in Buffalo.” — New York City Mayor Eric Adams on Twitter.

"Sending our prayers to Damar Hamlin and his family. We are all Buffalo Bills fans tonight." — New Jersey Governor Phil Murphy on Twitter.

“I wanna send a prayer to Damar and his family.” — Bengals wide receiver Ja'Marr Chase on Twitter.

League Decides Game Will Not Be Played This Week

The NFL informed the Buffalo Bills and Cincinnati Bengals Tuesday that their game, suspended Monday night, would not be resumed this week while the Week 18 schedule remained unchanged, for now.

No decision regarding the possible resumption of the pivotal Bills-Bengals game has been made.