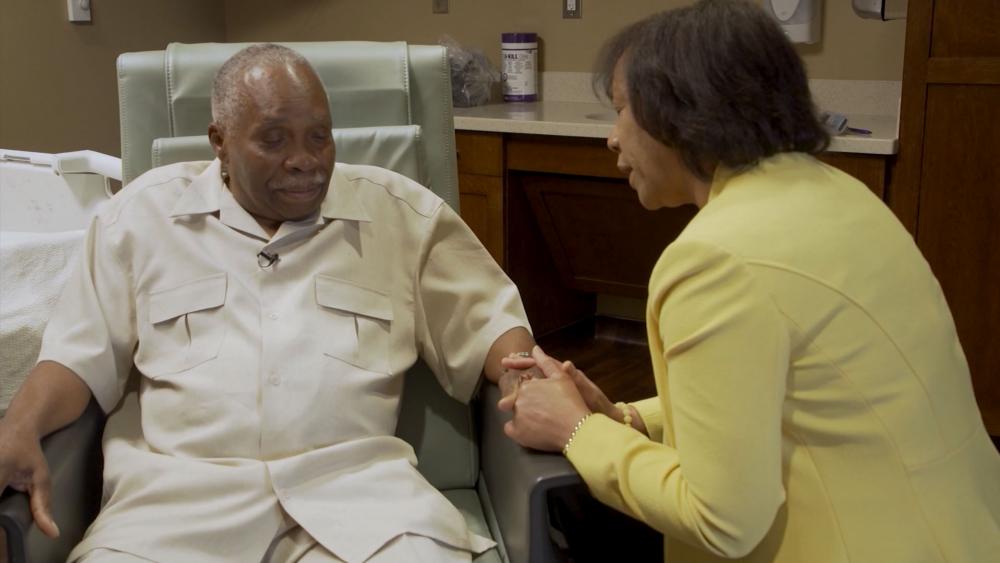 Four out of ten American adults will be diagnosed with some form of cancer in their lifetime. Right now, over 15 million people in the U.S. are living with cancer. Every year an estimated 1.7 million more people receive a cancer diagnosis. In a church congregation of 200 people, approximately eight members are living with cancer and two more will be diagnosed with the disease every year.

The enormous number of cancer patients points to a great spiritual need. Even people of faith can falter while they're dealing with cancer.

David Strachan loves the Lord but told CBN News he recalls intense feelings of desperation at the lowest point of his cancer journey.

"The pain was so bad I could hardly bear it, and I decided I can't live like this. I'd rather die," he said, adding "Sometimes the pain and the sickness and the suffering that you go through can weaken your faith."

However, when cancer minister Reverend LaWanda Long walked with Strachan, his faith strengthened. "I learned that God can do anything, and never give up on God," he said, "If you go to the cliff, don't jump off. God's amazing. He will help you. You just need to someone to tell you that God is able to save you from jumping off the cliff."

What It's Like to be a Cancer Hospital Chaplain

Reverend Long is a chaplain at Atlanta's Cancer Treatment Centers of America, a hospital where every patient is dealing with cancer.

"I want them to be to really receive what Christ told us. He said, 'Peace I'm giving unto you,'" Rev. Long told CBN News. "That sense of peace is a sense of wholeness and wellness, and I think that's beyond just being healed of cancer."

Long walks from room to room, prepared to deal with almost anything.

"If they're angry at God and they lash out at me, I take that. Because I know it's not me personally. But to make us grow closer to God, sometimes we have to vent, we have to say, 'I'm upset. I'm m angry.' That's what David did in some of his lament psalms."

Rev. Long ministered to Jean Bates, who was hospitalized for an aggressive form of uterine cancer which she said turned out to be a blessing.

"God will walk you through and will be with you, in the good times and the bad times," Bates said, "The Lord doesn't promise that bad things won't happen, but that He will always be present. And I've never felt God's presence anymore."

Sometimes Rev. Long helps people who already know Jesus grow closer to Him. Other times, she makes the introduction.

Years ago a patient told the chaplain she received better care here than at her home church...which made the chaplain realize...churches need to learn how to specifically minister to cancer patients."

Our Journey of Hope

Long is one of a number of CTCA chaplains at their hospitals in Atlanta, Philadelphia, Phoenix, Chicago and Tulsa. Years ago, a patient told chaplain who was visiting her, she received better pastoral care from hospital chaplains than she from her home church.

That made the chaplain realize churches need to learn how to specifically minister to cancer patients.

That revelation led to "Our Journey of Hope," a successful program raising up cancer ministries in local churches.

CTCA regularly holds seminars consisting of two leaders from each participating church teaching them how to meet the needs of cancer patients.

"The great thing about this training is it is totally free," said Rev. Gordon, "And then they go back and train others to become cancer care ministers."

Rev. Gordon said in addition to serving church members, cancer ministries are also a great way to touch the lives of people who don't attend. "It's not just within the four walls of the church, he said, "It's reaching out to maybe unchurched people who people in the congregation know, and they have cancer, maybe a neighbor or a co-worker. And this church can come alongside them and minister to them, hopefully not just meeting their practical needs, but leading them to Jesus."

Reverend Long says among other things, cancer ministers learn what to say and what not to say to people who have been diagnosed with cancer.