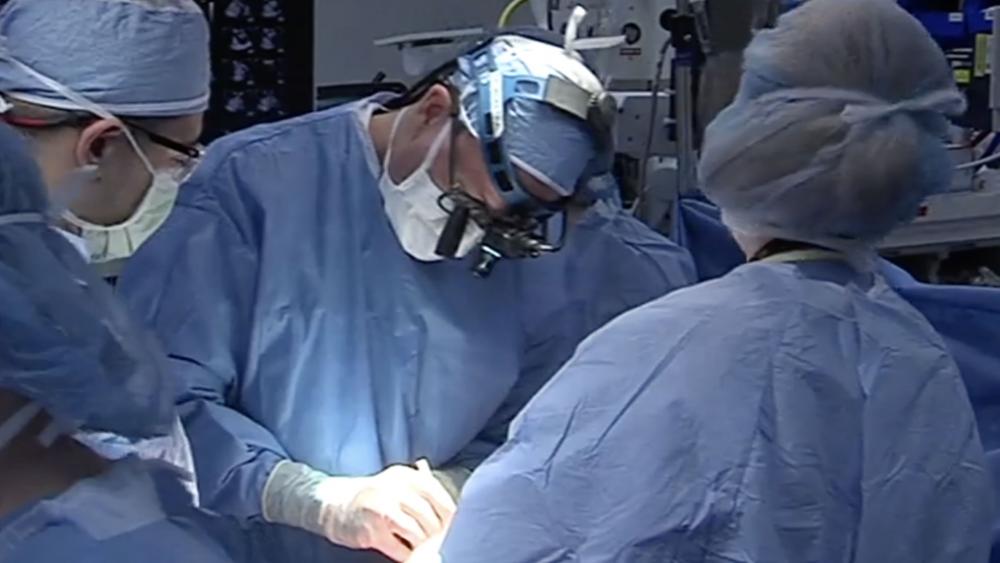 As the debate over abortion and personhood rages on, surgeons at the Cleveland Clinic in Ohio earlier this year performed their first-ever in utero fetal surgery on a nearly 23-week-old unborn baby.

The February procedure, according to a press release posted this week by the medical center, was to repair a spina bifida birth defect.

The baby girl was successfully delivered by caesarean section on June 3. Both the mother and the infant are doing well.

The medical team, led by Dr. Darrell Cass, director of Fetal Surgery in Cleveland Clinic’s Fetal Center and a specialist who has performed more than 160 fetal surgeries since 2002, are the first to perform such a procedure in northern Ohio.

Spina bifida, which impacts a person’s ability to walk and run as well as his or her ability to go to the bathroom, is typically detected as early as 18 weeks into pregnancy, according to the clinic.

Here’s how the surgery to repair the defect is performed:

During the fetal repair surgery, a caesarean section-like incision is made and the mother’s uterus is exposed. An ultrasound is then used to locate the placenta and fetus. The uterus is opened 4.5 cm and the back of the fetus is exposed, showing the spina bifida lesion. The surgeons then carefully suture several individual layers of tissue (myofascia, dura and skin) in order to cover the defect. After the uterus is closed back up, the fetus remains in the womb for the remainder of the pregnancy and is ultimately born by caesarean section.

“By successfully repairing the defect before birth, we’re allowing this child to have the best possible outcome and significantly improve her quality of life,” Cass explained. “There are different measures of quality in determining success for fetal repairs and in this particular case, all metrics for maximum quality were achieved.”

The surgeon was careful to note that, although the surgery was very successful, spina bifida is incurable. So the patient “will require ongoing supportive care.”

FAITHWIRE  Pop Icon Madonna Asks: ‘Don’t You Think Jesus Would Agree That a Woman Has the Right to Choose What to Do With Her Body?’

Cass joined the Cleveland Clinic in October 2017 to build out the medical center’s fetal surgery unit. He established a similar fetal center in Houston nearly two decades ago.

“Families in this region now have more options when it comes to making these types of decisions and we are thrilled to be able to provide the care needed for these complex cases,” he said of the Cleveland Clinic’s Fetal Center.

Not long after the press release was issued by the Cleveland Clinic, pro-life advocates and organizations quickly applauded Cass and his colleagues for their impressive work.

Not long after the press release was issued by the Cleveland Clinic, pro-life advocates and organizations quickly applauded Cass and his colleagues for their impressive work.

Wow! This is what's possible when science & technology are used to enhance life, rather than end it. https://t.co/DC95HQnPkC

Also, another blow to the "party of science." https://t.co/olu5i0COAj

If preborn children are patients, they are also people deserving of our nation's protection. https://t.co/Dm4Jq2wP8l

With each new advancement in science, the pro-abortion position becomes more irrelevant https://t.co/AxVyFZZezG

They pointed to the incredible surgery as proof positive women are, in fact, carrying human lives — not just clusters of cells — in their wombs.

The Cleveland Clinic’s surgical feat comes as pro-abortion celebrities and politicians rebuke states like Georgia and Alabama for passing stringent pro-life laws. Some Hollywood elites, led by actor and activist Alyssa Milano, are threatening to stop working in Georgia, known as the “Hollywood of the South,” unless the bill, which bans abortion after six weeks, is overturned.