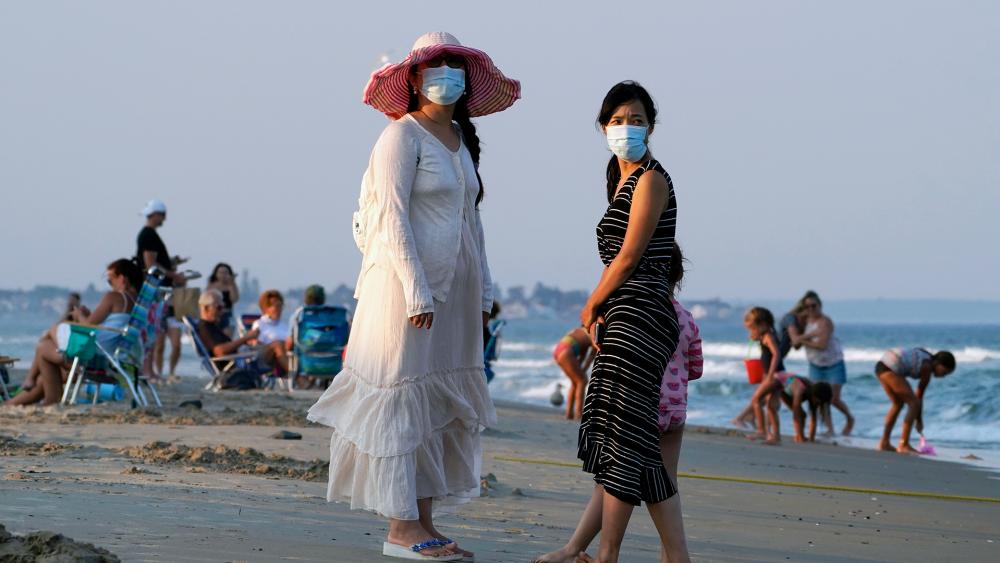 At least 36 states and the District of Columbia now have laws about wearing masks in public.

Now presumptive Democratic Presidential Candidate Joe Biden is urging all state governors to mandate mask-wearing. "Every single American should be wearing a mask when they're outside for the next three months, at a minimum," Biden said. "Every Governor should mandate mandatory mask-wearing."

Even Google Assistant on Android phones is telling users to wear masks with a musical number that begins, "When in public, wear a mask. Just a teeny, weeny task..."

The Wisconsin Department of Natural Resources has ordered employees to wear masks even on video calls from home, to set a "safety example" and to show they care about others.

President Donald Trump pushed back on Biden's proposal telling him to "stop playing politics with the virus" adding the mask decision is up to the governors. "Biden's approach is regressive, anti-scientific," Trump said.

In Florida, Marion County Sheriff Billy Woods says his deputies won't be allowed to wear face masks except under certain conditions, and neither will visitors to the sheriff's office.

And in Marion County's largest city, Ocala, Mayor Kent Guinn vetoed a new city ordinance making mask-wearing mandatory.  "I just think we should leave it to the people and if they would wear a mask, wear a mask. You don't want to wear one, don't wear one, have respect for each other," Guinn said.

The city council then voted to override his veto. City Council member Matthew Wardell  said, "It makes it really that much harder when elected officials like the sheriff or the mayor or others put conspiracy theories into the middle of all that."

Both the CDC and the World Health Organization now recommend masks after earlier recommending NOT wearing masks.

The CDC also did not recommend masks in most situations during the 2009 Swine Flu epidemic, which saw 12 times as many cases in the US, and almost twice the number of deaths of COVID-19.

But for those who want or need to wear a mask, a test by researchers at Duke University found that the fitted N-95 mask, the surgical mask and poly cotton masks did best.

The director of the CDC, Robert Redfield, is warning the virus won't be contained if people refuse to wear masks. "I'm not asking some of America to do it, we all have to do it," Redfield said.

Experts still admit they don't know for sure whether those tiny droplets from the nose and mouth actually increase the chance of transmitting coronavirus.

Meanwhile, the COVID Tracking Project shows hospitalizations have been on a very steady decline for more than two weeks straight, dropping by 19% since July 27.