Congressional Gold Medal: A-L-S Hero Types with His Eyes While Getting Highest Honor 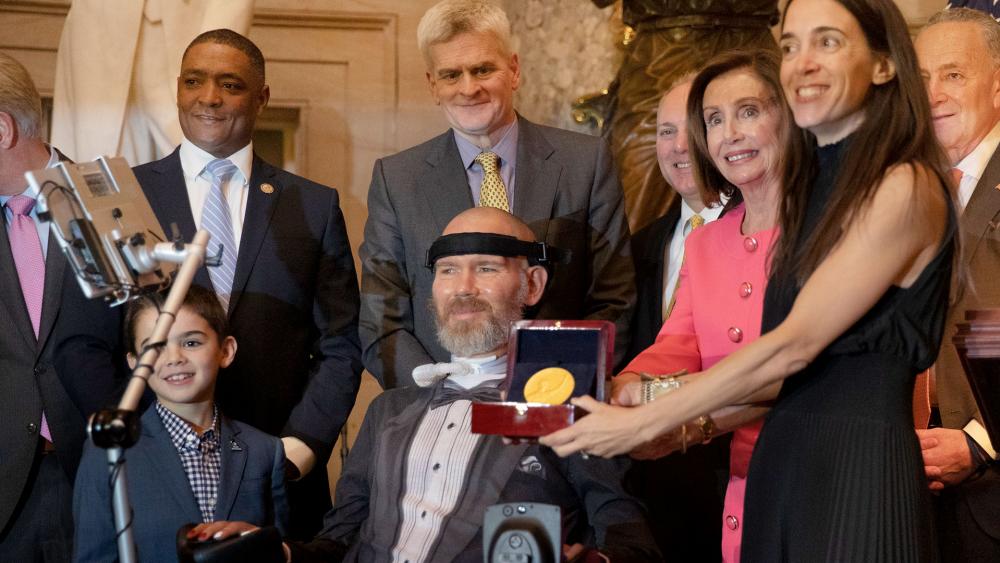 Former New Orleans Saints safety Steve Gleason received the highest honor Congress can award to a civilian when he was given the Congressional Gold Medal at the US Capitol Wednesday.

Gleason was diagnosed with amyotrophic lateral sclerosis (ALS) in 2011 and his charitable organization, Team Gleason, has provided almost $10 million in services to over 15,000 people living with ALS.

Those services include the incredible Speech Generating Device Gleason used himself while accepting the award. It allows people who can no longer speak and who also struggle with limited mobility to communicate by typing with their eyes onto a small computer tablet attached to their wheelchair.

The typed words can then be selected to be spoken or sent in an e-mail, text or chat.  This technology is life-sustaining, and it allows patients to be independent and productive.

Gleason was accompanied by his wife, Michel, and his son, Rivers. He thanked the members of Congress and the attendees, which included NFL Commissioner Roger Goodell and former Commissioner Paul Tagliabue.

"This award from the elected officials who represent the people of the United States of America is a sublime honor for me," Gleason said. "More importantly, I feel that this honor represents some joy, encouragement and even triumph for the tens of thousands of extraordinary families currently enduring life with ALS. Also the millions of extraordinary people in this country living with disabilities or other illness."

Gleason serves as an example of strength, gratitude, and optimism in the midst of the most harrowing circumstances.

"I'm grateful to the literally thousands of people who have directly uplifted me, both emotionally and physically in my 42 years," he said. "Most importantly, I'm grateful to my parents for instilling in me many of the values I have used to be successful. And of course, my wife, Michel. This is not the life we imagined. And it hasn't been easy. But through communication and compassion, we're carving out an awesome existence."

Congress has awarded the medal to fewer than 200 people overall, and Gleason is the first-ever NFL player to receive it.

Many of the speakers remembered the Saints' first home game in the Superdome in 2006 after Hurricane Katrina, when Gleason blocked a punt by the Atlanta Falcons. The play became a symbol of New Orleans' rebirth after the historic storm, with a statue of Gleason erected outside the stadium.

"For the 13 years I've known Steve, if I were to sum up his attitude, his tenacity, his mantra, it would be it's not a matter of if we will accomplish the goal, it's only when," said Saints quarterback Drew Brees who spoke at the congressional award ceremony.