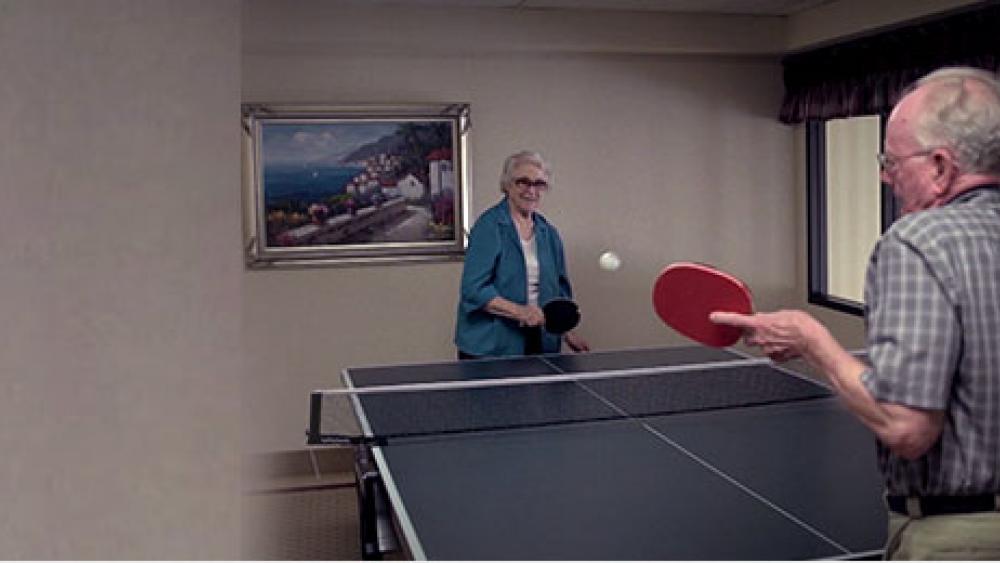 LOMA LINDA, Calif. -- Most of our health problems are said to be the result of three things: bad food choices, inactivity, and unmanaged stress.

Therefore, it's no surprise Seventh Day Adventists live an average of 10 years longer than most Americans. They don't do any of that.

Take for example Benita Welebir. At age 100 she still enjoys a healthy mind, body, and spirit.

"I've given myself to the Lord, and I've left myself in His hands, and I have trust and I have been very, very well taken care of," she said.

She's not alone. There is an unusually high concentration of centenarians in her hometown of Loma Linda, California. It's one of only five "blue zones" worldwide.

Researcher Dan Buettner found these zones when he searched for where people live the longest. The others are Okinawa, Japan; Kria, Greece; Sardinia, Italy; and Nicoya, Costa Rica.

Loma Linda is an hour east of Los Angeles where about a quarter-million people live. The reason they're so healthy is because most of them are Seventh Day Adventists.

On average they live 10 years longer than most Americans.Dr. Larry Beeson, an epidemiologist at Loma Linda University, has been involved in researching the health of Seventh Day Adventists for the last 50 years.

"Adventists have approximately the same proportion of people who die of cancer or heart disease or stroke, but the age that they get diagnosed is much later," he said.

They strongly adhere to the belief of respecting the human body as the temple of the Holy Spirit. That means no alcohol, no tobacco, and following a plant-based diet.

Eighty-nine-year-old Belgrove Josiah also lives in Loma Linda. Like Welebir, he resides at Linda Valley Villa, a retirement home for people who are able to care for themselves.

"In Christianity we have the Holy Scriptures, what God said from the beginning we should eat. He gave us the nuts and the grains and the herbs that He placed in the earth. And he said you will do better if you subsist on that type of thing," he said.

Welebir said her primary food source throughout her entire life has been vegetables.

"My sister liked fruit. Well I do, too, but vegetables had priority. And I like them raw. And I enjoyed even, 'Mother, please don't peel that potato, I want a slice of raw potato.' And that's the way I have been all my life is to eat the vitamins raw," she said.

Many Loma Linda residents, like Welebir, are total vegetarians. Others will eat eggs and some have dairy such as cheese and milk. There is a group that eats fish, and there are those who eat small amounts of poultry and beef.

"Adventists promote vegetarianism, although it's not a requirement," Beeson explained. "There is a suggestion that Adventists abstain from alcohol and tobacco, so Adventists are known to be non-smokers, non-alcohol consumers, not consumers of pork products."

"The more flesh-foods you eat, the more Alzheimer's, the more heart disease, the more cancer, the earlier the death occurs," Beeson explained. "So as people move more toward meat consumption there tends to be more of the adverse health outcomes."

"Whereas going the other direction, as people move toward removing flesh foods from the diet, there tends to be a delay in the onset of the diseases," he said.

Diet isn't the only factor in these longer lives. Seventh Day Adventists strictly observe the Sabbath.

Every week, beginning with sundown on Friday, they rest for an entire day. This allows them to recuperate from the week and recharge for the one ahead. They also use it to spend time with friends, family, and God.

Stuart Harty is one of the pastors of Loma Linda University Church of Seventh Day Adventists, one of the largest Adventist congregations. He said resting on the Sabbath includes abstaining from electronics.

"Any of those things that kind of take you back into work, try to avoid those things," he advised. "It's not like it's a rule, but if you think about it, if there's anything you're involved in during the week, if you go back to that, then you're not really taking a break from it."

Likewise, when Welebir is asked what she feels are the keys to her longevity she emphasizes down-time.

"I feel that rest is one of the most important things in aging," she said. "That if you rest, then you can get up and gallop."

Medical research confirms one of greatest killers is stress. Observing the Sabbath is a way to de-stress.

"Science has always had some kind of tension with religion, particularly in contemporary society," Harty said.

"So it's great to be able to read something in the Scriptures that suggest what we should do," he said."And then science is not only affirming it, but giving us more understanding of what it benefits us so much."

Exercise is also a priority. Throughout her life, Welebir was extremely active, running and horseback riding. These days she makes it a point to walk every day. She does what she can, even though her strength isn't what it used to be.

"It is subsiding, and that is the way God intended for people to be. And so I accept that, too, even though I don't like it!" she laughed.

Seventh Day Adventists are able to stick to their healthy lifestyle because they're surrounded by other living the same way.

Science proved her right.  Studies show that if your three best friends are obese, you have a fifty-percent likelihood of also being obese.

Seventh Day Adventists place a high priority of treating the human body as the temple of the Holy Spirit, which means on the whole, they don't drink, don't smoke, eat very little meat, exercise, and observe the Sabbath.

As a result they live an average of 10 years longer than most Americans.