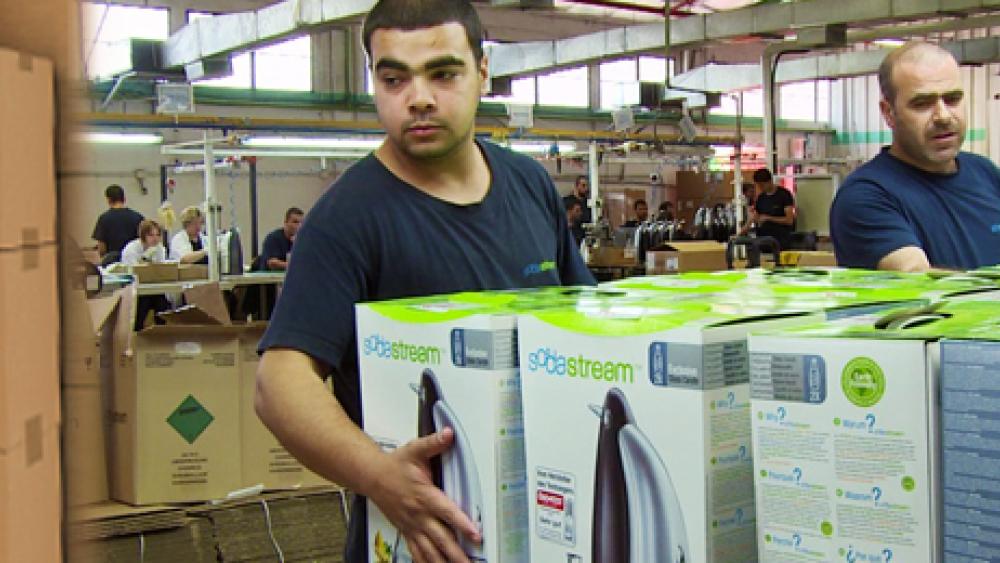 MISHOR ADUMIM, Israel -- The Israeli-Arab conflict has been going on for decades. But what many people don't realize is that Jews and Arabs in many cases actually do get along.

SodaStream is one company making a difference. It's the leading manufacturer of home beverage carbonation systems in the world. It also has a practical solution for building Israeli-Palestinian Arab relations.

"This factory here used to be a munitions factory," Daniel Birnbaum, CEO of SodaStream, said. "Until about 15 years ago, the Israeli military made munitions for artillery. And then SodaStream came and transformed it to a soda factory -- a healthy, environmental, soda factory and that might remind you [of] something from the Bible."

Just outside the front door of the factory is a statue with a scripture on it from the prophet Isaiah (2:4).

"This statue commemorates that and reminds us every day as we come to work what we're doing here. We're turning bullets into bubbles," Birnbaum told CBN's Scott Ross.

"The statue reads here in Hebrew: 'And you shall beat your swords into ploughshares and your spears into pruning hooks. Nation shall not lift up sword against nation, nor shall they learn war anymore.'"

SodaStream is more than 100 years old. Its largest plant is in Mishor Adumim. Located just outside Jerusalem, it's an area the Bible calls Judea and much of the world refers to as the "occupied West Bank." And that has caused some problems.

"We're selling our products in 45 countries around the world," Birnbaum said.

"And I tell them, 'Guys, you have a chance to employ Palestinians, to prove that we can have peace here.' And they don't want to touch it. They're afraid of the lobbying. What we do for them is we make this product in a different factory in China or some other location.  What a shame," he added.

In another incident, actress Scarlett Johansson was forced to make a choice between her work with SodaStream and Oxfam, a group fighting global poverty. Johansson was shown in a commercial for SodaStream during the Super Bowl.

"Like most actors my real job is saving the world," she says in the commercial.

Then she demonstrates how to use the SodaStream machine.

"Start with plain water, add bubbles, mix in the perfect flavor," she explains. "Look, soda that's better for you and all of us -- less sugar and less bottles."

A male voice then says, "You doing it Scarlett. Yeah, you're doing it -- changing the world one sip at a time."

But Oxfam told Johansson her work with SodaStream was incompatible because it furthers the poverty of the Palestinians. Johansson stood up for SodaStream and quit Oxfam, a group she had worked with for years.

Birnbaum said he respected Johansson for her courage. He said it was his idea to employ Palestinians at the facility.

"When I came here about seven years ago I inherited this facility. It did not employ Palestinians. It only employed Israelis," Birnbaum said.

"And I decided that it's the right thing to do was to employ people who also lived in the area and it evolved into a very interesting demographic situation where we have more Palestinians than Jews," he said.

According to Birnbaum, SodaStream is the "largest employer of Palestinian people in the world outside of the Palestinian Authority."

"We employ 500 Palestinians here. Side by side, we have 350 Israeli Arabs and another 300 Israeli Jews. And we get along together. They're not killing each other! They go to lunch break. We break bread together and we get to know each other," he said.

SodaStream pays Israeli wages -- four times what workers would earn in the Palestinian Authority, where unemployment is 30 percent.  And the workers say they're happy, too.

Yousef Besharat is a Palestinian Arab who works at the factory. He told CBN News his salary helped him to build a home in just a year. He said there's no discrimination between Jewish and Arab workers at the plant.

The plant produces about 15,000 soda-makers a day. There are dozens of regular, diet and naturally sweetened flavors boasting far less calories than bottled soft drinks.

The factory also manufactures its own specially designed bottles, which can be used over and over again for up to 10,000 liters (about 10,000 quarts) of soda.

Birnbaum gave CBN's Ross a tour of the factory. He said he calls the room where they assemble the valves "the United Nations."

"We have people from all over here. You'll see Palestinians and Israelis. You'll see Russian immigrants and Ethiopians, Bedouins, women and men. I love this hall," Birnbaum said.

He introduced CBN News to the shift manager, whom he called "a wonderful Palestinian fellow who started as an entry level and built himself up here at SodaStream in the last few years to shift manager."

Nabil Besharat is a father of six who has worked at the plant for four years. As shift manager, Besharat is in charge of about 25 people, including Jews and Arabs.

Nabil says he came to the company "for good opportunities, for a good job, for good money," and he found those things here.

"We work here with Jews, with Christians, with Muslims -- all -- with Druze," Nabil told CBN News. They don't even mention the word conflict, he added.

Sadly, disturbances by some Palestinian employees did erupt during the fighting between Israel and Hamas earlier this summer, which led to the firing of dozens of Palestinians.

Management says things are now back on track. Still, they are considering closing the plant, not because of pressure but for financial considerations.

Nevertheless, Birnbaum says the company is doing its part to build bridges and make peace and that's a miracle.