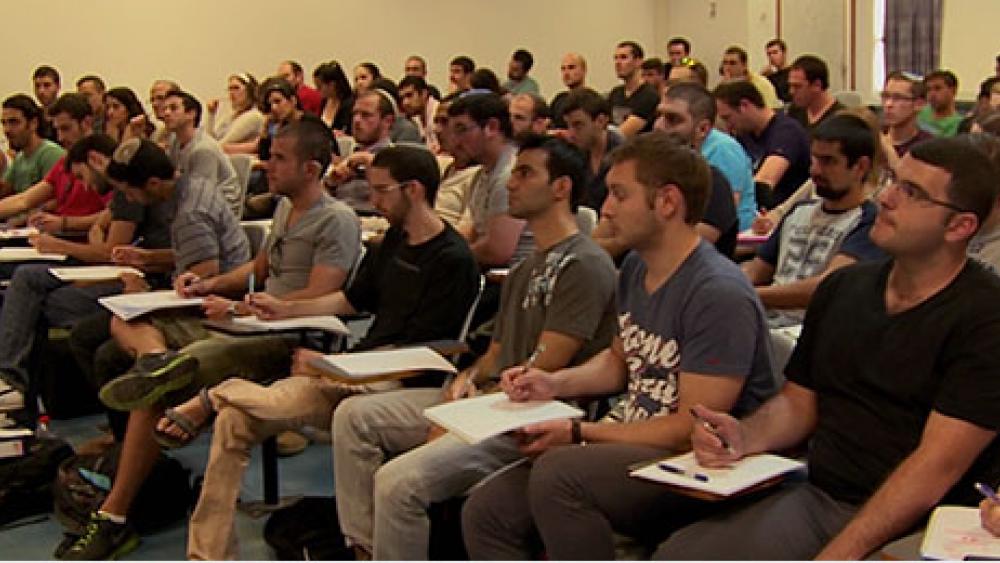 ARIEL, Israel -- Parts of the U.S. and European governments are trying to block an Israeli university from developing good relations with and helping its Arab neighbors primarily because the foreigners don't agree with the Bible.

Ariel University is located in the hills of biblical Samaria. Established in 1982 as a branch of Bar-Ilan University, the school sought to improve higher education here, especially in the sciences, engineering, and health.

Now it's at the forefront of cancer and other research.

Professor Aharon Friedman is a scientist and the head of the university's Schlesinger Center for Compact Accelerators and Radiation Sources. He showed CBN News a giant particle accelerator.

Interestingly, he said every home has one.

Friedman said the particle accelerator at Ariel University was built in the early 1960s and there are only a few like it in the world.

But it's not obsolete and actually works more efficiently than the modern ones do today.

"The main research that we actually have occurring here now is cancer research," Friedman explained. "We have discovered that that particular radiation causes cancer cells to kill themselves."

Friedman said it's like putting them on a "suicide mission" but "all the healthy cells are alive and well."

The university's home is Ariel, what some call a "West Bank settlement" in territory Palestinians want for a future state. It's also part of the land promised to the Jewish people in the Bible as an eternal inheritance.

That has led to boycotts of the university by European governments and the U.S. State Department, Friedman said.

Oddly enough, despite the politics, the university represnets a model for co-existence. Some 15,000 Israeli Jewish and Arab students study here together in Hebrew -- without a problem.

CBN's Scott Ross asked several students why they chose Ariel University and if it causes them problems.

"I was looking where there was a good psychology program and something of an eclectic student body, and I found it here," said Shira, a psychology major from New York.

Efrat, a religious IsraelI woman studying public relations and marketing management, said she chose the university "becauseof the professional department here and especially in the communication."

Yossi, who immigrated with his family from Ethiopia is studying electrical engineering.

"The people are so warm and happy, the teachers, too," he said. "It's a small university so they can give a good care to every student they see."

"My relationship with other people is very good as well, and I don't have any problem with anyone," Yasser told CBN News.

Most of the students say people are afraid to visit the university because they've never been there and don't know what a nice and safe place it is.

"There are a lot of hostile Arabs around here and there is a lot of incidents around here so you know the parents are afraid for the children," Yossi said.

Most of the students who spoke with CBN News said they hoped they could be a model for Jewish-Arab relations in the rest of the country.

"In my apartment the next door is Arab people and we have a good relationship, we don't have a problem at all," said Eli Ron, an Israeli reservist who is studying electrical engineering.

Yossi said he wasn't surprised at how effective they are.

"I have to be part of the system here that sends a message to everyone," Yossi said. "The thing is that people remember this place from bad times, harsh times, when things were rough or bad publicity in the news. But no one really comes here to see what happens so they don't really know," Yossi said.

"Maybe we will change something because I think people really think that it's a very hard or not a safe place but it's not true," Efrat said about the media attention.

"The things that we're trying to say about this beautiful place can go outside by the TV, by the media, and people will know that it's a nice place," Eli Ron added.

Chancellor Yigal Cohen Orgad credits the university's success to creating an informal atmosphere in which students see each other eye-to-eye.

He thanked God there are no conflicts at the university.

"We passed in Israel two intifadas, this university," Orgad said. "There was [not] one evening or one day of tension between Jews and Arabs that study here."

Despite its cutting-edge research, pastoral setting, and quiet campus life, some in the international community see Ariel University as a controversial place.

"We don't have problems with other universities and research institutes," Orgad said. "We have real problems with many governments. First of all in Europe and part of the American government, i.e., the State Department, that tries to boycott us formally or informally."

Why? "Because they think we don't have the right as Jews to live here in Samaria," Orgad told CBN News.

"Instead of encouraging cooperation, instead of encouraging research activities that serves the upgrading of the economic level of the Palestinian population, those unwise moves deter or prevent or slow down the ability for our applied research to support the needs of the environment and the community in this region as a whole," he explained.

And yet, Orgad believes there will be peace one day between Israel and its Arab neighbors.

"I'm sure one day we are going to have peace with our Arab neighbors. Based on this understanding that we are here to stay, we shall find a way to live in peace," he said.