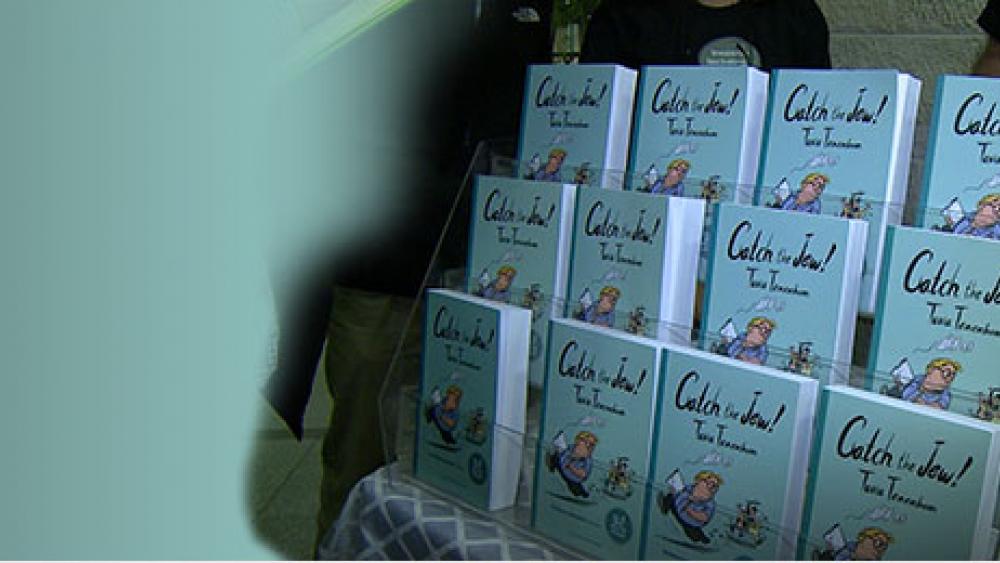 JERUSALEM, Israel -- When it comes to Middle East peace, the world often asks what prevents Israelis and Palestinians from making it work. A new book blames a hidden party for fueling the hate between the two.

CBN News took a closer look at the frightening influence of some European, and even American, groups.

Anti-Semitism is alive and well in Europe, with attacks in France and Austria doubling since 2013. Already this year there were deadly attacks at a kosher supermarket in Paris and terror shootings of Jews in Copenhagen.

A new book, called Catch the Jew, claims Europeans are fanning the flames of the Israeli-Palestinian conflict by exporting anti-Semitism to the Middle East.

The book is full of humor, and Tenenbom uses salty and sometimes crude language in his accounts.

"There's not only Jews and Arabs here, the way I thought, fighting it out, there is another tribe here and the tribe is called Europeans, some Americans, but mostly Europeans," author Tuvia Tenenbom told CBN News.

Tenenbom says European governments are funding organizations that say they help Palestinians, but in fact are so anti-Israeli and anti-Semitic, they create friction and even fabricate things against Israel.

"In reality, they have come to this land to implant and instill hatred in the heart of every Muslim against the Jews, and [they] also sponsor self-hating Jews," Tenenbom said.

Their purpose is "to catch the Jew doing something wrong, to declare the Jew evil, and to end the story of the Jews being here [in Israel]," he said.

For six months, Tenenbom and his wife, Miriam, interviewed hundreds of Israeli Jews and Arabs, Palestinians, and foreign aid workers, asking about their jobs and beliefs.

Paid by a German newspaper, Tenenbom hid his Jewish identity and posed as a German named "Tobi." In the eyes of Palestinians and internationals alike, his interviewees thought being German made him a kindred spirit in hatred of the Jews.

Europeans send monitors to checkpoints, crossings between Israeli and Palestinian areas manned by Israeli soldiers, hoping to catch soldiers doing something the Europeans don't like.

Tenenbom captured much of the material for the book on video, like the conversation with Atef, a Palestinian serving as a top researcher for the pro-Palestinian Israeli human rights group, B'Tselem.

"Ah, because we're Germans we support the Jews, but ask him if he remembers that we also killed them," Tobi says to Atef.

"You don't believe it?" Tobi asks, to clarify the response.

"I said, wait a second, I have nothing personal against Atef. I want you to retract the reports that he's signed on. How can you believe a guy, how can you trust a guy whose research has found that there was no Holocaust?" he asked.

Another example involved Casa Per La Pace Milano (House of Peace), a group funded by the European Commission. It brings young Italians to Israel for "peace education," to see the situation in Israel and Palestinian areas firsthand.

Their Israeli tour guide, Itamar Shapira, describes himself as an "ex-Jew" and speaks against Israel.

For example, during a tour of Jerusalem's Yad VaShem Holocaust Memorial, Shapira compared Israelis with Nazis.

"This one is a very known massacre. It happened here in [the] '48 war.  [It's] called Deir Yassin," Shapira told the group.

The museum fired Shapira, but he continues to conduct private tours there.

Tenenbom's German connection also gave him access to Palestinian leaders like former security chief Jibril Rajoub, considered a Palestinian moderate. Rajoub, who is the Palestinian Minister of Sport, is currently in the news for trying to get FIFA -- Federation of International Football Association -- to kick out Israel's soccer team as a way of boycotting Israel, an attempt that failed.

He told Tenenbom even Adolf Hitler didn't know how bad the Jews are.

"My question to you was do you think the Israelis have changed?" Tenenbom (Tobi) asked Rajoub, who was sitting in his office with a giant picture of former PLO chairman Yasser Arafat behind him.

In another clip, Hanan Ashrawi, a Palestinian Christian, wouldn't talk about the existence of a Jewish temple in Jerusalem. Her former boss, Arafat, said Jews never lived here.

"Of course the Jewish tribes were here, but they weren't, you know, a state the way they claim to be," Ashrawi said.

"Was there a temple?" Tobi asked.

"I have no idea. I'm not an archaeologist," she answered.

Tenenbom, whose grandfather was murdered by the Nazis, said he doesn't blame the Arabs. He lays the guilt squarely on the Europeans who pay them.

He had this message for Israelis at a lecture in Jerusalem.