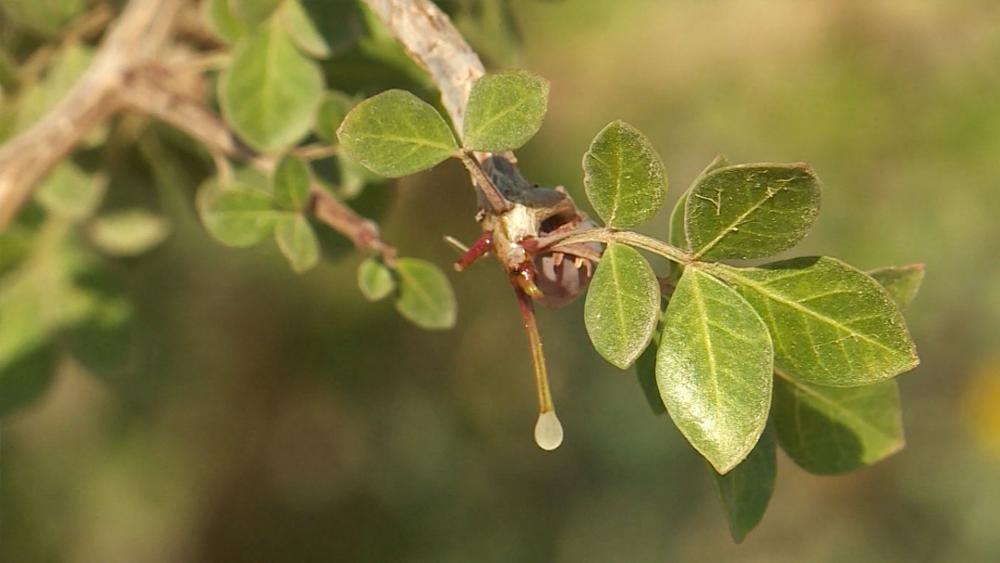 THE DEAD SEA, Israel – The Bible speaks of the Balm of Gilead. It was a real plant in the ancient Holy Land, used in medicine and cosmetics and even for worship in the Jewish Temple. Now a modern-day Israeli farmer is reviving that biblical agriculture, along with Frankincense and Myrrh, but he's also getting some resistance.

Erlich's still in the early stages, but already he's helping turn the desert green on a tract of land near the Dead Sea and Jericho.

"Along the years, I built a collection of rare biblical and medical – medical perfume – plants, and I understood that there are more very interesting plants in my collection that have potential to benefit humanity.

It started with the Balsamon tree, better known as the Balm of Gilead.

For 1,000 years, ancient Hebrew farmers in this area were the only ones in the world known to cultivate this exotic plant, using it for medicinal and cosmetic purposes. Now Erlich's biotech adventure is reviving that trade and more.

"He knew how to make out of it most important medication of the ancient world, a perfume that was considered to be the best perfume in the Roman Empire," Erlich explained. "It says it's the first ingredient of the incense of the Holy Temple and since the Second Temple period, it says (it was used) as the anointing oil of the kings of Israel. At the sixth century, it disappeared from here, together with the Jewish people."

Erlich got his first plant from a shoot that was smuggled by a German scientist out of Saudi Arabia and brought to Israel. Oddly enough, the plants he grows are thriving in the intense heat and salty soil on the shores of the Dead Sea.

Erlich has six acres of Balm of Gilead trees so far and another 5,000 plants ready to be planted.

"Right now I'm the only – and the biggest – Balm of Gilead farmer in the world," he said.

The resin from the bark, the berries and the leaves of the Balm of Gilead can all be used, and each has a different fragrance and properties.

Frankincense of the Holy Temple

"This is my second baby after the Balm of Gilead. It started with the vision of bring back the Balm of Gilead to the shores of the Dead Sea, but after a few years, I understood that I have some very interesting plants in my collection," he said. "And now I have a team of plants that I want to make into products."

There are more than 20 varieties of Frankincense, but this is the one from the Bible – and it's considered an endangered species.

"This is Frankincense of the Holy Temple. Now there is no agriculture for this tree. This tree only grows wild in different countries in the Horn of Africa and since there is such a big demand for this, there is an overusing of the plant," he said.

Myrrh and the Gifts of the Magi

Erlich is also growing Myrrh and there may be a connection to the gifts the magi brought to Jesus at his birth.

"Another way to introduce myself is as a magi," he said. "We know the three magi that brought Miriam presents. They gave her Frankincense and Myrrh and gold. Now there is a claim that the gold is the Balm of Gilead because it was more precious than gold. This is the diamond of the incense, the diamond of the medical plants."

Erlich, who describes himself as a man of faith but not religious, is also growing a number of other plants need to make the incense for the Temple. That has caught the attention of some religious Jews who would like to see a Third Temple built in Jerusalem.

But despite his excitement over his team of plants, Erlich has also had some big challenges. His plantation is in biblical Judea, known to the world as the West Bank. And that has scared off an American company who partnered with Erlich for years. One reason: backlash from BDS – the anti-Israel Boycott, Divestment and Sanctions – movement.

"I'm sorry for this company – that they surrendered for this wicked movement – but what can I do about it?" he asked. "I can only fight it by succeeding without them."

Erlich has had to dismiss his Israeli and Palestinian workers and rely on volunteers like Kinneret Norin and her friends, who spent a week here pulling weeds, among other things.

The setback isn't stopping Erlich. His goal is to start a research and development center for medical plants that he hopes will benefit the area and the region and, as the Bible says, make the desert bloom.