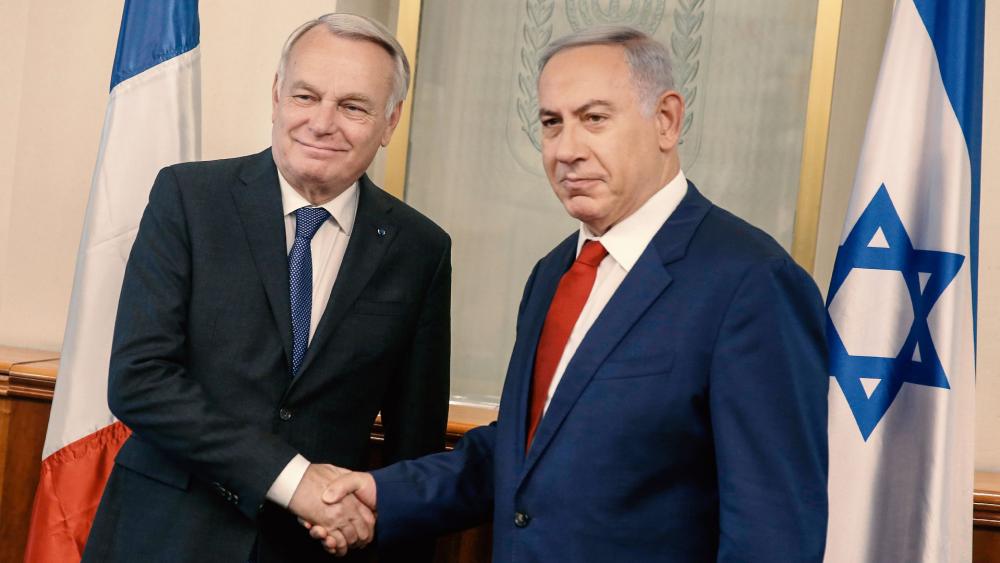 JERUSALEM, Israel – France says it will go ahead with its Middle East peace conference at the end of the month despite Israel's objections.

The French plan is to host dozens of foreign ministers on May 30 ostensibly to jump start the moribund Israeli-Palestinian peace talks. That conference, which excludes Israel and the P.A., will be followed by another later in the year. If that doesn't bring the desired results, France says it will unilaterally recognize a Palestinian state.

While the P.A. welcomes the French initiative, Israel rejects it.

"This morning I met with the French foreign minister," Netanyahu said at the cabinet meeting. "I told him that the scandalous UNESCO decision, which was supported by France, that does not recognize the Jewish people's ties – which are thousands of years old – to the Temple Mount, casts a shadow on the fairness of any forum that France tries to convene."

The UNESCO resolution, which France supported, denies any Jewish connection to the Temple Mount or the Western Wall.

"He told me that this decision stemmed from a misunderstanding and that he would personally see to it that it does not recur. I told him that the only way to advance a true peace between us and the Palestinians is by means of direct negotiations between us and them, without preconditions," Netanyahu said.

"Our experience with history shows that only this way did we achieve peace with Egypt and Jordan and that any other attempt only makes peace more remote and gives the Palestinians an escape hatch to avoid confronting the root of the conflict which is non-recognition of the State of Israel," he continued. "They simply avoid negotiating with us as part of their desire to avoid resolving the root of the conflict, which is recognizing the national state of the Jewish people, i.e. the State of Israel," he explained.

Foreign Minister Director General Dore Gold said the French initiative has more than one problem, not the least of which is not recognizing Israel's right to exist as the Jewish national homeland.

Gold pointed that it would be much easier for Abbas to meet with Netanyahu in Jerusalem than it is to organize an international conference in Paris. In fact, he said, the French initiative does the opposite of its purported goal, further distancing a negotiated solution.