March of the Living: Bringing Resurrection from Holocaust Death 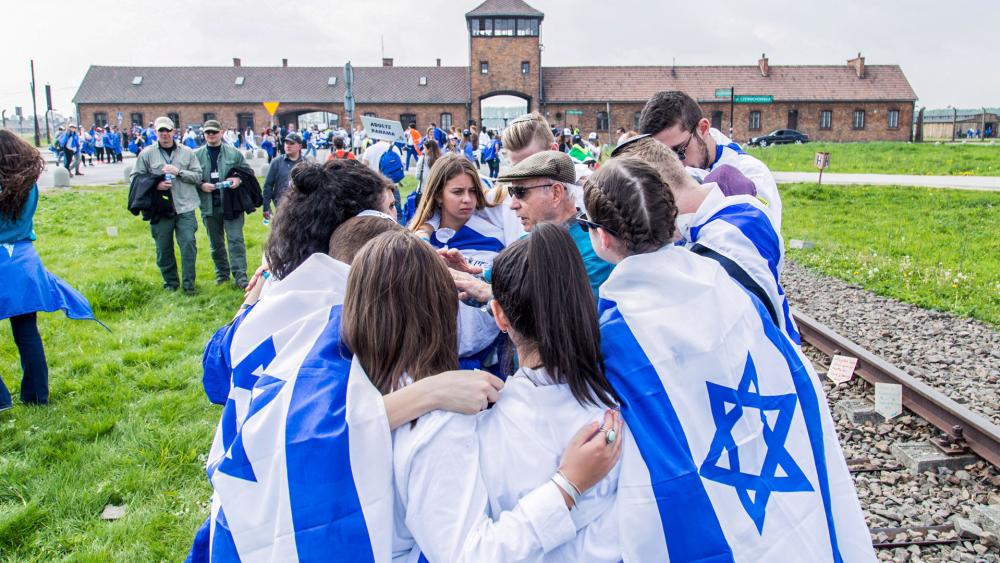 4892170819001
March of the Living: Bringing Resurrection from Holocaust Death

JERUSALEM, Israel -- It's called the March of the Living. Thousands of young people meet in Poland and Israel each year to learn about the Holocaust from where it happened.  And the lesson takes on much more meaning in the giant classroom of reality.

"We decided to take the 'whys' from the classroom and to really confront what happened, to the place where the crime took place – we're talking about camps, marches of death," said Dr. Shmuel Rosenman, chairman of March of the Living International.

More than 10,000 marchers, young and old, from around the world walk nearly two miles from Auschwitz to Birkenau – the Nazi death camp complex – on Yom HaShoah, Israel's Holocaust Remembrance Day.

A week later, they fly to Israel for the end of the lesson. On Israel's Independence Day, 3,500 walk the streets of Jerusalem toward the Western Wall.  From the Holocaust to Israel's rebirth, this final march is the Resurrection (or Redemption) Walk.

"We are trying to teach -- not revenge -- but love, tolerance, understand your fellow man," Rosenman told CBN News in Poland.

In 28 years, more than 250,000 people from 52 nations participated in the march. Rosenman said tolerance could help avoid another Holocaust.

"But unfortunately you see what happened in the last 70 years all over the world. So the world did not learn much," Rosenman said. "We believe that each one of the participants can go to his own community, his own family – Jew or not Jews – and to be a change agent for love of the fellow man."

Walking in the Path of Death

Nazis murdered 6 million Jews from 1933 to 1945 – half of them in Poland and 1 million in Auschwitz-Birkenau.  Marching that same ground makes a huge impact.

Emily Klimberg from Miami said she couldn't imagine what they went through.  "And I can't put myself in their shoes, even though I've tried to put myself in their scenarios so many times. And like walking through the grounds like, someone could have been shot there," she said.

Speaking to CBN News behind the barracks at Birkenau, Shawn Shapira, 17, from Los Angeles said he was moved by just thinking about what had happened.  "It's really only 70 years. It really could have been me," he said.

As time passes, fewer survivors remain to tell their stories. Adele Besserman, now 86, is one who still works to spread the word to a younger generation.

"I was 9 years old.  I was in the Lodz Ghetto," Besserman told CBN News. "And here I am on my fifth trip, to be with the children."

"And you know what? That monster didn't win completely! I have three children, three daughters-in-law, six grandkids and one great grandson and I love every moment of it," Besserman said.

Organizers want to make sure this is never forgotten.

"We're kind of the generation that has to tell their stories," said 18-year-old David Abady. "It's just like a roller coaster of emotions, but it's something that I think everyone needs to experience."

Some already tell of personal connections.

"My grandma's a survivor," said Klimberg.  "She was from Lithuania and her family owned a windmill and one of the Christian workers kept her there in their house.  And a little girl was like scrutinized by a Nazi, the Christian little girl, and asked, 'Are there any Jews here?' and she said 'no' and she saved my grandmother's life."

"My entire family is from Poland. Half of them died here. The other half made it to America right before the war started," Shapira said. He showed us a picture of him and his brothers and great grandmother on one of her birthdays.

"My mom packed me this," he said.  "She wanted me to see this as I was walking through the camp."

Many young people wrapped themselves with Israeli flags – a sign of victory.

Paul Hoffman from Miami, Florida, was one of them.

"My grandmother was a survivor," Hoffman said. "Her and my two great grandparents were on a train going to a concentration camp.

"Around seven people jumped off and they hid in the woods. But some of my family members didn't jump off and they actually perished," he said.

Hoffman carried a small homemade sign, like many others, who laid them along the railroad tracks leading to Birkenau that carried many Jews to their death.

"It says: 'never forget' and I have [written] 'in memory of my great grandparents Simon and Shura Pupko and in honor of my grandmother, Masha Pupko.'"

A Witness to the Witnesses

If seeing is believing then the march spurs them to action.

"I think it's important to educate ourselves. The future depends on this. It could happen again. We're trying to prevent that and we have to speak up," Klimberg said.

Shapira's friend, Walker Reinfeld, 18, said he realized what a privilege it was to go on the march with actual Holocaust survivors. Now they have a responsibility to "be the witness to the witnesses," he said, adding "the fact that we're here to carry on their story and their difficulty and what they did to get through."

"I think there really is a message," said Shapira. "If you come back and you see this place, you learn about the horrors that happened in the Holocaust. It'll never happen again and it is.  It's happening all over the world, in Africa especially, where we really need to step up and make a difference 'cause one person making a difference can really save someone."

Christians participate, too, to show their love for Israel and the Jewish people, like Polish Christian Jacek Kucz.  He and others stood in Birkenau in front of a giant sign on which the priestly blessing, known as the Aaronic Benediction (see Numbers 6:22-27), was written.

"As Christians [in Poland] we are here to show our gratitude and release blessing toward the Jewish people who have gone through so much suffering on Polish land," Kucz told CBN News.

"A lot of innocent blood was shed in the land of Poland, so we pray to God for forgiveness for what has happened to the people of Israel," he added.

"I'm here because my great grandfather was a prisoner of this camp and fortunately he survived," said Rafael, another Polish Christian in the march. "I feel that life has victory over death."

Michiya Tanaka traveled all the way from Japan to participate.

"People said 'where was the world when it was happening?'" Tanaka said. "And it makes me think what should I do the rest of my life. My heart is to know this and I really need to tell the world what happened here."

In Israel, the mood was completely different and full of joy as the youth walked along Jerusalem’s Old City walls.

“After seeing all the pain and sorrow in Poland, coming here and landing here in Israel just brought spirits and good energy,” said Jesse Flynn from Canada.

“The energy here is great. Lots of people, lots of happiness and we hope that – never again,” said Daniel from Brussels, Belgium.

At the Western Wall, they gathered to sing and pray for Israel – a sign of triumph of the March of the Living in Jerusalem.

“It felt right, seeing how the Jewish community survived and extermination [attempt] and were able to build a community here that’s prosperous,” said Michael Warter from Argentina.

“I feel so proud to be a Jew and I’m so happy I’m here and we have this country,” said Jeanette Gindi from New York.

Some teens danced to a popular Hebrew song that seemed to sum up the trip: Am Israel Chai – the people of Israel live.

Rafael, the Polish Christian declared it in Hebrew: Am Israel Chai!