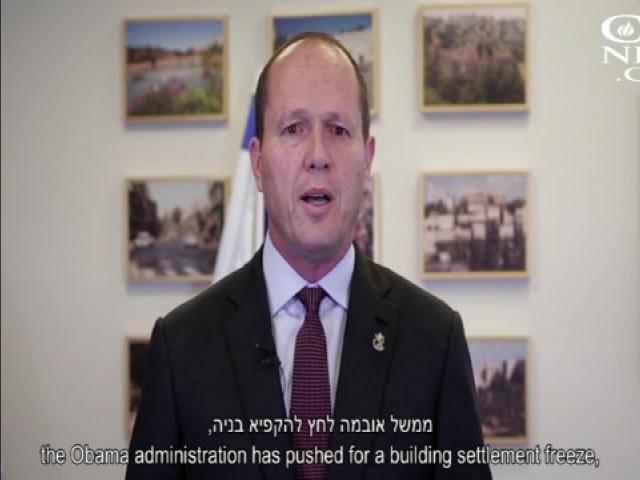 The social media campaign includes a one-minute video in Hebrew with English subtitles in which Barkat summarizes President Obama's anti-Israel moves while in office, and encourages Israelis to thank the new U.S. President Donald Trump for his support of Israel and sign an online welcome letter.

"After eight difficult years, a true friend is entering the White House," Barkat said at the launch of the campaign.

"Together with the citizens of Israel, I congratulate President Donald Trump on his election to President of the United States and leader of the free world. I thank him for his support of Israel and his efforts to move the US embassy to Jerusalem," Barkat said.

According to a statement from his office, the Palestinian Authority and its supporters "are working aggressively to prevent the US Embassy from moving to Jerusalem." Barkat hopes to counter this by calling on Israelis to thank Trump "thereby strengthening his support of Israel."

The campaign comes in the wake of political tensions created by United Nations Security Council resolution 2334, which condemns Israeli settlement activity in biblical Judea and Samaria, a.k.a. the West Bank.  That would include the Old City of Jerusalem and the entire eastern part of the city and its holy sites, such as the Western Wall and Temple Mount.

Palestinians and the Arab World have threated to unleash a wave of violence if the U.S. moves the Embassy to Jerusalem.

The campaign and letter are meant to provide Israelis with "a concrete means to work against these anti-Israel forces."

"This call to Israel's citizens is a reaction to our enemies who are trying to prevent the move of the embassy and wish us ill," Barkat said.  "I am reaching out to the entire spectrum of Israeli society.  Together, we will remind Washington that Israel remains its greatest friend and closest ally."