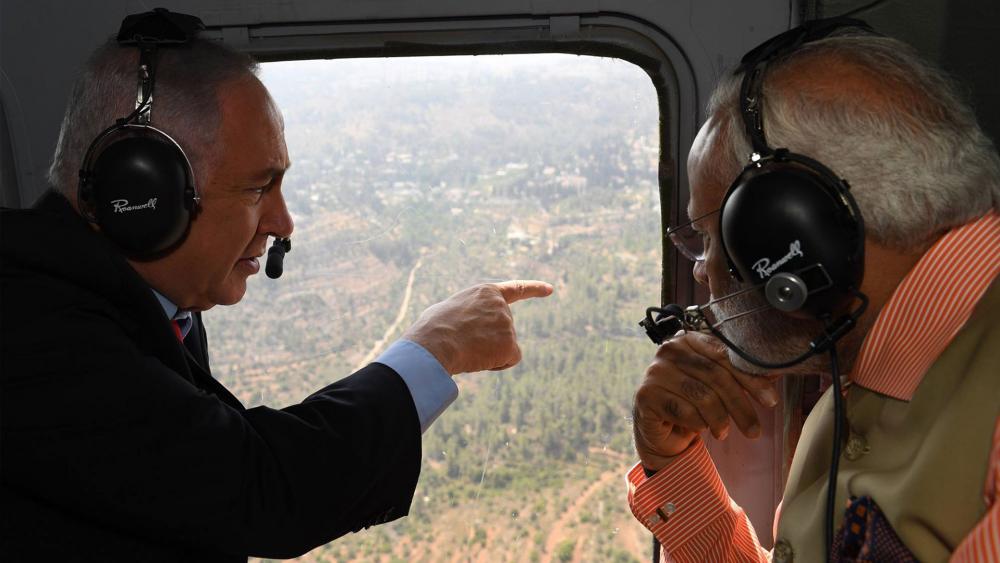 JERUSALEM, Israel – Indian Prime Minister Narendra Modi is spending the last day of his historic visit to Israel in the north. He traveled by helicopter with Israeli Prime Minister Benjamin Netanyahu to Haifa.

Israel and India established full diplomatic relations in 1992. Over the past 25 years, the relationship between the countries has grown steadily, particularly in defense, agriculture and trade.

One of the first stops was the British Military Cemetery where Indian soldiers killed in World War I are buried. There they placed flowers on the memorial and unveiled a plaque commemorating the soldiers' sacrifice in the battle to liberate Haifa.

Thursday's events included a visit to a Galmobile desalination plant that can supply drinking water to 22,000 people a day.

Since his arrival Tuesday, Modi has met with senior government and military officials and experienced a broad swath of Israeli culture.

Following a lengthy meeting Wednesday with Netanyahu, the two leaders issued a joint statement highlighting salient points of their discussions and expanded cooperation to combat terrorism and strategic threats to regional peace and stability.

Acknowledging that his country "has suffered firsthand the violence and hatred spread by terror," Modi said he and Netanyahu "agreed to do much more together to protect our strategic interests and also to cooperate to combat growing radicalization and terrorism, including in cyberspace."

On Wednesday evening, Modi joined some 10,000 members of the Indian community at the Tel Aviv Convention Center for an evening featuring traditional Indian food, dress and cuisine.

Earlier Wednesday, Modi took part in an emotional meeting with 11-year-old Moshe Holtzberg, whose parents were killed in a terror attack in November 2008 at the Chabad House in Mumbai.

Accompanied by both sets of grandparents and his Indian nanny who came with him to Israel, the boy told Modi he misses India and hopes to return to Mumbai when he gets older and be the director of the Chabad House there.

Netanyahu invited him to come with him on a future visit to India.

Following a mid-afternoon visit at a conference in Tel Aviv featuring Israeli and Indian companies' innovations, Modi will be honored by a state sendoff at Ben Gurion International Airport before his 5 p.m. departure.