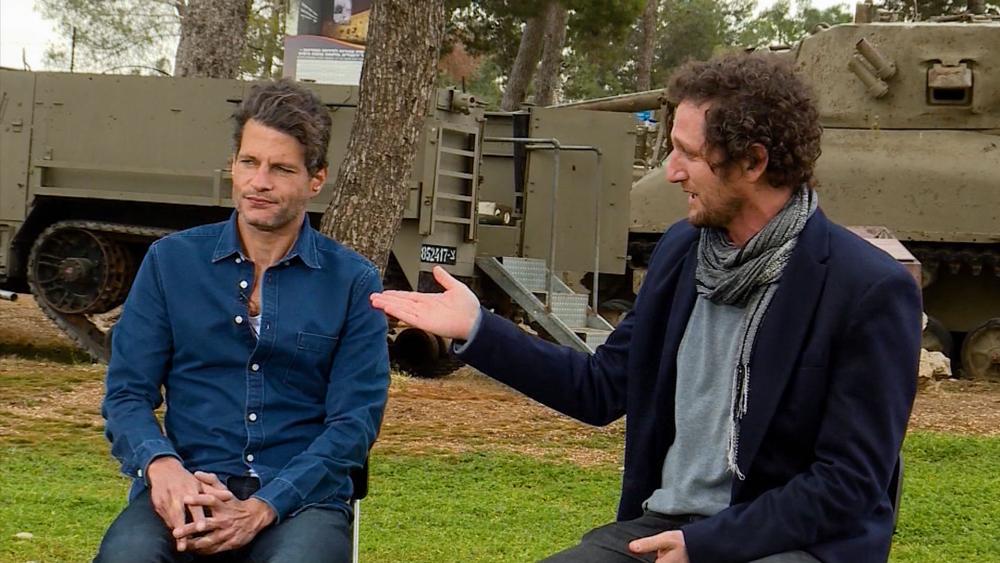 JERUSALEM, Israel --  Arab nations surrounded Israel in June of 1967. The Jewish nation's survival hung in the balance over six days of war.

Those days are relived in the CBN-produced documentary, In Our Hands: The Battle for Jerusalem, which tells the story of the Six-Day War through the eyes of Israeli paratroopers.

Production for In Our Hands took just under one year to complete. One of the most pivotal scenes was shot at Ammunition Hill in Jerusalem, a site that is now an Israeli war memorial.

Idan Barkai is one of the actors in the film, playing the brigade's chief intelligence officer, Arik Achmon. "We were shooting on this jeep, right here," he told us. "This was actually originally Motta Gur's jeep -- the character played by Sharon."

Barkai was talking about Sharon Friedman, the actor who played Lt. Gen. Mordechai "Motta" Gur in the film.

Many of the film's Israeli actors told us about their fathers, grandfathers or uncles who served in the Six-Day War.

"My grandfather - Grandfather Aaron - was in the siege on Jerusalem," Friedman said. "And he was telling about it to me, when I was young. And it's unbelievable that I am playing the one who released the city and took it back. It's the place where my grandfather used to be here, unprotected," he said.

Both Lt. Gen. Motta Gur and intelligence officer Arik Achmon are impressive men. We asked the actors if they were nervous about portraying these real-life war heroes.

"You feel obligated to honor that person," Barkai said. "But Arik Achmon is such a great person, I was humbled. I just tried to do my best, try to give out the emotion and the tension of the moment I was in."

"Me, myself, I served the army," he continued. "But I never really fought in big great wars, fortunately."

"I myself was in the army. I was in the paratroopers," Ben Moshe said. "So I could give my input to the part and the movie, but it was more real than just a memory of Israel's history."

We asked Ben Moshe what made him want to be a part of this film.

"This is the first time that I am here, since I was in the army. So, it is very special for me. i am very honored to do it, first of all, to be a part of it. And to let people, to let the world see what we came through," Ben Moshe said.

And what scene was the most memorable for him?

"The most memorable was with the actress who plays the woman that gives me the flag of Israel to put on the wall. It was a very emotional scene," he said.

Guiding the emotional scenes of the movie was the film's producer and director, Erin Zimmerman.We asked her how difficult it was to make these historical scenes come alive on film.

"It took an enormous team of people," Zimmerman said. "We did many scouts of this place. My director of photography and I came here several times and we would literally walk the battlefield, walked the trenches and say, 'OK, this scene -- can we do this here?' We took every angle into account. We had a joke on our set. It only took them four hours to fight the battle of Ammunition Hill, and it took us 26 hours to film it."

"This is Israel. We Glorify Life"

Although the film portrays dark days for Israel, it ends with great hope. Zimmerman told us that was done by design.

"It was intentional to end on a high note. But it was also my intention not to give an empty, 'Hey, yeah, war we won!' Because there were so many casualties and so many injuries and people who both mentally and physically were never the same after that war," she said. "War has a price and nobody wants war. And one of my favorite things is what Elan Wald, who runs Ammunition Hill, whose father was killed in the battle of Ammunition Hill. We don't glorify death. We don't glorify war. This is Israel, we glorify life. And I think that is what I want to come out of this film."