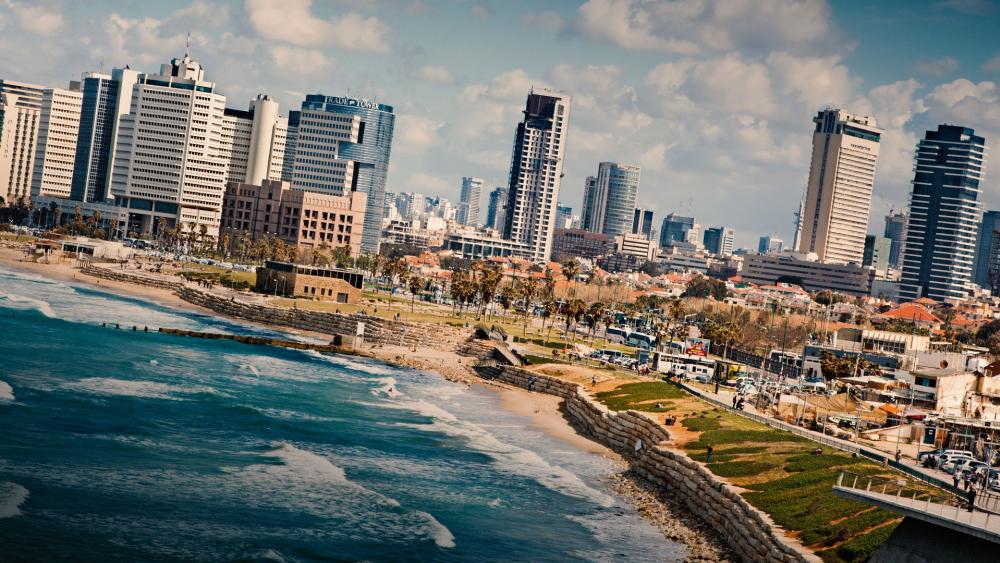 TEL AVIV, Israel – President Trump has pledged to move the U.S. Embassy from Tel Aviv to Jerusalem. While the Old City of Jerusalem is the center of biblical events, Tel Aviv has become Israel's economic and hi-tech center. As CBN News' Scott Ross found out, the bustling city also fulfills biblical prophecy.

Situated on the shores of the Mediterranean, Tel Aviv could be described as Israel's New York City. In just over 100 years, it's become one of the world's leading startup cities.

Issac Dror, who serves as education manager at Independence Hall, told CBN News it was a bunch of sand dunes not so very long ago.

Asked what the vision was for the city, Dror said it was to establish a modern Jewish city that speaks the Hebrew language – a foundation for a Jewish life.

"And the idea was to realize the dreams, the hopes, the prophecies of our prophets and the dreams of the Jews all over the world," he continued. "You know the most amazing thing about the Jewish people … is the fact that we keep dreaming the same dream, wherever we are in the same time through the centuries: next year in Jerusalem; next year in Jerusalem."

Dror explained that at first there were 66 Jewish families living in the Old City of Jaffa.

"You know…narrow alleyways, sewage in the street, an oriental city struggling, and Jews in Jaffa dream about …breaking from the walls of Jaffa and establishing a Jewish neighborhood," he continued. "We paid in gold for every inch here and the money was paid to whom? To the Ottomans? Who are the Ottomans?  That's not their land," he said.

"This was redeeming the land of Israel," Dror said.

"This is a significant place," said Ross, as the two sat in front of the building.

"In the book of Ezekiel, Ezekiel lived in a place called Tel Aviv, a Jewish city in Babylon where he was prophet, a tiny Jewish community in the desert of Iraq, exiled Jews," Dror continued.

In 1950, Tel Aviv and Jaffa merged to form Tel Aviv-Yafo. It's also where the prophet Jonah caught a ship to flee from the Lord and ended up in the belly of a large fish.

Today, it's Israel's second largest city and though it's home to all foreign embassies, Tel Aviv is clearly not the biblical capital of Israel and the Jewish people.

"This city does not have to bear a heavy load that Jerusalem is carrying. It is the holiness of Jerusalem," Dror explained. "And Tel Aviv does not have to carry all this history, but Tel Aviv is very, very special in a different way."

Israel's founders sensed they were fulfilling prophecy when Tel Aviv was established. In the middle of this secular city, surrounded by construction cranes, one monument says it all.

"This is from the Bible – Jeremiah. And it says here, 'I shall rebuild you and you will be built, O, virgin of Israel.'  This is the motto of the people who established Tel Aviv. This is what's going on (over) there," he said, pointing to the construction.

"As we stand here now, the prophecy's being fulfilled right in front of your eyes," Ross said.

"It is the first time after 2,000 years, the Jewish people building the Jewish land, speaking Hebrew with their Bible in their hand, in the land of Israel," said Dror.

Ross met with Jerusalem University Director of Education Zeev Ben-Shachar who gave him a modern comparison to the founding of Israel and Tel Aviv, today known as Israel's Silicon Wadi.

"What is it about Tel Aviv that so much creativity, innovativeness has come out of this area?" Ross asked Ben-Shachar.

"There are more than 700 startup companies concentrated in this city. There's venture capital that is being invested in Israel, which is the highest per capita in the world…combined, of course, with Israel's culture and with Israel's circumstances have made Tel Aviv what it is today, the second Silicon Valley of the world," he explained.

"And I think the whole venture of Israel is a startup venture. You can see this miracle around us today. It's not all theoretical. It affects our lives every day and I'll just give you an example," Ben-Shachar continued.

"Yesterday, I was chatting with my wife on Facebook, using instant messenger technology, which was developed here in Israel," he said. "I came here using Waze, which is a community-based navigation and GPS system that saves me dozens of hours every month. I parked using Pango, which is an app that allows me to park wherever I want without any difficulty…."

Ross asked some Tel Aviv residents why they live here and what the city means to them.

"The architecture is very nice. And the people are making the city what it is. It's the best city.  You can do whatever you want, whenever you want.  You have the beach of course that you can go.  I think the people are amazing, the most amazing," an enthusiastic Tel Avivan responded.

"Do you like the life here?" Ross asked a couple of ladies.

A second woman said she liked Tel Aviv "…because it's the most exciting city in Israel. Everything happens here, all the cafes. All the cultural activities are happening here.

"Tel Aviv it's the center of Israel, of business, of life, of families, of real estate of everything," a man named Hadar said.

"I think it's going to explode, not literally," he responded. "It is going to explode the amount of high-tech companies, the amount of innovations that are developed here – that are crucial to making the world a better place are going to come out of Tel Aviv and more research and more funding is going to come into this city and hopefully create a better future, not just for Jews, but for Christians, Muslims, Buddhists, around the world."