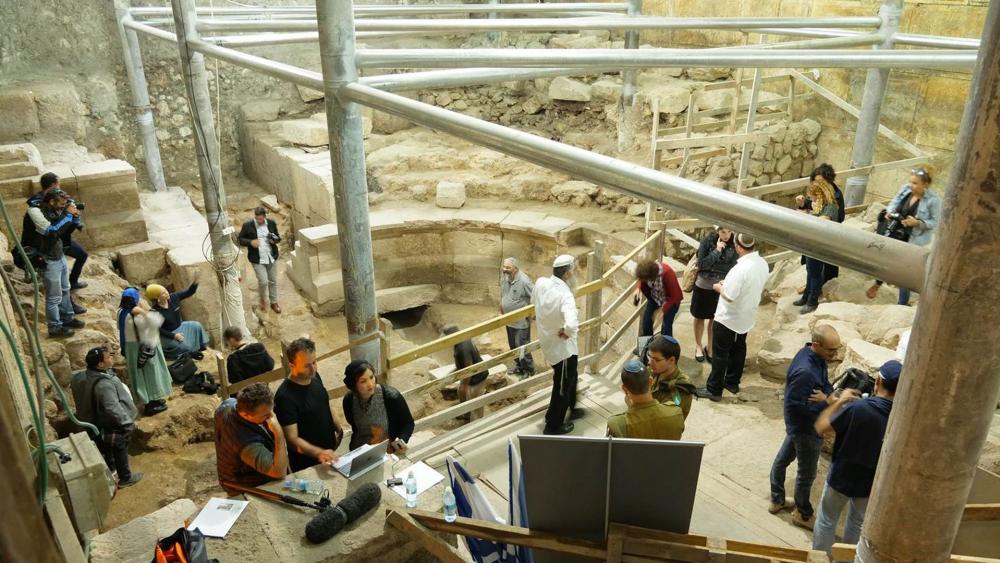 JERUSALEM, Israel – The Israel Antiquities Authority (IAA) unveiled a huge underground section of the Western Wall on Monday that had been hidden for nearly two thousand years and while digging, they also discovered a Roman-era surprise.

Two years ago, archaeologists began excavating under the section of the Western Wall known as Wilson's Arch hoping to determine its age. It leads to the indoor men's prayer section.

"We drilled down these beams to support the floor," IAA archaeologist Tehillah Lieberman told CBN News. "One of the main goals of the excavation was to not interrupt with the prayer activity going on."

Wilson's Arch is the only intact, visible structure remaining from the Temple Mount compound of the Second Temple period.

It was no surprise that archaeologists exposed eight new courses or rows of massive stones of the Western Wall that had been buried beneath it for 1,700 years.

"We knew it was here but to see it is very exciting," said Lieberman.

What they found under the street level there was a surprise.

"The most interesting thing that we found over here is a semi-circular building, or theatre-like building," said archaeologist Dr. Avi Salamon.

Salamon said it's the first time in 50 years of excavating in Jerusalem that archaeologists found a public Roman building like this.

"Therefore the importance of the excavation is enormous," Salamon told CBN News.

And it also confirmed historical writings that said there was a theatre near the Temple Mount.  But oddly enough archaeologists believe it was never used. Still it showed the change in character of the city.

"This shows us the change of the culture of the city from a Jewish city focusing on Temple Mount, Jerusalem changed into a Roman colony that has different needs, different uses – one of them is building entertainment, leisure buildings as this theatre-like structure," said Lieberman.

Lieberman says there's another drainage channel that connects Robinson's arch to the south to the City of David.

"It might even connect to that same drainage channel we know in Robinson's Arch and to City of David and if that's true you can probably walk from underneath the Western Wall plaza of today, the modern Western Wall plaza all the way to pool of Siloam," she said.

Archaeologists hope to open the site to the public in a few years.