JERUSALEM, Israel – A Kurdish pastor is issuing a wake-up call to Israel and the West: Turkey, not Iran, is Israel's biggest threat, and Turkey is aiming to take over Kurdish controlled areas of Iraq.

In a letter to CBN News detailing the Turkish-led siege on the Kurds in northern Syria, Pastor Majeed Mohammed, formerly with the Kurdsman Church in Erbil, says while Iran has not hidden its agenda against Israel, Turkey's Islamist President Recep Tayyip Erdogan is the bigger enemy.

Erdogan is preparing the way for the rebirth of the Islamic caliphate by rallying the 'Islamic brotherhood' to surround the Jewish state and destroy it. That eventuality would be pleasing to the Muslim world, Erdogan says.

Majeed, who is now living abroad, says there are many Christians in Afrin who are crying out for help.

The West, he pleads, must wake up to the Turkish siege against Afrin and other Kurdish cities in Syria and Iraq before he succeeds in extending the Shiite crescent along northern Iraq to the Mediterranean Sea.

Erdogan has mobilized radical Islamic militias to attack the Kurdish population in northern Syria. He is using Russian-manufactured tanks, airstrikes, and cluster bombs against civilians.

Majeed says thousands of mosques in and out of Turkey have joined Erdogan's call to wipe out the Kurds, while the West and the US have been largely silent.

Turkey's Islamist president has armed, trained and equipped these militias inside Syria, he writes, listing several by name and a description.

•    The Sultan Murad Brigade, which gets its full financial, logistical and military support from Turkey and is training fighters there and in Syria
•    The Hamza Squad, also trained in Turkey, which conquered Jarablus – a Syrian city on the western bank of the Euphrates River – last year
•    The al-Sham Legion, established in Syria in 2014, made up of 19 Islamic terror groups, including Suqoor al-Jabal Brigade
•     The Noor-aldeen movement, one of the most dangerous jihadist groups in Syria, was the first to begin slaughtering children

In the weekly sermons on Fridays – the Muslim day of prayer – mosques in Turkey, Sudan, Libya, Kuwait, Qatar, Egypt, Syria, and Lebanon, among others, have been asking Allah to prosper their new Sultan, Erdogan, and the caliphate he will head. According to Majeed, their prayer is based on a portion in the Koran.

•    Erdogan envisions himself as head of the "last caliphate of Islam" and is bent on redrawing the map of the Middle East. He's against stabilization in the region and sees his role as using jihadists to prove he is "the only one who understands, feels, acts, initiates and supports" the Middle East – not Russia, the United States or the international community.

•    Majeed believes Erdogan's lack of success (through NATO) of being a "European member" has refocused him on extending his power throughout the Middle East. The Kurds are the only "stumbling stone" to achieving his goal. By accusing them of being infidels and attacking them, he's justifying his own aggression and providing a path to mobilize Islamic militias everywhere to unite against the Kurds. The fact that some of these militias have been trained by international allies and are members of the international coalition complicates the situation even further, he explains.

"How does the United States permit such violence against an ally who stood and fought beside US soldiers shoulder to shoulder and respected what the Americans suggested on the ground in Syria?" he asks.

Middle East expert Jonathan Spyer agrees that the implications of a Turkish takeover in Afrin "are quite grave."

"The Kurds are fighting very hard, but probably in the course of the coming days and weeks, the Turks will push forward and the implications of it are quite grave," Spyer told CBN News.

"I mean there's a large Kurdish population in there. The Turks are operating with some pretty dangerous Salafi jihadi Islamist fighters, Syrian rebel fighters on the ground in cooperation with them. There's been aerial bombings on civilians, there's been a number of civilians killed," Spyer said.

"The implications are bad from a humanitarian point of view. From a political point of view they're quite grave as well," he said.

"Let's remember that the Syrian Kurds are currently partners of the United States in Syria. You know they're the people who fought ISIS together with US air power, special forces over the last two years successfully. And there are towns further east where US personnel are present in cooperation with them. And the Turks have named those towns as places they want to conquer too and have warned the Americans to get their forces out of those areas," he added.

"So the potential for at least a clash of words and maybe even something worse between the US and its so-called NATO ally, the Republic of Turkey, are becoming more and more real by the day," Spyer concluded.

Majeed says the silence of the free world has spurred Erdogan on to try every way to conquer Afrin. They have barbarically murdered anyone they've captured, bombed hospitals and schools, while snipers target the innocent – old and young alike, shouting Allahu Akbar (Allah is greater than all).

"Erdogan is that man who must be stopped and judged for his tremendous crimes against humanity in [and] outside Turkey as soon as possible," he concludes. 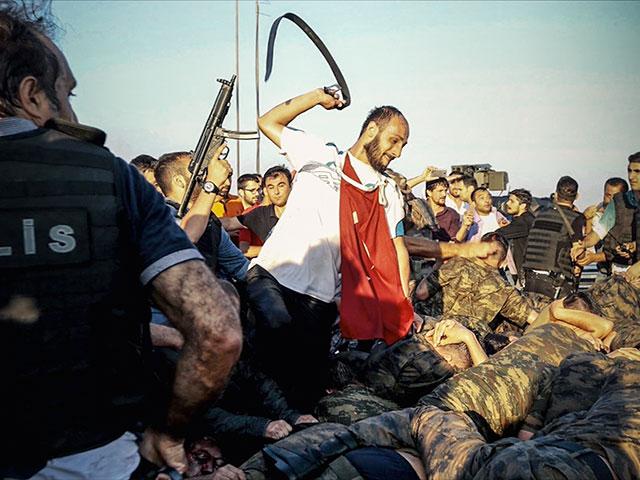