Since 1776: The Amazing Tie Between Ancient Israel and America's Founding Fathers 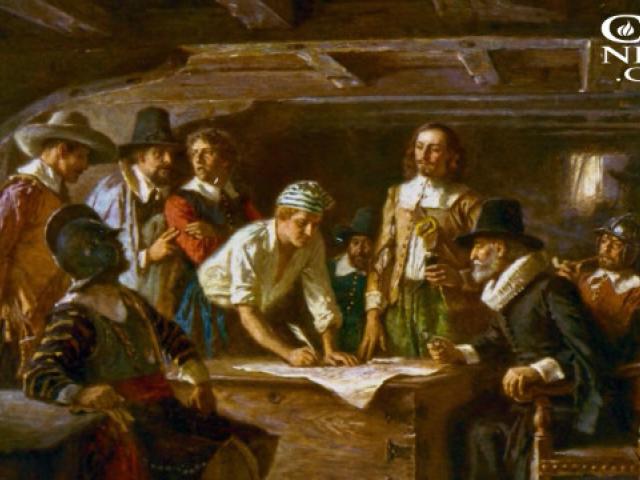 Since 1776: The Amazing Tie Between Ancient Israel and America's Founding Fathers

America is known for being a strong supporter and ally of the nation of Israel. With President Donald Trump's recent decision to move the American embassy to Jerusalem, that friendship doesn't seem to be weakening any time soon.

However, many people don't realize that America's love for the Jewish people and their values started long before 1948 when Israel was established as a modern state.

The Tikvah Fund, an organization that seeks to highlight Jewish leaders in the United States, is on a mission to teach the world about the deep relationship between America's founding fathers and the Jewish ideas that helped shape the nation. The Tikvah Fund has created an online course that details the powerful Jewish ideas and people who inspired, supported, and prayed for the American founders.

"The Hebrew Bible lies at the center of the American imagination and it is one of the central inspirations for the founders," Rabbi Meir Soloveichik, who teaches the course, told CBN News.

Rabbi Soloveichik is a professor at Yeshiva University and leads Shearith Israel, the oldest Jewish congregation in America. He argues in the course that the American Revolutionists strongly identified with ancient Israel in their quest for God-given freedom.

"On July 4th, after the American Declaration of Independence was approved and Benjamin Franklin and John Adams and Thomas Jefferson form a committee to decide what the seal of the United States will actually be. The first suggestion that Benjamin Franklin makes once this committee gets going is the seal of the United States should be Moses and Pharaoh at the sea with the motto that 'Rebellion to Tyrants is Obedience to God.'" Soloveichik explained.  "So, when Franklin is asked, 'what stories should emphasize or embody what we are trying to do here?' The first place his mind goes is Exodus."

However, the founding fathers weren't just inspired by Jewish scriptures. They were guided by powerful Jewish men and women.

One of those men was a Jew named Jonas Philips.

"Jonas Philips is a man I refer to as the most important American Jew you've never heard of," Soloveichik said.

Philips is one of the first "American success" stories. Brought to America as an indentured servant, Philips eventually bought his freedom and becomes one of the most prominent Jews in the new nation.

"He becomes an American patriot and he serves in the Revolution and then emerges from the war with great economic success," Soloveichik noted.

While Phillips had gained economic success, he lacked religious freedom.  In his state of Pennsylvania, those who wanted to serve in the state legislature had to take an oath of faith, saying they believe in the truth of the New and Old Testaments. This was an oath Philips could not take as a Jew. So, in 1787, he wrote a letter to the Constitutional Convention asking that religious liberty for all Americans would be protected.

Washington and the rest of the convention got the message loud and clear.
"The Constitutional Convention, not necessarily because of his letter, concluded with a document that really for the first time bans religious tests for office," Soloveichik said.

In the lecture series, the rabbi also describes how Philips family earned the founding father's trust and even helped preserve their legacy.

Benjamin Rush attended his daughter's wedding, his grandson become a naval war hero who bought and preserved Monticello, Thomas Jefferson's estate, and his great-grandson served as governor of South Carolina.

While the founders borrowed many ideas from the Hebrew Bible and Jews like the Philips, one of the biggest connections between ancient Israel and America is the fact that both nations share a covenant with God himself.

"The Declaration of Independence in its own way is a covenant because it proclaims a great idea - 'all men are created equal.' But it also concludes with God being the glue that holds those who created this contract together," Soloveichik explained. "The Declaration becomes an intergeneration covenant for America so that America becomes the first generation since Biblical Israel to be founded with a covenant.

It is this covenant that Rabbi Soloveichik believes binds Jews and Christians together as Americans. He believes the many other lessons people will learn through the course will be bring understanding and unity.