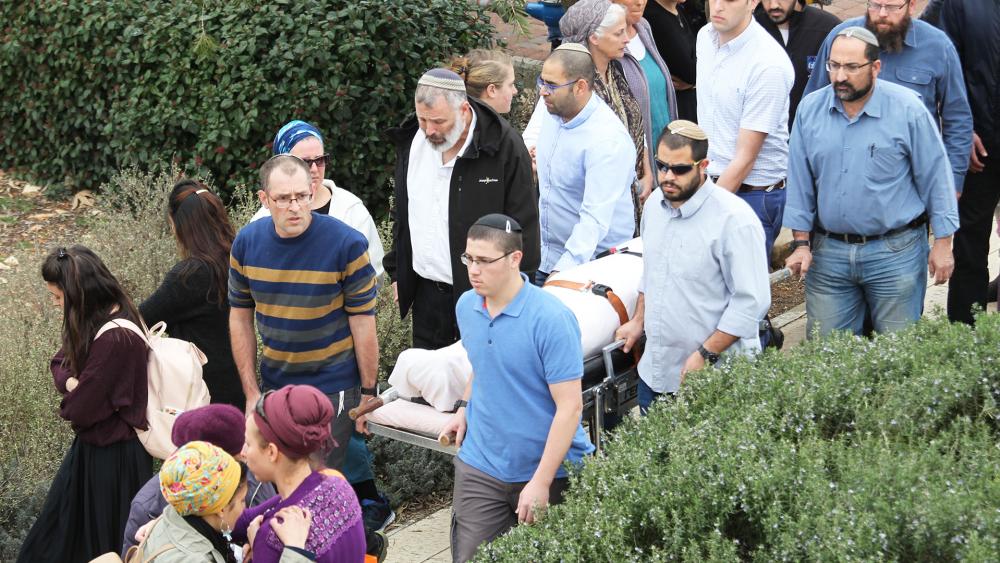 JERUSALEM, Israel – The 29-year-old rabbi and father of four who was stabbed to death in a violent terror attack Monday afternoon was laid to rest Tuesday morning. The attack, which occurred at a bus stop just outside the Israeli city of Ariel in Samaria, was the second murder of a rabbi in a month.

Thousands of mourners gathered in the Jewish community of Har Bracha to attend the funeral of Rabbi Itamar Ben Gal.

Israeli security forces launched a massive search for the attacker after identifying him from the contents of his backpack as Abed al-Karim Adel Assi, 19, an Israeli Arab resident of Jaffa. According to Israeli media, Assi's father was from the Palestinian Authority-controlled city of Nablus (biblical Shechem) and his mother from Haifa.

The Jewish community of Har Bracha lies in the disputed territory of biblical Judea and Samaria, also known as the West Bank. The regional head of the Samarian Council called on Israeli Prime Minister Benjamin Netanyahu to transform Har Bracha into a city. He said that would be the appropriate response to the murder.

Ben Gal became the second murder victim within a month. On January 9, a Palestinian terror cell murdered Rabbi Raziel Shevach, a husband and father of six, in a drive-by shooting near the community of Havat Gilad. In response to that killing, the Israeli cabinet authorized the creation of a new community in Samaria.

"During the attempt to arrest him, the terrorist emerged armed from the structure in which he was hiding and was shot by the security forces. An M-16 and a pack with explosives were discovered on his person," Israel's Foreign Ministry said in a statement on its website.

The Palestinian Fatah faction called Ahmed Jarar a "martyr" and a "young lion." After the attack, they said a "settler" had been killed. They posted a picture of Jarar, along with his father, who was killed 16 years ago by Israeli security forces after planning two unsuccessful terror attacks: a suicide bombing in a hospital a truck bombing. Fatah also posted a video of Monday's attack and called it an "operation."

Surveillance footage of Monday's attack shows Rabbi Ben Gal waiting at the bus stop. The terrorist exits a passenger van, crosses two lanes of traffic, and attacks him from behind.

Doctors at Bellison Hospital in Petah Tikveh were unable to save the rabbi's life.

Meanwhile, YNet news reported that in 2016, Assi spent several months at the Tel Aviv branch of the Shanti House for Underprivileged Youth. His Israeli identity card allowed him to travel freely throughout the country, but some staff members at the home were concerned about his frequent visits to Nablus where his father lives.

According to reports, Assi was a troubled youth who struggled with drug abuse. His mother said he was taken away from her when he was just 40 days old and she didn't see him again until he was 16.

The Jerusalem Post reported that when he left Shanti House, he applied for assistance elsewhere, but his social media posts reveal an Arab youth struggling with the Islamic concept of shahid (martyr), an honor often applied to youths killed while attempting to kill an infidel – a non-Muslim, which most of the time in Israel means Jews.

From that point on, his Facebook posts, which are no longer available, became increasingly anti-Israel. Translations of his Arabic-language posts include such phrases as "Zionists disappear" and "Zionists burn." According to the Post, he even added comments in Hebrew cursing Israelis.

His mother condemned what her son had done and called on him to turn himself in.

Prime Minister Benjamin Netanyahu promised he would be found and brought to justice. President Rivlin sent condolences via a tweet.

"We all send comfort and strength to his widow, his four young children, his family and his students, who will never forget him."

"The Palestinian leadership must be held accountable for today's horrific murder in Israel," Danon said in a statement on Monday. "This terror attack is the direct result of incitement and payments to terrorists by the Palestinian Authority."

Ben Gal was laid to rest Tuesday morning at the Har Bracha cemetery.