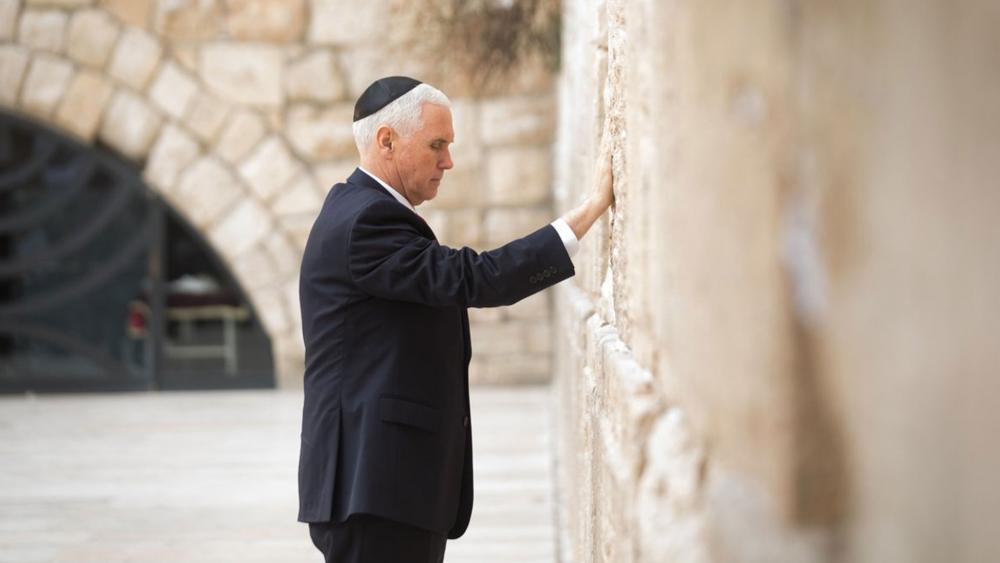 JERUSALEM, Israel – During his second full day in Israel, US Vice President Mike Pence visited two of Jerusalem's most revered sites: the Holocaust museum and the Western Wall. He's also receiving high praise for his Knesset speech on Monday that warmed the hearts of many Israelis. The first official stop Tuesday for the vice president was the Jerusalem residence of Israeli President Reuven Rivlin, where he repeated the White House plan to move the US Embassy to Jerusalem by the end of next year. Tuesday Pence tweeted: "I truly believe that in making the decision to recognize Jerusalem as the capital of Israel, PEACE is now MORE POSSIBLE, not less possible. #VPinIsrael"

In his meeting with Rivlin, Pence also put Europe on notice that changes are coming to the nuclear deal with Iran.

"We are sending a signal to our European allies that the time has come for changes in the Iran nuclear deal that will ensure that the sunset provisions in the deal are completely eliminated and that punitive sanctions will be available for many years to come to prevent Iran from obtaining a nuclear weapon. And you have our commitment to work closely with our allies around the world to achieve that," he said.

On all his stops, Pence enhanced his reputation as a friend of Israel.

An honor to speak before the Knesset in Jerusalem. @POTUS kept his word when he announced the United States will finally acknowledge Jerusalem is Israel’s capital. Thanks to the Trump Admin’s leadership, the alliance between Israel & the U.S has never been STRONGER. #VPinIsrael pic.twitter.com/bvbaphLGjU

He gracefully handled Monday's protest by Arab lawmakers in the Knesset and his speech drew praise both in the media and from Prime Minister Benjamin Netanyahu.

Observers here note that the Pence visit seems to be a personal pilgrimage as much as a political tour. That was most evident at Yad VaShem, the Israeli Holocaust museum. A privilege to pray at the Western Wall. This is our 4th trip to the Holy Land, but Karen & I never fail to leave without a sense our faith has been renewed - our faith in God, but also our faith in the people of Israel & their commitment to freedom, security & peace. #VPinIsrael pic.twitter.com/DbujemM0fO

The vice president concluded his trip with a visit – with prayers – at the Western Wall, adjacent to the Temple Mount, perhaps a fitting end to a trip designed as a search for the threads of peace in the Holy City and the Middle East.

PRESIDENT RIVLIN:  Welcome, Vice President.  You a dear -- a dear friend to the Jewish people and to the State of Israel.  We are very proud, and I would like to thank you about your speech yesterday, about the strong, the warm, and the very special word that you used yesterday in our shrine of democracy, in our parliament, in our Knesset -- Jerusalem, the capital of the State of Israel.

You are very proud, always, to stand very firm behind your words, in words and in action.  And for that, we have only one word to describe you:  You are a mensch.  (Laughter.)  Now, in America, probably they know what is the meaning of mensch.  But for those people in Israel who doesn’t know American, or Yiddish, I would say, a mensch is a real human being.  (Speaks Hebrew.)  And we are very proud to have you along with us.

But we are so very proud as Jerusalemites about the decision of President Trump, about recognizing Jerusalem as the capital of Israel.

You have to know, my tutor, former Prime Minister Menachem Begin at the time had said the obvious should be said from time to time, even be written down.  And the obvious was said, and we appreciated very much.  And we see it as a real gift for the 70th anniversary of the state of Israel.

In spite of the words that President Abbas have used only last week, I must say that we have to continue in order to find a way to build confidence between the two people.

Unfortunately, there is no confidence.  The less confidence that we have brings us to leave -- as we leave without the ability to find a way in order to get to any kind of understanding that we are not doomed to live together; it is our destiny.  But they have to understand that the Jewish people have returned back to the homeland, not as compensation because of the Holocaust, but we have returned back to our land only because it is our fatherland.  That was the reason why my family came here 200 years ago.

We welcome you once again.  And we appreciate very much what you are doing for the Jewish people and what you have done until now, and we know what you can do -- and you will do -- in the future.

Welcome, Mr. Vice President.  It is a real pressure to have you with us.

VICE PRESIDENT PENCE:  Thank you, President Rivlin.  Thank you for the warm welcome on your part, on the part of the First Lady.  We are honored to be with you today at the home of the President of Israel.  And it is deeply meaningful for me to be able to be with you, here in Jerusalem, the capital of the State of Israel.

It was my great honor yesterday to be afforded the opportunity to be the first Vice President of the United States to address the Knesset.  And I want to thank you personally for your attendance at my remarks, and I thank you for your gracious words.

Let me say that President Trump's decision to recognize Jerusalem as Israel's capital we hope is the clearest sign yet of the unwavering commitment of the United States of America to Israel.  As I announced yesterday, Mr. President, President Trump has directed our State Department, working with Ambassador Friedman, to complete the transition of moving our embassy here, to Jerusalem, by the end of next year.  And we look forward to that as a tangible sign of our enduring commitment and alliance to the State of Israel and to the people of this great nation.

The bond between us, we believe, has never been stronger.  But under President Trump's leadership, we are committed to make it stronger still.  We have ties through our deep commitment to freedom, shared values, but also through commerce.  More than $45 billion in trade takes place between the United States, supporting jobs in our country and yours.  And our security collaboration has never been more robust.

We stand shoulder-to-shoulder with you in the battle against radical Islamic terrorism.  And I thank you, Mr. President, for your government's courage, for the courage of your military.  And I pledge to you a continued collaboration and cooperation on behalf of our mutual security.

We also stand together against the threat of the leading state sponsor of terror, Iran.  And just know that, in President Trump's recent decision to announce that the waiver that he would sign on sanctions, under the Iran nuclear deal, would be the last one.  We are sending a signal to our European allies that the time has come for changes in the Iran nuclear deal; that we'll ensure that the sunset provisions in the deal are completely eliminated, and that punitive sanctions will be available for many years to come to prevent Iran from obtaining a nuclear weapon.

And you have our commitment to work closely with our allies around the world to achieve that.  If our allies will not join us, President Trump has made it clear that we will withdraw from the Iran nuclear deal immediately.  But we hope -- we hope in the months ahead to be able to strengthen it, to contribute to the security of the region, Israel's security, and the security of American interests as well.

All of that said, the President also sent me here to reiterate our nation's deep commitment to peace.  And I'm very moved by your reflections, since I first arrived, about what Jerusalem means to peace and the way that people of the three great faiths of the world here have lived together in harmony for generations.  And President Trump truly believes that the decision the United States has made to recognize Jerusalem as the capital of Israel, we believe will set the table for the opportunity to move forward in meaningful negotiations to achieve a lasting peace, and end the decades-long conflict that has beset.

VICE PRESIDENT PENCE:  Indeed.  And so let me thank you again for your warm hospitality.  We are grateful for your leadership and for your friendship.  And I look forward to our discussion to explore ways that we can make the ties that bind America and Israel even stronger. 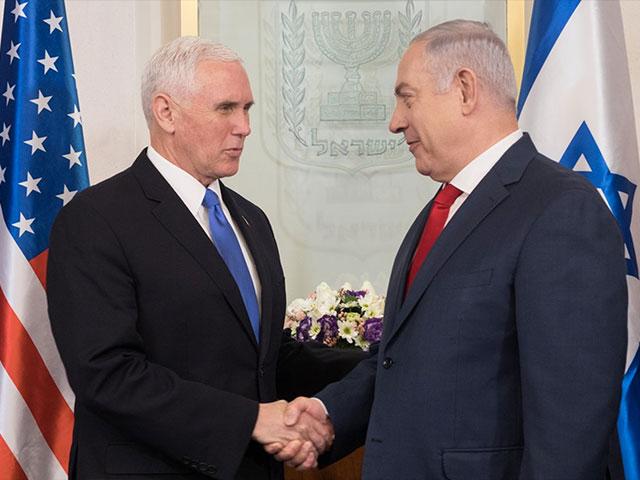 Pence Praises 'the Miracle of Israel,' Pledging to Open US Embassy in Jerusalem in 2019
CBN News Email Updates