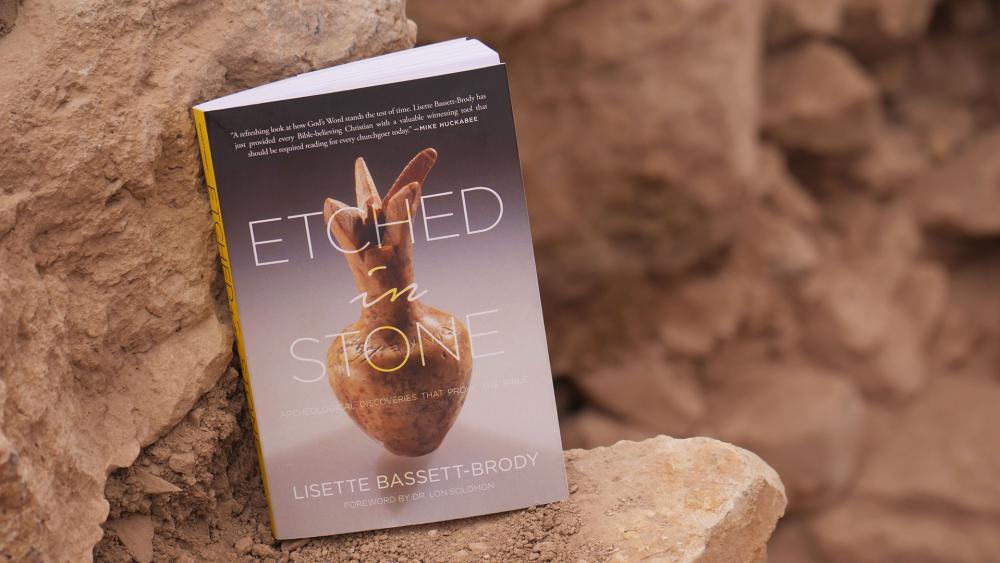 JERUSALEM, Israel – Israel is home to some of the world's greatest archaeological treasures and scientists often link their direct finds to the Bible. Now you can make those same connections in a new book that provides an easy guide to match ancient artifacts with scripture.

During a trip to the Holy Land, Lisette Bassett-Brody, wife of CBN News' own David Brody, visited the Israel Museum in Jerusalem.

She found artifacts, but when she looked for a catalogue of these biblical treasures there were none to be found. So she decided to write one.

Her decision and years of hard work led to her book, "Etched in Stone: Archaeological Discoveries that Prove the Bible."

"This is not a book on archaeology," she told CBN News. "It really is more about the Bible and just a little bit about archaeology – just to show that the stories within the pages of the Bible are historical and factual."

Bassett-Brody says even Bible believers may not know what's been discovered in Israel.

"I don't think that a lot of Christians realize how much physical evidence there is to support the scriptures," she said.

One famous piece – or more accurately thousands of pieces of evidence – are the Dead Sea Scrolls, housed at the Israel Museum in Jerusalem. Discovered 70 years ago, the scrolls revealed a treasure written more than 2,000 years ago.

"When something is not supported through archaeology, critics will jump on it as fast as possible and say, see there's no evidence, the story is not true and the Bible is wrong," she explained. "What the Dead Sea scrolls showed us is that our copy [of the Book of Isaiah] today is almost exactly identical. There are some word changes but they're not significant … what was so exciting is that it proves we can trust the version that we have today because it's so close to what was there thousands of years ago."

The book includes sections for easy reference to people, places and things.

For example, the reader can find familiar names from King David to Pontius Pilate and places throughout Israel and the Middle East, as well as structures like Hezekiah's Tunnel and the Walls of Jericho.

The author also connects artifacts to key events such as the making of the golden calf, David slaying Goliath and the crucifixion of Jesus.

"Within each section, it's alphabetized and I wanted to have everything very accessible, very easy to find while flipping through," she said. "So even with each artifact there's an information block that tells where the artifact was found, who found it, when did they find it and what exactly it is."

It also answers questions like these: Did the Israelites really make bricks without straw? Was Jericho really destroyed when the city's walls fell down?  And was crucifixion a means of capital punishment?

"For example, when the Bible talks about David killing a giant named Goliath and people read that he got five smooth stones, they probably think of pebbles. Okay, how can you kill a giant with a pebble?

"But in reality, they dug all over the country and found that what he used was a fairly common military weapon, a sling and a stone. The stone were sometimes as large as a tennis ball. And they could be thrown 400 yards at 60 miles an hour. So once someone realizes how dangerous these weapons can be you can understand how he was able to kill lions and bears and Goliath."

In all, the book provides 70 discoveries that document the historical accuracy of the scriptures.

"They did not happen in a vacuum and they're not made up and the way we know this is because we have physical proof and we can thank archaeology for that," she said.

Two archaeologists who discovered such physical proof are Eilat Mazar and Gaby Barkay. Mazar found the seal of King Hezekiah mentioned in the Hebrew scriptures.

"This is unparalleled, unheard of to come as close as you can imagine to a biblical figure, not to mention such a king as King Hezekiah," Mazar told CBN News. "So to find his seal impression, it's almost touching him."

Barkay uncovered tiles and coins from the Second Temple Period described in the New Testament.

"It's almost that Israel brings the Bible to life and I think that's partly what makes Israel so special," Bassett-Brody said. "When it talks about David being in the wilderness and you see what the wilderness looks like there, that narrative makes much more sense."

Bassett-Brody feels it's a great witnessing tool both for doubting Christians and skeptics.

"Because so many times you know when we talk about the Bible it's so abstract to many people.  But when any time you have physical proof it's going to support what you're saying," she said. "And archaeology is the same way, now that there is physical evidence, I think it makes the best witnessing tool of all. Because you can't really question something that's sitting right in front of you, you can see with your own eyes."

She also hopes the book brings the Bible to life.

"So that was one of my goals that any age could pick it up, read it and understand it and learn something and not only just for Christians, but also for seekers or even non-believers," Bassett-Brody explained. "[I] feel like if they read this book or even parts of the book they're going to walk away with something, having learned something about the Bible, about God, about Jesus and I think it's going to obviously for Christians strengthen their faith and hopefully for non-Christians give them something to think about at least."