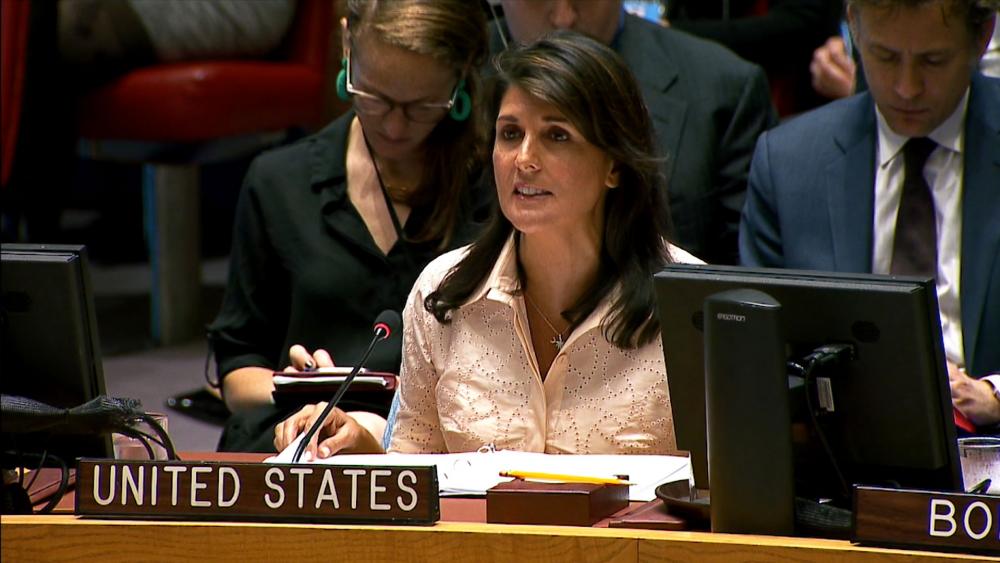 Secretary of State Mike Pompeo and US Ambassador to the United Nations Nikki Haley announced Tuesday that the US will leave the UN Human Rights Council. Click the player to watch.

WASHINGTON – With Secretary of State Mike Pompeo standing alongside, US Ambassador to the UN Nikki Haley announced the United States is withdrawing from the UN Human Rights Council, calling it "an organization that is not worthy of its name."

The announcement came in a televised address Tuesday afternoon.

Haley is President Donald Trump's envoy to the United Nations. She says a year ago she made clear the US would stay in the council only if "essential reforms were achieved."

She says it's clear those calls for change were not heeded.

Haley deplores the fact that the council's membership includes accused human rights abusers such as China, Cuba, Venezuela and the Democratic Republic of Congo. She says the council also has a "chronic bias against Israel."

“We take this step because our commitment does not allow us to remain a part of a hypocritical and self-serving organization that makes a mockery of human rights,” Haley said.

Secretary of State Mike Pompeo, appearing alongside Haley at the State Department, said there was no doubt that the council once had a “noble vision.”

But today we need to be honest,” Pompeo said. “The Human Rights Council is a poor defender of human rights.”

However, Haley says that if the council does reform, the United States "would be happy to rejoin."

She said the withdrawal notwithstanding, the US would continue to defend human rights at the United Nations.

The 47-member body, which meets three times a year, opened the second of its three-week annual sessions Monday.

The council's latest proposal calls for an investigation of Israel's alleged use of excessive force during demonstrations along the border with the Gaza Strip. More than 100 Gazans died during several weeks of protests this spring after Hamas and other radical groups orchestrated attempts to charge the border with Israel despite repeated warnings by Israeli security officials.

Since March 30 when Hamas began its "Great March of Return," demonstrators have set fire to more than 6,000 acres (25,000 dunams) of wheat fields, orchards and national parks using "incendiary kites."

One of dozens of fires in southern Israel, Photo, CBN News, Jonathan Goff

Israeli soldiers have thwarted most attempts to cut the fence and infiltrate Israel though not all. The IDF has also destroyed several cross-border tunnels, even an underwater tunnel that wound through Egypt to Israel's coast.

The United States and Australia were the only two council members voting against the proposal.

More than a year ago, US UN Ambassador Nikki Haley spoke of that eventuality at the Israeli American Council's annual conference in Washington, DC.

She also traveled to Geneva last year to address the Human Rights Council. She called the 47-member body a "forum for politics, hypocrisy and evasion," which denounces Israel at every opportunity while ignoring human rights abuses in other countries.

While in Switzerland, Haley also addressed the Graduate Institute of Geneva, noting that since its inception in 2006, the UNHRC had passed 70 resolutions against Israel, compared with seven against Iran.

"This relentless, pathological campaign against a country that actually has a strong human rights record makes a mockery not of Israel, but of the council itself," she said.

Haley also admonished the UNHRC "to keep the worst human rights abusers from obtaining seats on the council."

According to The Associated Press, the United States has opted to stay out of the Human Rights Council before: The George W. Bush administration opted against seeking membership when the council was created in 2006. The U.S. joined the body only in 2009 under President Barack Obama.

The Associated Press contributed to this story.