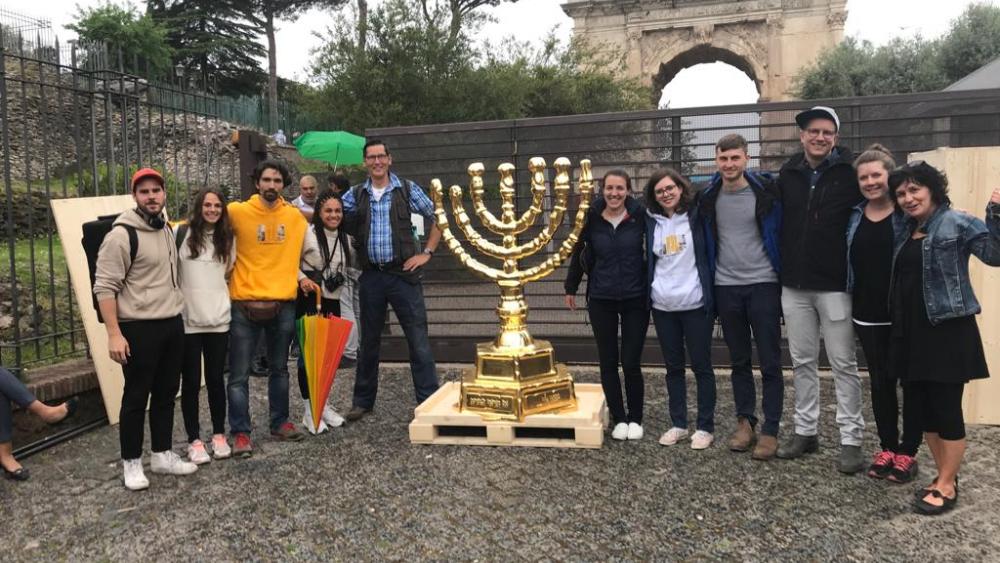 JERUSALEM, Israel – A group of German Christians who call themselves "The Menorah Project"  brought a life-size replica of the seven-branched menorah that once stood in the second Temple before it was destroyed by the Romans in 70 AD back to Jerusalem.

The 5-foot, 265-pound gold-coated menorah is a peace offering and plea for reconciliation to the Jewish people.

"We are finally here. The arrival and unveiling of the Menorah. This journey has been unbelievable," the group said in a Facebook post.

This group of 11 Christians brought the menorah replica to Jerusalem, where the original was once stolen by the Romans, to seek forgiveness for the Church's long history of anti-Semitism and violent persecution of Jews.

The group views the Romans' robbery of the Menorah as the beginning of the early church's severance from its*Jewish roots. This, they believe, ultimately led to the development of Replacement Theology, the belief that God has rejected the Jewish people and replaced Israel with the Church. This theology is credited with being one of the root causes of anti-Semitism in Christianity and even the Holocaust.

"The church never returned the holy instruments back to the Jewish people," the group says in a German to English translation on their website. "Instead, the church saw itself as the new spiritual Israel….We want to set a statement. We want to accept our failures as a church as set a sign of return."

The menorah traveled from Germany by boat through Rome to Israel's port in Haifa. It arrived this week and was presented to Israeli citizens on May 9 at a ceremony in Jerusalem.

The menorah arrived at a time when Israel stopped to remember the horrors of the Holocaust and the rebirth of their nation.

"As a group of young Christians, we accompany the Menorah on (its) way from Rome to God's eternal city of Jerusalem to deliver (it) to the Jewish people in the context of the Jewish State Day of Mourning Yom HaShoah and Israeli Independence Day Yom HaAtzmaut," the group said.

"With the return of the (Menorah) our thanks and our love for the Jewish people, together with the request for forgiveness, should be expressed. A sign that perhaps speaks louder and means more than many words," they continue.

They see the return of the menorah as a symbol of God restoring Israel.

"The Menorah is a symbol of hope that the Jewish people will be given back, what has been stolen from them all these years, and that God is putting together the pieces we are bringing back."