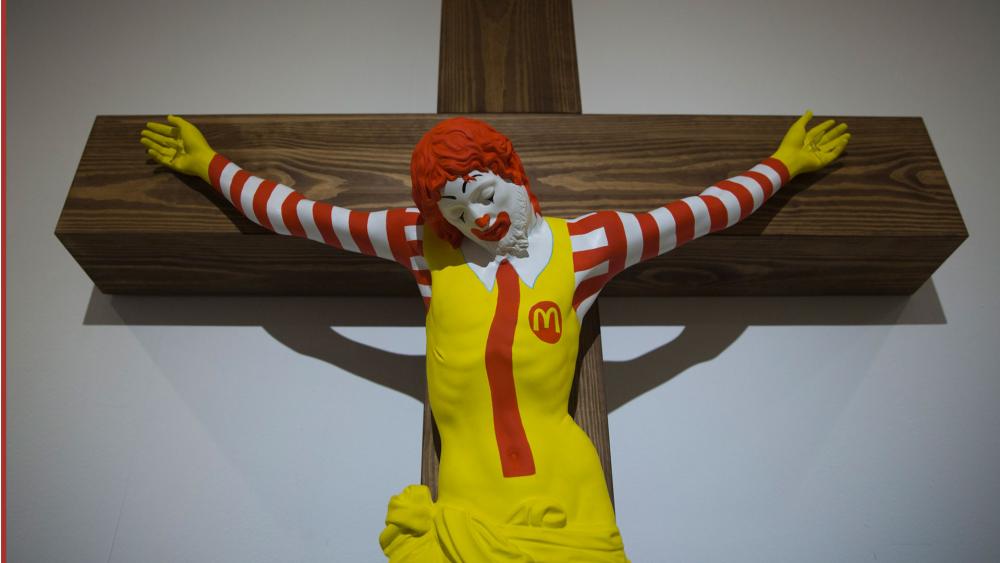 A sculpture of "McJesus" — Ronald McDonald nailed to the cross — sparked outrage among Israel's Christian Arab community in Haifa.

The sculpture has been on display in the Haifa Museum of Art for months. Some Christians have called the artwork offensive and called for its removal.

Police say hundreds of Christians demonstrated outside the museum last week. Some even attempted to enter the building to take the sculpture down.

The protest turned violent when some people in the crowd hurled rocks at authorities.

Three police officers were injured by the rocks.

One protestor told Walla News the Israeli government ignored calls to remove the statue because the complaints were coming from Christians.

"If they put up [a sculpture of] Hitler with a Torah scroll they would immediately respond," he told the Walla news site.

"Disrespect of religious symbols sacred to many worshipers in the world as an act of artistic protest is illegitimate and cannot serve as art at a cultural institution supported by state funds," she wrote in a letter.

It turns out Christians aren't the only ones who want the sculpture removed.

The artist who created it, Jani Leinonen, does not want his artwork displayed in Israel because he supports boycotts, divestments, and sanctions against the Jewish State.

"Israel overtly uses culture as a form of propaganda to whitewash or justify its regime of occupation, settler-colonialism and apartheid over the Palestinian people," he told The Jerusalem Post in explaining his removal request.

The museum said it borrowed the work from a gallery in Finland and had not received a request to remove it.