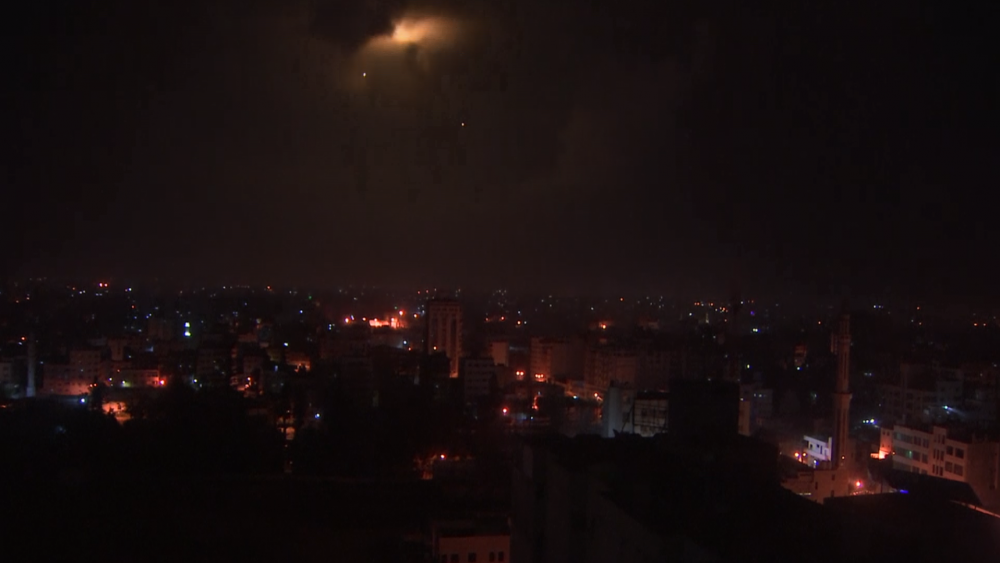 JERUSALEM, Israel - Israeli fighter jets and other aircraft hit more than 100 military targets inside Hamas-controlled Gaza overnight.  The strikes were a response to terrorist rocket attacks that targeted southern Israel and as far away as Tel Aviv.

The Israel Defense Forces confirmed that IDF warplanes hit a Hamas terror headquarters, an underground rocket manufacturing site, and an unmanned aerial aircraft center in Gaza. There were no reported casualties.

Terrorists in Gaza responded to Israel's air raids by launching even more rockets into southern Israel on Friday morning.

We hit 100 Hamas military targets in Gaza in response to the rockets they fired at Israeli civilians. Among them:
• Underground rocket manufacturing site
• HQ responsible for orchestrating Hamas terrorism in Judea & Samaria
• Hamas center of unmanned aerial aircraft#StopHamas pic.twitter.com/Iy3DwpNpTU

Imagine this over #NYC what response would be demanded of the US government if Mexico or Russia was firing explosives into densely populated cities? #IStandWithIsrael #IsraelUnderFire #israel #IDF #gaza pic.twitter.com/GXm0HWICBQ

Israel's Channel 10 reported the rockets were Iranian made.  After the rocket attacks, Prime Minister Benjamin Netanyahu met with security officials at the defense ministry in Tel Aviv to discuss a response.

According to the IDF, the Iron Dome System was activated but did not intercept the weapons. Instead, the rockets fell and detonated in open territory.

Brig. Gen. Ronen Manelis, the chief Israeli military spokesman, said the IDF had been caught off guard by Thursday night's rocket attack and had no advance intelligence.

Hamas denied responsibility for the attack, but after an investigation, Israel concluded the terror group was responsible.

The late-night attack on Israel's commercial capital signals a dangerous escalation of conflict between the Jewish state and the terror organization. The last time Tel Aviv was targeted was in the 2014 war between Israel and Hamas.

The terror group and Israel have fought three wars since Hamas took control of the Gaza Strip in 2007.  Whether this situation will escalate is unclear.

The fighting comes at a sensitive time for Israel. The country is just weeks away from its national elections on April 9. Netanyahu warned Hamas not to take advantage of the timing and assured the terror group Israel will respond to attacks with harsh military action.

"We will do anything necessary to restore security and quiet to the area adjacent to the Gaza Strip and to the south in general," he told his cabinet.

Meanwhile, tensions flared Thursday between Hamas and the Palestinians civilians.

Hamas, the terrorist org that occupies Gaza since 2007, has opened fire on hundreds of Palestinians who protested today against its responsibility for their miserable lives.

Hamas attacked a group of Gazans who were protesting the harsh conditions on the strip. Hamas' corruption combined with an Israeli-Egyptian blockade and sanctions by the rival Palestinian Authority have crippled Gaza's economy.

Hamas' violent clash with protestors suggests residents have little desire for another war with Israel.