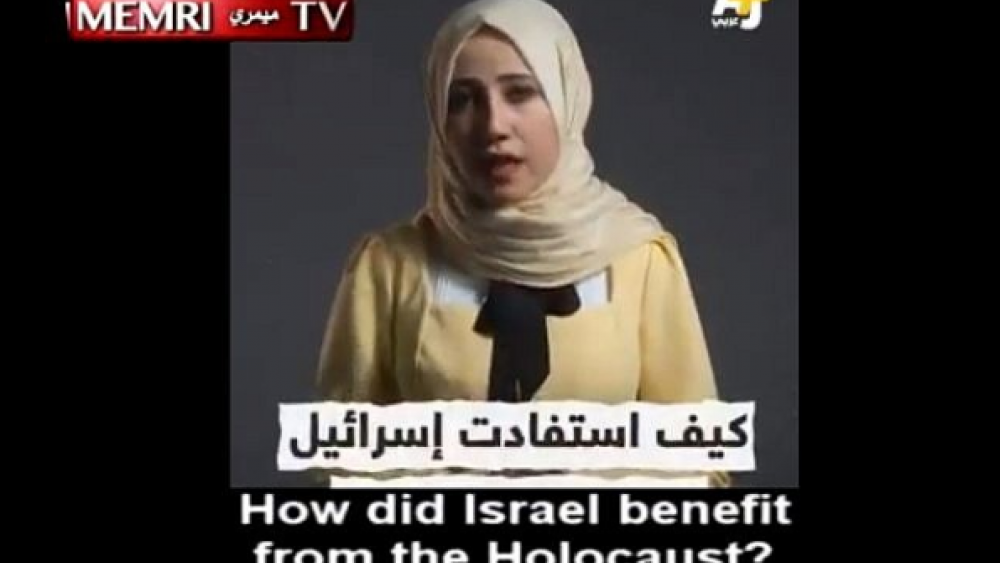 The Qatar-based Al Jazeera media network issued an apology and suspended two journalists Sunday after the network posted a video claiming that Zionists exploited the Holocaust to found the State of Israel.

The video, which argued that "the Zionist movement benefited from" the Holocaust, drew immediate outrage on social media. The video and all accompanying posts were removed by the network.

"Al Jazeera stated today, that it has taken disciplinary action and suspended two of its journalists over video content produced on the Holocaust. The video content and accompanying posts were swiftly deleted by AJ+ senior management from all AJ+ pages and accounts on social media, as it contravened the Network's editorial standards," Al Jazeera said in a statement.

Dr. Yaser Bishr, Executive Director of Digital Division, stated that Al Jazeera completely disowns the offensive content in question and reiterated that Al Jazeera would not tolerate such material on any of the Network's platforms. In an email to staff he also called for the mandatory bias training and awareness program.

The controversial video was promoted in Arabic and questioned Holocaust history and compared Zionism to Nazi ideology.

"Israel is the biggest winner from the Holocaust and it uses the same Nazi justifications as a launching pad for the racial cleansing and annihilation of the Palestinians," journalist Muna Hawwa said in the video.

Hawwa later posted the video to Twitter with a caption in Arabic saying:

"My new story.. tell the story of the holocaust. DID HITLER KILL 6 million Jews? And how did the Israeli occupation benefit from extermination? And did hitler cooperate with the Zionist movement? And why can't I guarantee the Palestinians to condemn the tragedy?"

This is the true face of Qatar's Al Jazeera. Unabashed Holocaust revisionism and anti-Semitism on its Arabic channel.

"This AJ+ 'explanation' of the Holocaust is the worst kind of pernicious evil," the Foreign Ministry tweeted. "That's how Al Jazeera brainwashes young people in the Arab world and perpetuates hatred of Israel and the Jews."

This @ajplusarabi "explanation " of the Holocaust is the worst kind of pernicious evil. That's how @AlJazeera brainwashes young people in the Arab world and perpetuates hatred of Israel and the Jews. Lies and evil propagated by the ideological descendants of " Der Stürmer". https://t.co/8mqRINZP2i

Left: A translation of what AlJazeera tells its Arabic viewers.

Right: How AlJazeera presents itself to the English speaking world. pic.twitter.com/5PT83a8Gap

The Times of Israel reports that Israeli Prime Minister Benjamin Netanyahu threatened to close the local offices of Al Jazeera in 2017 after accusing the broadcaster of incitement driving deadly terror attacks.