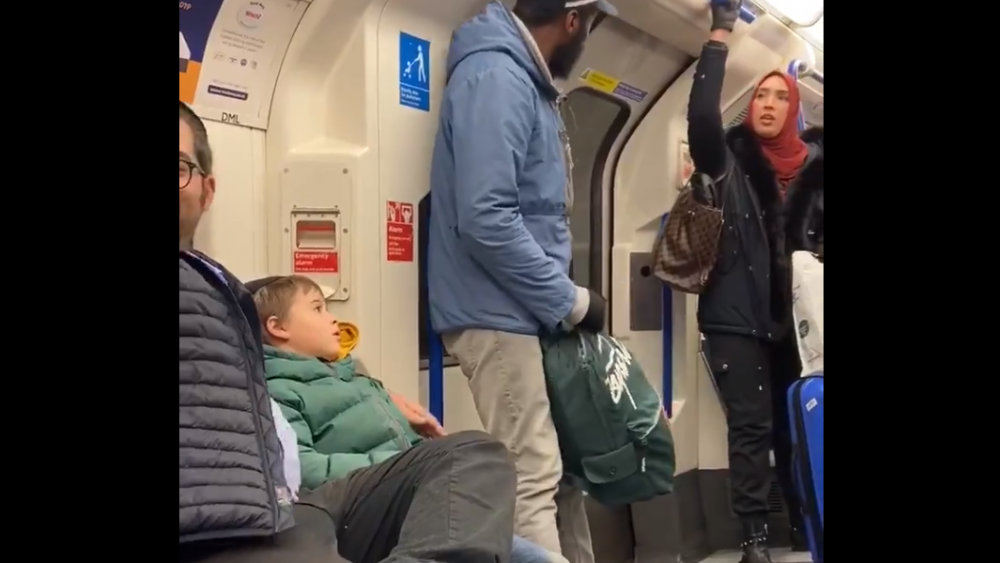 JERUSALEM, Israel - A Muslim woman is being hailed as a hero on social media for confronting a man who went on an anti-Semitic tirade against a Jewish family with young children on a London subway.

A video of the encounter has gone viral online and has been viewed by more than 5 million people.

In the video, a Jewish man is comforting his children while an angry man holds the Bible and accuses them of being apart of the "synagogue of Satan."

A warning to viewers of the video -- vulgar language is used.

Around noon I witnessed appalling anti Semitic abuse towards this Jewish Family on the northern line. Fair play to other passengers who stood up to him. If you recognise the guy please report to ⁦@metpoliceuk⁩ pic.twitter.com/YxzwAnDqTJ

"He… said in the Bible   [that]   Jews killed Jesus and they are all slave masters. I've lived in London for 20 years and you're used to people ranting on the Tube – it was only after a minute I realized, 'hang on this is really, really anti-Semitic," Chris Atkins, who filmed the incident, told the BBC.

Atkins said it was clear the man was targeting the Jewish children.

"It was the children that really got me and everyone else, he was just screaming at these children. It was horrific in every sense," he said.

One passenger confronted the man and tried to stop him from harassing the Jewish family. The angry man threatened to physically assault the other passenger and said, "I'm not no Christian pastor."

That's when a Muslim woman standing nearby stepped in to deescalate the situation.

"Come on man, there are children," she says in the video.

The man responded saying, "It's not my opinion, it's God's word"

"The Muslim woman… really, really took him to task, very firmly and persistently," Atkins said. "In this day and age we are told how intolerant everyone is and all religions hate each other and there you had a Muslim woman sticking up for some Jewish children."

"We were all intimidated by this man's behavior and we all tried to diffuse the situation the best way we could, but as a Muslim woman and mother I know what it's like to be attacked and dehumanized for my faith and I couldn't just watch and see this happening to another family with young children," she said in a statement to IlmFeed.

"I don't know who they are, but I hope the Jewish family see how this video has been received too and feel encouraged that racial abuse has no place in our city and will not be tolerated," she continued.

The survey reveals that anti-Semitism is on the rise in central and eastern Europe.