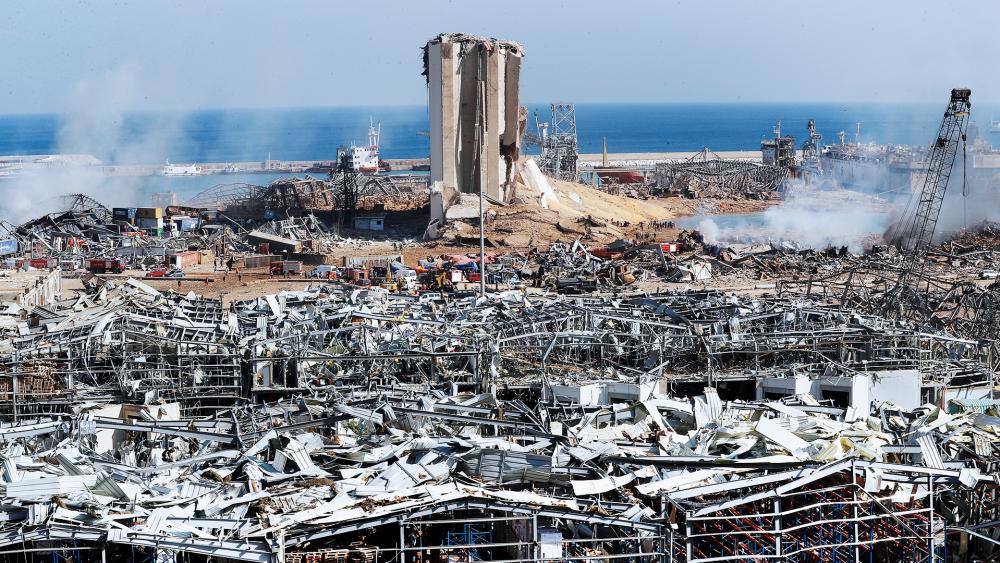 Damage is seen after a massive explosion in Beirut, Lebanon, Wednesday, Aug. 5, 2020.
6179203210001
Deadly Explosion Fuels Scrutiny of Hezbollah as Primary Cause of Lebanon's Economic, Security Woes

JERUSALEM, Israel - In the aftermath of the suspicious explosion in Beirut that killed more than a hundred and wounded thousands, Fox News reported that the port area was "unofficially" controlled by the Iranian-backed terror group Hezbollah.

With its thousands of Iranian-made rockets and its active military wing on Israel's borders with Lebanon and Syria, many people might think Hezbollah is only a threat to Israel. But the Iranian-backed terror group has been a major factor in bringing Lebanon to the brink of collapse.

Once known as the Switzerland of the East, and the capital Beirut as the Paris of the Middle East, Lebanon is experiencing its worst economic and societal crisis in modern history. And it’s mainly because of Hezbollah.

And that was before the massive explosion rocked Lebanon's capital on Tuesday.

“If this is a Hezbollah warehouse, which I cannot prove that now, this will be a very serious allegation against Hezbollah and maybe [there will be] more political pressure [for] Hezbollah to end its role as a military power in Lebanon,” said Yadlin, executive director of the Institute for National Security Studies.

“The Hezbollah problem is not just limited to the fact that you’ve got a terrorist organization funded by Iran with a massive arsenal of rockets and precision-guided munitions that face Israel.  The problem of Hezbollah is also the financial one,” said Jonathan Schanzer, Vice President of Research at the Foundation for the Defense of Democracies.

“This includes money laundering, terror finance and corruption and basically, Hezbollah has corrupted and corroded what was once a vibrant banking center.  It has now eaten it alive and there is right now indications that the banking sector is on the verge of collapse,” Schanzer told CBN News.

Religious loyalties and corruption have played a part as well.

“You can’t blame it entirely on Hezbollah.  You know, again, some of this is good old fashioned greed. Some of it stems from the confessional nature of Lebanese politics where the various groups, the Sunnis, Shiites, Maronites, are all looking to, kind of, take a piece of the pie,” he said.

“The Lebanese government is barely existing and things are going from bad to worse.  This bailout that is likely needed for Lebanon could exceed the largest bailout that we’ve seen to date, which is Argentina,” Schanzer said, of Lebanon’s request for some $20 billion in foreign aid.

Even before the coronavirus hit, Lebanese citizens took to the streets to protest the failing economy in their country, in a wave of unrest that started last October.

One Christian inside Lebanon told CBN News that this is the worst economic crisis in decades.  Even during Lebanon’s 15-year civil war the currency was stable and people always had work, he said.

After COVID-19: food shortages prompted massive handouts like this one organized by a Christian political party and paid for by wealthy Lebanese.

Churches, too, have opened and increased their food banks to help their own members.

Recently protestors called for the ouster of Hezbollah.

“Our message is heard, the French and the Americans are receptive, they have promised us to work on implementing (the UN Security Council) resolution 1559 which calls for the removal of all illegal weapons from Lebanese and non-Lebanese militias, especially Hezbollah, that has hijacked the Lebanese state,” said activist and protestor Nabil Yazbeck at a recent protest outside UN Headquarters in Beirut.

“Our message is that we respect the Lebanese constitution and its implementation and the implementation of resolution 1559 and that Iran does not dominate Lebanon, and most importantly, is justice to all Lebanese people,” said protestor Zeina Akal.

But Schanzer said the “probability of the UN being able to intervene effectively in Lebanon is zero.”

“UNIFIL remarkably operates on a budget of a half-billion dollars a year; 10,000 employees.  And what they accomplish is completely unclear to me and I think unclear to the American taxpayer, certainly unclear to many others around the world,” he added.

And the Lebanese army, which receives financial help from the US, has not taken action.

“The Lebanese armed forces don’t seem to be willing to counter the Hezbollah forces.  They’re not willing to remove any of the 150,000 rockets that Hezbollah has amassed in the country.  Lately, Hezbollah has been amassing an arsenal of precision-guided munitions or PGMs,” said Schanzer.

Once a thriving nation with a Christian majority, Lebanon is mentioned 75 times in the Bible. In Psalms, it says the Lord planted the cedars of Lebanon and the righteous shall grow like them.  Hiram sent cedars, the symbol of Lebanon, to build Solomon’s Temple.

Schanzer says the moment of truth for the Lebanese people to decide the fate of Hezbollah’s power in the government will be when the economy collapses.

After the massive explosion this week, this could be the time.