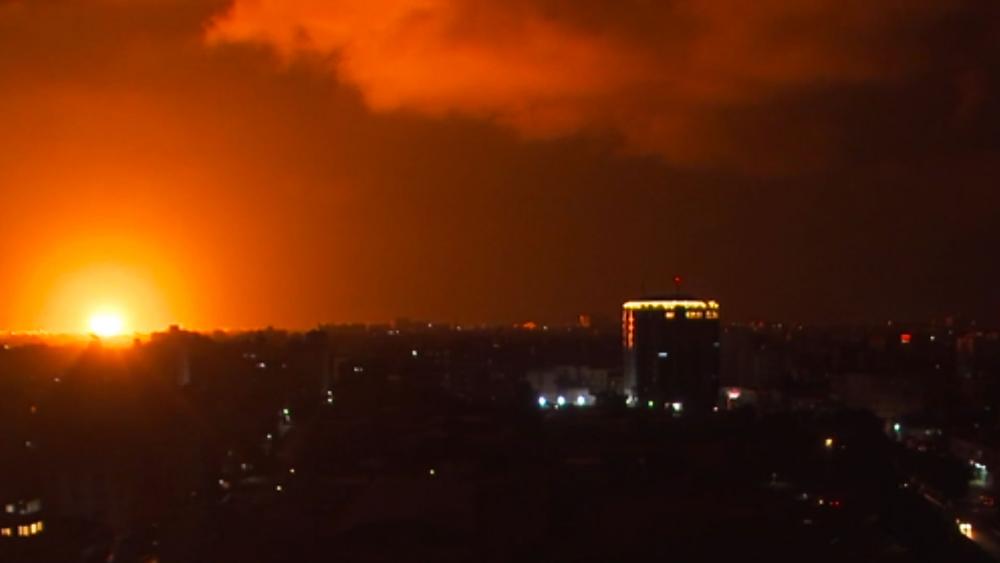 AP video still: Explosion lights up the sky with ball of flames after Israeli air strike on Hamas target in retaliation for recent rocket atttacks. 18 August 2020

“After a series of rockets were fired at Israel from Gaza earlier tonight, our Air Force just struck a Hamas military compound used for rocket ammunition manufacturing in Gaza in response. We hold Hamas responsible for all terror activity emanating from Gaza,” the military said in a statement.

Most of the rockets were intercepted by the Iron Dome Aerial Defense System and several Israelis were treated for shock. No casualties were reported and at least one person was lightly injured while running to a bomb shelter.

At least one home in the city of Sderot suffered damage after what appeared to be the engine of an Iron Dome missile fell on it, according to Israeli media.

“We didn’t hear the siren and suddenly there was a loud blast,” Shlomo Malka, the owner of the house, told Ynet news. “We got out of bed and ran to the bomb shelter. When we came out we saw everything was destroyed. The whole kitchen is in shambles, the food for Shabbat is ruined.”

From the shrapnel impact in Sderot

The rocket attacks follow a constant launch of explosive balloons from Gaza into southern Israel in recent weeks. Israel’s Fire and Rescue Service reported that at least 42 fires were sparked by incendiary balloons sent from Gaza throughout Thursday. The service said most of the fires were small and did not pose danger to people or property.

Israel responded to the explosive balloon attacks by shelling Hamas targets in Gaza.

Prime Minister Benjamin Netanyahu said Tuesday that Israel would retaliate against the balloon attacks by striking Gaza and warned the situation could escalate.

“I regret that we are also preparing, to the extent necessary, for the possibility of a round or rounds [of fighting]. I hope that we will not get there,” he said.