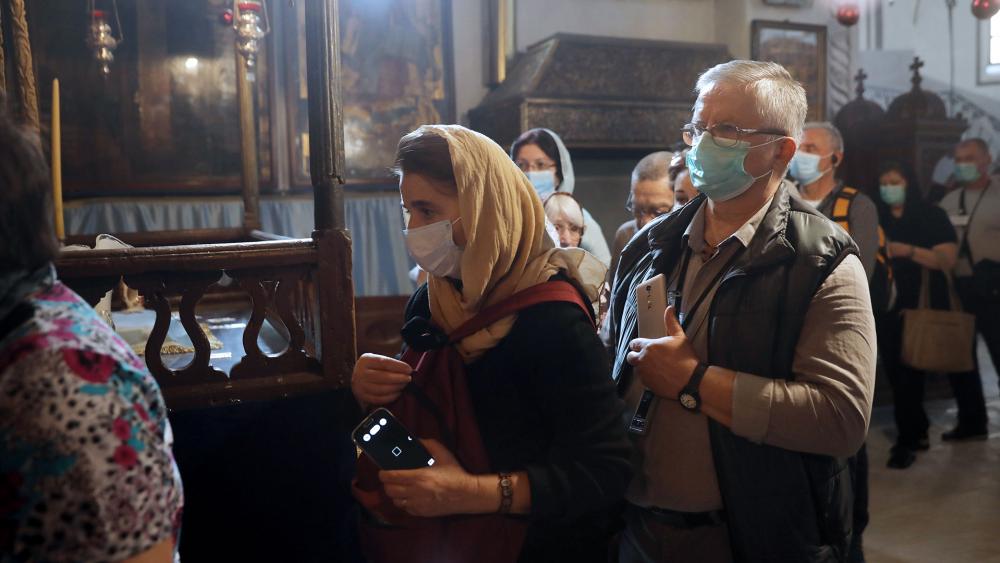 BETHLEHEM, West Bank (AP) - Palestinian officials announced Thursday the storied Church of the Nativity in the biblical city of Bethlehem was closing indefinitely over fears of the new coronavirus, weeks ahead of the Easter holiday that draws tens of thousands of visitors and worshipers.

The announcement by the Palestinian tourism ministry highlighted the spread of the virus across the Middle East, where worship at major holy sites has been greatly disrupted by the health scare. Iran, the epicenter of the virus in the region, said it would set up checkpoints to limit travel between major cities and urged citizens to reduce their use of paper money to fight the spreading outbreak, which has killed at least 107 people across the Islamic Republic.

The Church of the Nativity was closed after suspicions that four Palestinians had caught the virus, prompting a flurry of measures that included banning all tourists from the West Bank for an unspecified amount of time and shutting down other places of worship in Bethlehem for two weeks. If confirmed, the four suspected cases would be the first in the Palestinian areas.

Built on the grotto where Christians believe Jesus was born, the church joins a list of prominent tourist and holy sites to shutter their doors in the wake of rising fears over the spread of the virus, which has infected tens of thousands and killed more than 3,000 globally.

“We respect the instructions of the relevant authorities,” said Wadie Abunassar, an adviser to Catholic church officials in the Holy Land. "Safety comes first."

The virus has disrupted Muslim worship across the Middle East. Saudi Arabia banned pilgrimages to the holy city of Mecca, while Iran has canceled Friday's Islamic prayers in major cities.

The Church of the Nativity receives some 10,000 tourists a day, according to Palestinian officials. It is expected to welcome tens of thousands of visitors, many of them foreign tourists, during the busy Easter season. If the measures remain in place, the fledgling Palestinian tourism industry could take a walloping. Tourists currently in the West Bank were instructed to leave once their bookings end.

“We are in the peak of the season," said Palestinian tourism ministry spokesman Jeres Qumsiyeh. “Tourists are leaving and within days no single tourist will be in the city.”

In Iran, Health Minister Saeed Namaki announced his country's new restrictions at a televised press conference. He added that schools and universities will remain closed through Nowruz, the Persian New Year, on March 20.

“We will strictly control comings and goings,” he said.

Iran and Italy have the world’s highest death tolls outside of China.

These mark the latest disruptions of life across the Mideast from the new virus, which has seen over 3,740 confirmed cases in the region.

The Nativity Church, where scouts' bands march, multi-denominational clergy deliver mass and faithful pray during the Easter holiday, was set to close at 4 p.m. Thursday after being disinfected, said Qumsiyeh, the tourism ministry spokesman.

Other major places of worship in the Holy Land remained open. In Jerusalem, the Western Wall, the holiest place where Jews can pray, had no restrictions and the nearby Al Aqsa mosque compound was expected to welcome 50,000 worshipers for Friday prayers. The Islamic Waqf, which administers the site, encouraged the faithful to ensure good personal hygiene.

Israel, which has 15 confirmed virus cases, has taken strict measures in a bid to stave off an outbreak, including banning the entry of visitors from some 10 countries. With many tourists to the West Bank flying in through Israel's international airport, the Palestinians are likely also being affected by those measures.

The virus has started to shake Israel's tourism industry as well. Israeli airline El Al, which has cancelled dozens of flights to countries with a virus outbreak, announced on Wednesday that it was laying off 1,000 employees in a bid to cushion the economic fallout from the virus.

Earlier on Thursday, the United Arab Emirates warned its citizens and its foreign residents not to travel abroad amid the ongoing outbreak, a stark warning for a country home to two major long-haul airlines.

The country's Health and Community Protection Ministry warning comes as its capital, Abu Dhabi, sent 215 foreigners it evacuated from hard-hit Hubei in China to a quarantine set up in its Emirates Humanitarian City. They include citizens of Egypt, Sudan and Yemen.

Health officials warned that those traveling abroad could face quarantine themselves at the discretion of authorities. The UAE is home to some 9 million people, with only about 1 million estimated to be Emirati citizens.

Worship continued to be disrupted elsewhere, as Iraq canceled Friday prayers in the Shiite holy city of Karbala amid concerns about the spread of coronavirus, according to a statement Thursday.

Millions of Iraqis look to the weekly sermon delivered by a representative of Grand Ayatollah Ali al-Sistani for guidance every Friday.

Karbala, and the nearby Shiite holy city of Najaf in southern Iraq, attract millions of Shiite pilgrims, most of them from Iran, every year.

Two people who had tested positive for the coronavirus have died in Iraq, the Iraqi Health Ministry said. Iran's neighboring country Iraq has 39 confirmed cases, almost all of them Iran-linked.

Iraq also announced late Wednesday that it would halt trade between Iraq and both Iran and Kuwait for a week starting March 8.

Iraq depends on Iran for everything from food to machinery, to electricity and natural gas with an average worth of $14 billion annually.