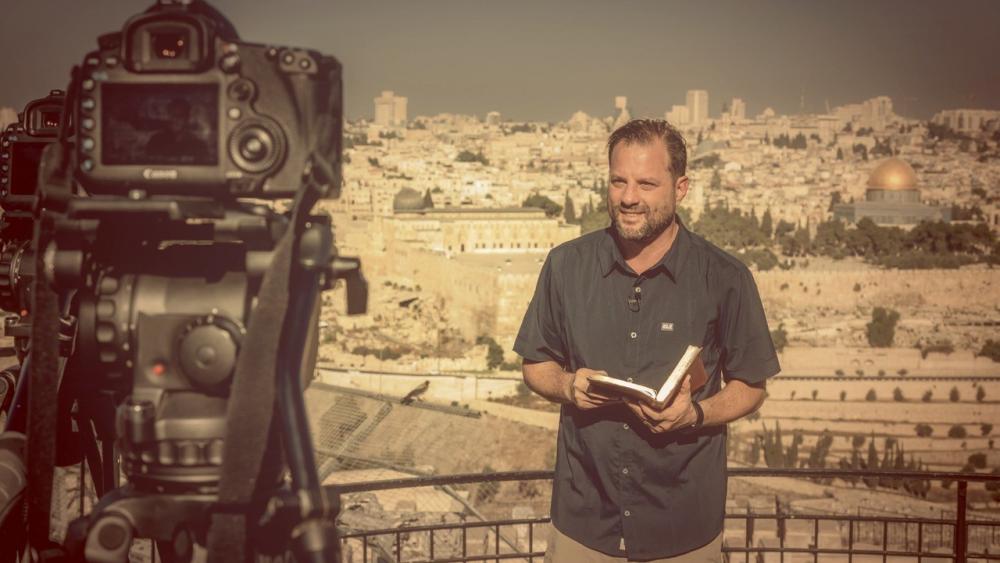 Photo courtesy: GOD TV
6156907777001
Israel Threatens to Shut Down Messianic Channel if it Evangelizes to Jews

JERUSALEM, Israel – GOD TV charges its freedom of expression is at stake over threats against its new Hebrew channel being broadcast across Israel. That's because Israeli authorities accuse the global media company of breaking the rules by evangelizing.

GOD TV recently launched a new Channel in Israel called Shelanu TV, which translates to “Ours” in Hebrew. The channel signed a seven-year contract with HOT Cable, Israel’s largest cable network, to broadcast stories from the Messianic community as well as other content.

“The goal of Shelanu TV, which is a partnership between GOD TV and the local Messianic community, including local Arab Christians, is to have a platform for Messianic Jewish artists and communicators to express their craft and to share their stories of how they came to believe that Yeshua is the Jewish Messiah,” Ron Cantor, the Israel Regional Director for GOD TV told CBN News.

The channel sparked controversy when the network’s CEO Ward Simpson said in a since-deleted promotional video that Shelanu aims “to take the gospel of Jesus into the homes and lives and hearts of the Jewish people.”

In a press release Wednesday, Simpson said the controversial video was “offensive” and poorly worded and the company immediately removed it.

The message in the promotional video could be considered a violation of HOT Cable’s broadcasting license because it is illegal in Israel to proselytize to minors and or use material means to entice someone to change their religion. GOD TV maintains that Shelanu TV adheres to Israeli law and does not proselytize.

“We would never do either of those things. It’s never entered our minds,” said Cantor.

Israel’s Cable and Satellite Broadcasting Council has launched an investigation into whether Shelanu TV is violating the country’s proselytizing law. If the council determines that Shelanu TV is indeed evangelizing, the channel will be shut down.

A statement on GOD TV’s website said it is Shelanu’s “obligation” to produce “relevant and dynamic content that will grab the attention of the Israeli people and open their eyes to the truth of their Messiah, Yeshua.”

“Please continue to stand with us in prayer that our programming will be effective in changing the stereotype of Yeshua as the enemy of the Jewish people and show them that he belongs to them and is their Messiah!”

Many in Israel could interpret that statement as proof that Shelanu TV does seek to evangelize, but Cantor argues "it is not illegal in Israel to share your faith" and shutting down the channel is a violation of free speech.

“We believe there is a serious threat to freedom of expression, in our pluralistic democratic society. The channel ‘Shelanu’ is no different than many channels today broadcasting content to the Ethiopian, Russian and Arab communities in Israel. It is absurd that anti-Israeli and anti-Zionist content is broadcast freely every day on cable television in Israel, and a pro-Israel Zionist channel like ours is under investigation,” said Avi Mizachi, a Shelanu board member. “We should be free to broadcast content of our community as well.”

But many in Israel disagree.

“The folks at @GODTV keep putting their foot in their mouth because they are simply [saying] the truth - they want to convert Jews! (But the real question is why the Israeli regulator missed this effort to have a missionary channel, and why other ones already exist, on Israeli cable?,” Yishai Fleisher, International Spokesman for the Jewish community of Hebron, tweeted.

“’We’re not trying to convert Jews; we just want them to accept Jesus as the messiah’: reminds me of when people say we don’t hate Jews we just don’t believe they should have the right to self-determination like everyone else,” Jerusalem’s Deputy Mayor Fleur Hassan-Nahoum Tweeted.

“Convincing Jews to accept Jesus as the messiah is the very core goal of missionary proselytizing. We strongly object to this type of activity, and that is how and why Jews have survived as a nation and preserved our ancient faith,” argued David Ha’ivri, an advocate for Israeli settlements who was worked closely with Christian Zionists in the US.

Israel’s Communications Minister David Amsalem said he was not aware that HOT Cable received a license to broadcast Shelanu TV and “will not allow any missionary channel to operate in Israel, at no time and under no circumstances.”

Asher Biton, Chairman of the Cable and Satellite Broadcasting Council wrote in a letter to HOT that he is considering shutting down Shelanu TV because of a discrepancy between what was written in the license application submitted to the council and the actual content being broadcast.

“In the application, it was said that the channel is geared toward the Christian population, while in fact it appears that the channel seeks to address Jews and to persuade them that Jesus is the messiah and they can believe that and still remain Jews,” Biton wrote in the letter. “This is fundamentally different, and had such things been known in advance, our treatment of this application to approve broadcast of this channel would have been different.”

GOD TV said it did not review HOT Cable’s application to broadcast Shelanu TV before it was submitted.

“We hope that any issue that needs to be straightened out between HOT and the Broadcasting Channel will be solved quickly, in order to preserve our freedom of expression and freedom of press,” said Cantor.

HOT has until May 19th to present a response to Biton's letter.