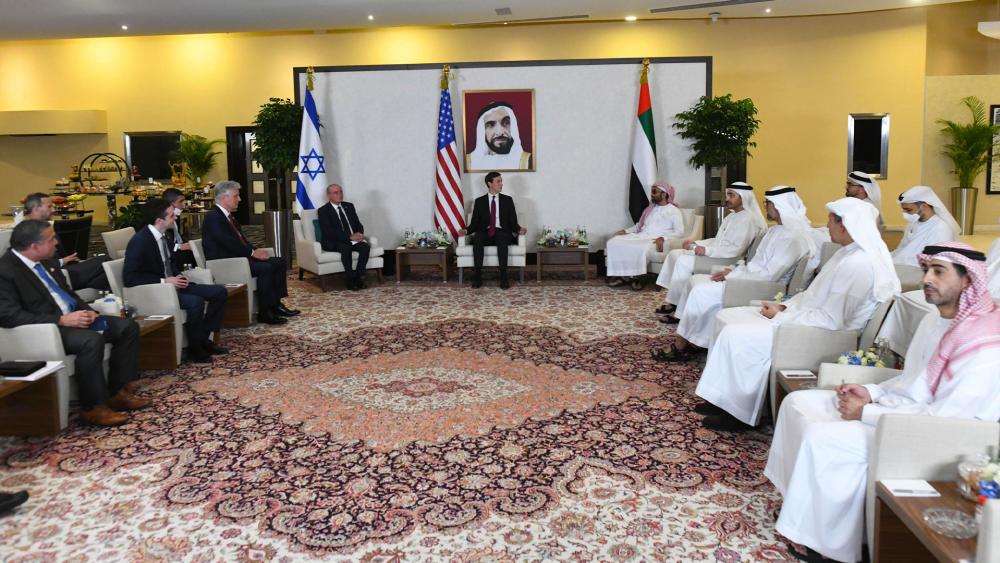 JERUSALEM, Israel – Members of the Israeli delegation sent to the United Arab Emirates came together Tuesday morning to pray and blow the shofar at a hotel in the Emirati capital ahead of trilateral meetings aimed at solidifying the details of the historic US-brokered peace agreement between the UAE and the Jewish State.

The quickly organized prayer service also included members of the UAE’s tiny Jewish community, who offered up prayers for the success of the new peace agreement.

The Jewish communities of the UAE welcomed the Israeli delegation at morning prayers pic.twitter.com/YNOQUIYSFR

“At this moment, and always, we feel proud to be Jews of the UAE. We wish the delegations success in their work and give thanks for the decisive and visionary leadership of the UAE’s leaders that has allowed for friendship with Israel,” Ross Kriel, the president of the Jewish Council of the Emirates — the Modern Orthodox community ­— told Israeli National Security Adviser Meir Ben-Shabbat, according to the Times of Israel.

The shofar is blown at a Jewish prayer service this morning for the Israeli delegation in Abu Dhabi, which as far as I'm aware, is the first organized Jewish prayer ever held in the UAE capital. pic.twitter.com/ncEZyoiMMP

Ben-Shabbat is leading the Israeli delegation to Abu Dhabi while President Donald Trump's senior advisor and son-in-law, Jared Kushner, is leading the US delegation alongside National Security Adviser Robert O'Brien, US Middle East envoy Avi Berkowitz, and other officials.

The delegations landed in the Emirati capital on Monday after taking the first-ever nonstop flight from Tel Aviv to Abu Dhabi and through Saudi airspace.

History Made! #BTS Jared and NSA O’Brien on the 1st commercial flight ever between Israel and the United Arab Emirates! pic.twitter.com/kdAHHtsRCs

The UAE government gave the delegations a red carpet welcome complete with kosher dining and Israeli and American flags.

Israel and the UAE started discussions about opening embassies in each other’s countries on Monday, The Jerusalem Post reported.

“Israeli and Emirati ministers, from foreign affairs to food security, have initiated their first official discussions on continuing and strengthening cooperation. We have already opened phone lines between the two countries and, as we speak, Israelis and Emiratis are collaborating on research we hope will lead to a breakthrough in the treatment of COVID-19,” the US, Israel, and the UAE said in a joint statement.

“All the countries hope and expect that in the near future our collective efforts will set in motion a cascade of positive changes, both large and small, that will put our respective peoples and the wider region on a solid path to security, prosperity, and peace,” in continued.

Israeli Prime Minister Netanyahu said during a news conference in Jerusalem that the historic flight and trilateral meetings int the UAE made it a “happy day for all citizens of Israel.”

Netanyahu invited Emirati leaders to Israel where he promised to also welcome them with a red carpet. The premier said this peace agreement with the UAE will look different than the ones Israel has with Jordan and Egypt because “it will be a warm peace.”

“It will be a warm peace because it is based on economic cooperation with an entrepreneurial economy similar to ours with very large economic capabilities, with investment routes, or, with a big money that is also looking for investment routes, and for the first time the State of Israel, which has received investments from all over the world, is going to receive investments in the Middle East, from the Middle East, this is a huge change,” said Netanyahu.